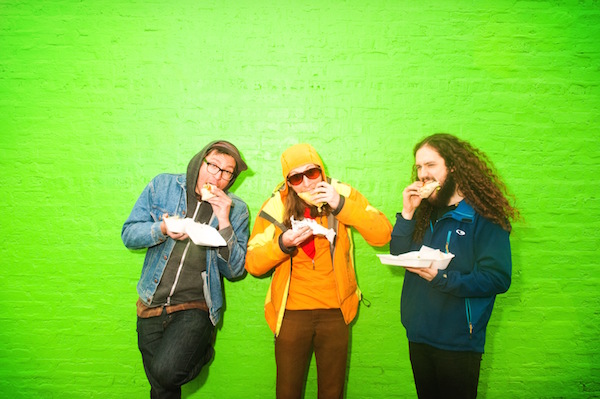 Photos of Oozing Wound above and below © Sarah Cass

Louder Than war interview with Zack Weil of Oozing Wound
Oozing Wound have been bringing thrash to a new audience ever since (and partly through) their relationship with long running and highly regarded American independent record label Thrill Jockey. They’ve also been turning heads amongst fans of the genre itself of course too, and with a strong work ethic have been putting out releases at a steady clip with their latest, Earth Suck, just dropping last Monday. Full of foment, bilious bombast and riffage to end all riffage, it’s a heady listen – so long as you know what your letting yourself in. Others may be in for having their worlds turned upside down for this release is from the far left field end of the Thrill Jockey roster spectrum.

Our full review of Oozing Wounds new album can be read here, but we thought we’d like to track down, via the medium of email, the band’s Zack Weil and ask him a few questions about the album and Oozing Wound in general. Check out what he had to say below the video for Going Through the Motions Til I Die.

Louder Than War: Traditional opener – who’s in the band, what do you all do and how did you form?

Zack: Well we got Ol’ Kevin Cribbin on the bass guitar, Crazy Kyle Reynolds on the skins, and me, your pal Zack Weil screaming in your face and gently plucking strings on the guitar. We have achieved our final form, assembled from the finest pieces of other Chicago rock bands. Never watered down! Always all-natural! That’s the genuine rock goodness you just don’t get from other brands.

I’m sure a lot of people have expressed surprise to you that you’ve been signed to Thrill Jockey – it’s not a label known for having a roster chock full of thrash metal artists after all – how did you come to get signed to them and how long did it take you to decide that they were the label for you. (This question comes with apologies if you’ve answered it 100s of times before!)

Zack: It’s a common question, for sure. The short version is that Bettina is the only one who asked if we wanted to put out a record. It’s weird because the three of us have been, collectively, in like twenty some odd bands in the past decade and none of them have ever made anything that struck as big of a chord as the Ooze has. I think it’s luck and good timing, and just playing enough shows to get to know other musicians who then introduce us to whoever. As to why she wanted to put it out? I think it’s because she likes it and because we’re fun and loud. 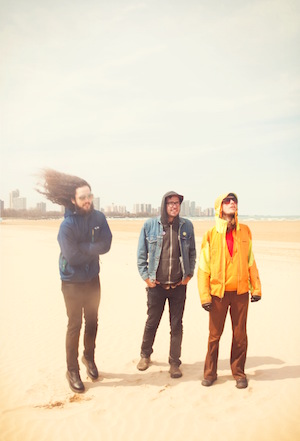 And in hindsight, how’s the relationship been – and do you feel they’ve done you justice?

Zack: Oh totally, dude. We cling to the tiny basement life because it’s all we know, and they have very lovingly tried to steer us towards being grown up musicians. We would be playing in the basement regardless, so it’s nice that someone believes in us to say that there are bigger opportunities. In the past year they’ve put out three records for us and done some crazy press shit, so I’d say it’s definitely been positive.

You’re from Chicago right? What’s the music scene like there atm? Are bands mutually supportive cross genres there and do you feel a strong local scene is still important in these days of the internet?

Zack: Chicago is a huge fucking city. I can’t claim to know more than maybe 1-2% of what’s actually going on, but in our little scene, shit’s pretty tight. The internet isn’t going to replace seeing an actual show in a shitty fucking basement where these smelly people are playing to other smelly people and pissing off the neighbors. It’s necessary for band fulfillment and music understanding for a listener. I didn’t even like shows when I was a teenager because it meant going to the city and seeing like a fucking Local H show at the Metro with a thousand fucking people surrounding me while I desperately clung to the guardrail up front and not being able to leave and pee. That shit is ridiculous. Basement shows, house shows, attic shows, dorm room shows, parking lot shows, under the bridge shows. It’s a community because it can’t exist independently. There are those who believe that the loss of one show space signals the end of underground music in Chicago but it keeps thriving and making new connections within itself. There is always a 19 year old out there willing to move into a house and try to make it the cool place against the odds of the city-wide crackdown of “raves.” It’s temporary and special, without this collection of basements we wouldn’t exist.

Your debut album, Retrash (our review), came out in 2013, in hindsight, happy with how it ended up? Anything you’d change if you went back to it today? And were you happy with how well it actually did?

Zack: We made that pupper in a day on no budget and before we met Thrill Jockey. We didn’t have a lot of time for changing things or noticing if something like a weird rattle or squeek was coming from the drums or whatever. I think it’s a cool record, it’s really harsh because of this fucking metal zone pedal our engineer Matty suggested that I put on the guitar. I think I used it on the Vape and Pillage tape too. I wouldn’t use it again, but it gives that record it’s certain unpleasantness that I find appealing. The reaction to the album though is fucking cool. None of our other bands have ever gotten this much notice.

How long have you known Brian Chippendale (Oozing Wound recorded a split with Black Pus earlier this year – our review)? Was your opening for him in 2013 the first time you’d met? And when / how was the plan hatched to do the split together?

Zack: Kyle and I met Brian maybe like 4-5 years ago, maybe longer. He was a big help with our old band Cacaw, we played like 2-3 shows with Lightning Bolt over the years. The split was kind of this idea where we would tour Europe together and that would be like a special item for that tour. Some shit didn’t quite pan out and so we couldn’t make it, but we’re gonna be playing a handful of shows in November on the East coast together.

In an ideal world where you could do a split release with any artist, alive or dead, together or disbanded, who would you choose?

Zack: We would do a sick lil duder with High On Fire, I think. Like two sides of a riff monster. It would be more my dream than anyone else, HOF included, I am sure. But I think it would sound fucking dope.

We should probably get round to talking about the new album – you’ve had an exceptionally busy year or so since your debut came out, when did you start working on the new one?

Zack: We’re always writing or coming in with new riffs so it’s hard to say when it started exactly. When Retrash came out we already had half of Earth Suck written, but we just come up with songs and see how they fit together. It usually organizes itself into place like we’ll write a slow song and then a fast one and then a weird one, or something. The themes and connectedness comes together later when you realize you’ve got somewhere around 20 minutes of material and it could be part of a larger whole. We didn’t know it was going to be an album until maybe January or something when we started writing the weirder B side material. We’ve got like 3 working songs on the back-burner right now, but nothing we’ve finished. Not sure what those will be for.

How long did it take to write and what’s your writing process?

Zack: Roughly 10 months from beginning to end, but it’s not such a black and white thing. I have a riff log that dates back to like 2008, just riffs and ideas that I don’t have any specific plan for. When we need something new I either come up with some new ones or check out some old ones. It takes roughly a month to finish a song with the full band once we settle on a main idea. I used to be the only one who would bring in the riffs, but the dudes are totally coming in with awesome shit these days. Next record will be even weirder.

Have you done anything differently this time round to Refresh?

Zack: Naw, same drugs, same jobs. Took a little time off for some life things, but all in all we’re just moving along the same path just deeper in.

What’s the inspiration behind your lyrics? Does much work go into them and how important do you consider them to be to the band’s makeup?

Zack: I kind of free write until something sticks out. I base it off of whatever vowels or syllabic shit I sing to myself most fits in. I think Keith Richards was on that tip, like it’s more important if it’s an “A” sound or an “E” sound than it is about the word you’re actually stating. He writes love songs and shit though. I try to keep it varied, look into weirder ways of expressing whatever it is I’m feeling without just coming right out and saying it. So I choose characters or whatever, or stories that have a neat premise and I can come up with a phrase or two that I wouldn’t be saying otherwise.

Do you mainly listen to other thrash bands or is your listening quite varied?

Zack: Nah man. I love me some thrash, and death, black, speed, all that shit, but I’ve always had broad tastes. Lately I’ve been jamming power pop and new wave bands, but it lives next to like Demolition Hammer and Absu. I get good ideas listening to pop structures and shit, we put tiny pop songs into giant metal songs but without all that melodic bullshit. Just ways to keep it interesting to us. Kyle just told me to listen to Bob Welch, sounds pretty tight.

Can you recommend us some bands we may not have heard of before?

What are your plans post-Earth Suck? We’d love to see you over in the UK!

To buy the album or for more info about the Oozing Wound hit up their page on Thrill Jockey’s website.

All words by Guy Manchester. More writing by Guy can be found at his Louder Than War author’s archive. You can also find Guy on Twitter as @guid0man.