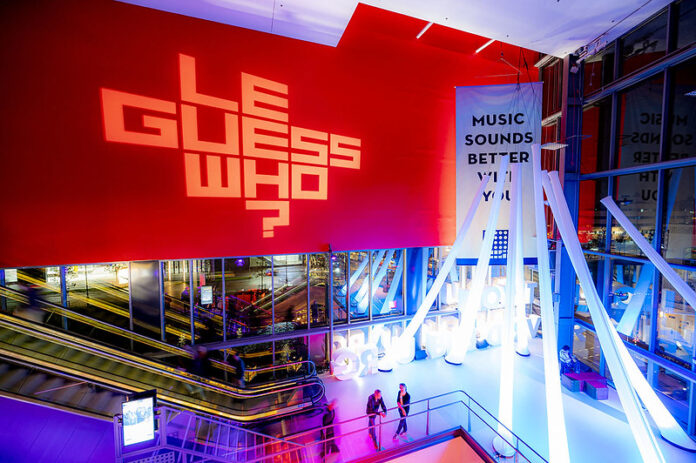 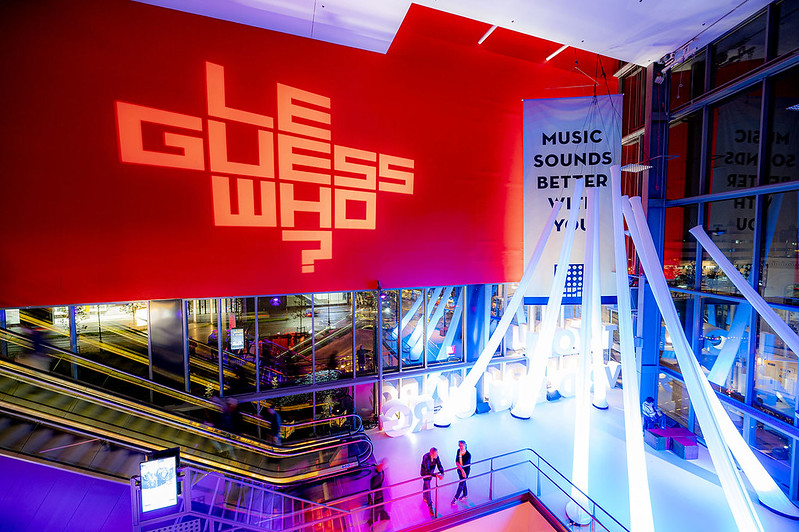 Adapt or die – the story of a festival continuing in the midst of a new and immediate covid lockdown.

‘Celebrate Change’, that’s what the organisers of Le Guess Who? pledged to do when they were forced to postpone 2020’s event to 2021 due to the global pandemic. And, as the vaccines rolled out across Europe, and travel restrictions eased it looked set to be a return to the triumphant years gone by for this Netherlands gem. The Dutch Government had other ideas.

Le Guess Who? 2021 gets off to a fine start on Thursday evening. Running at a reduced capacity with new covid-secure protocols (daily covid wristbands needed, masks encouraged), Day One’s live music centres around TivoliVrendeburg, a stunning venue a stone’s throw away from Utrecht Centraal station. Within the walls of this multi-story arts centre are five incredible individual venues each designed by a different architect and each ripe for a different type of music.

Ronda is home to the first act, Gabriels. Acapella Desree-esque vocals fill the room with singer Jacob Lusk at least two feet away from the microphone to start with. Dressed in a glorious gold gown and flanked by a trio of brilliant female singers, he proceeds to belt out some soulful ballads with an Antony Hegarty-style warble and depth that makes the hairs on your neck stand on end.

The curve of the Hertz auditorium can be seen from outside the TivoliVrendeburg and, once inside, is as grand as you’d imagine. With layers of seats in what feels like the gods, it’s the perfect place to catch the solo folk-infused vocals of Shannon Lay. Lay cuts a lonely figure on the stage but her soft and soothing tones fill the room with lyrics of love and hope in the likes of Time’s Arrow, which would not be out of place on a Nick Drake album.

The Grote Zaal is the largest space, a grand hall akin to the Barbican in London. It’s here, we see curator Phil Elverum take to the stage with collaborator Jay Blackinton for The Microphones one-song set. It starts with what has to be the world’s longest lyricless intro, at which point some listeners give up and leave to check out other bands, missing the fragile and witty story shared in Elverum’s relatable lyrics. But it’s the building vertical guitar bass combo which really impresses, shrinking back into finger picking simplicity before rising once again. To some, this is over indulgent – to others a sonic sensation. Either way, it isn’t a patch on Elverum’s last Le Guess Who? performance as his moniker Mount Eerie in Jacobikerk in 2017, since released as the (after) LP.

Day Two starts as normal, but we’re hearing rumblings around a potential lockdown for the Netherlands and learn there will be an official Government announcement at 7pm. Uh oh. We try to put that to the back of our minds as we head south to De Helling – the perfect dark, small and loud venue for the first dose of metal in the form OvO. The Italian duo consists of drummer Bruno Dorella and singer and guitarist Stefania Pedretti. The former creates a thundering backbone for the jaw-dropping vocals of the latter, her voice high pitched and timid when introducing the songs before transforming into a coarse, powerful vocal beast when put to music.

From here, it’s a short walk past a huge water tower to LE:EN, a Japanese fusion restaurant with live music venue attached. You’re instantly stuck by the sweet smell of sticky rice and exotic spices, but you’re forced to walk on by as you enter the doors to a dark large room filled with people and dry ice. Reymour are another duo, this time from Belgium. Luc Bersier tinkers with the keys to create indie pop riffs while singer Lou Savary brings a lush French lyrics to life drenching them in romance and mystery for non-French speakers. It’s music to tap your toes and sway too and hits the spot on a Friday afternoon.

It’s a fair trek north through the winding streets to Stadsschouwburg for one of the line-up’s latecomers, James Holden, who was added to the bill after William Basinski dropped out. The English electronic pioneer is joined on the bare black stage by Polish alto clarinetist Waclaw Zimpel in a pairing up there with the likes of King Creosote and Jon Hopkins. By this time, we know we’re entering into a partial covid lockdown which will begin the following day. The festival organisers are frantically trying to re-arrange things so that some semblance of the festival can continue through Saturday and Sunday, but the Government isn’t making it easy requiring everywhere to close from 8pm.

It’s testament to the determination and agility of the organisers that Le Guess Who? 2021 is not cut short there and then. They undertake the mammoth task of rescheduling Saturday’s line-up so that everything finishes by 6pm when the lockdown comes into effect; and also bring Sunday’s gigs forward to finish at 8pm in line with the new curfew and migrates them to seated shows – in keeping with the guidance. We lose a few acts along the way, but in the scheme of things it meant that Le Guess Who? remains a four-day event rather than existing as half a festival this year.

With everything kicking off earlier, LA three-piece Automatic (not to be confused with The Automatic) opens Saturday’s bill with an early afternoon show in De Helling – and what a show it is. Nonchalantly cool Izzy Glaudini delivers lead vocals for much of the set with songs about love and apathy, parties and pain. Drummer Lola Dompe takes the lead on a few tracks, sometimes from her drum kit seat, other times strutting round the stage. All the while, bassist Halle Saxon Gaines rocks her Siouxsie Sioux tee – hinting at their influences – and completes the holy trinity with some beautiful bass. The synths give it that compelling 80s vibe, sniffs of early Cure at the darker end and Roxy Music with the bouncier tones.

Another short jaunt to LE:EN for Old Time Relijun, one of Phil Elverum’s picks who headed to the Netherlands from Portland, Oregon. The band formed in Olympia in the mid-90s but sound nothing like their musical peers from the same place and time. Singer Ben Hartman delivers the entire set with a crazed look in his eyes, spitting his words and shredding the guitar. His brother Aaron is on double bass, adding a layer of vocals when needed, while drummer Germaine Baca – who would not be out of place in Portlandia – smiles throughout leaving you wondering how this motley bunch came to form a band.

U? Festival runs alongside the main offerings and it’s here, in a recording studio on the outskirts of town, that we catch Dutch punk trio Paranoid State. By the time we arrive it’s one-in, one-out and it’s soon easy to see why as the space holds circa 20 people. Paranoid State wear their influences on their sleeves. Literally. Each one of them proudly wearing a different punk band tee, including Black Flag. They’re a solid post-hardcore punk three piece with angsty vocals (and the bulging head vein to match).

It’s a long trek back to the centre – although you can hire bikes and everyone cycles here – so we stick around for The Fire Harvest, a top choice. They’re one of those local bands that has earned a loyal following and there’s Dutch natives in here who know all the words to all the songs. The band has a distinct The National vibe to them and plays a rousing set of guitar-led indie rock that bears more than a passing resemblance to Jason Molina and Songs:Ohia. Soaring crescendos, passionate vocals and layered guitars the perfect blend to go out on a high before the early curfew kicks in.

The festival is centred around the TivoliVrendeburg – special in its own right – but what makes this truly immersive and diverse, alongside the expertly compiled line-up, is the range and quality of venues scattered across the city with lush canal-side walks to take you from one to the other.

Sunday lunchtime comprises another long walk to De Nijverheid for Amsterdam’s Marathon – raw garage punk delivered from the foot of a coffee factory to a sea of Sunday-grade festival-goers on fold up chairs and picnic benches. Round the corner, is a beach-style shack set up in which Juan Juan takes to the stage with their Houndmouth/Edward Sharpe and the Magnetic Zeros style big sounding Americana indie. It’s a short hop across a busy road to dBs for an intimate seated gig by another Dutch favourite, Nagasaki Swim. Fronted by local music student Jasper Boogard, the high-pitched vocals take us on a dreamlike journey through lyrics which cover the human condition – of trying, of failing, of getting up and trying again. Think The Boo Radleys meets Woodpigeon, real End of the Road Festival vibes.

It’s a quick dash back to the Grote Zaal for a visual and sonic treat in the form of Maarten Vos & Maotic’s Erratic Weather show. It’s a concept piece which combines live music from Dutch composer Vos – a mix of synths and traditional instruments such as the cello – with live visuals majestically carved out by French digital artist Mathieu Le Sourd (Maotic). It has the potential to be contrived, but it’s brilliant. Graphics switch from heavy rain to abstract concepts while the music ebbs and flows to create a sonic picture of the chaos of climate change. Everyone is absorbed, immersed and leaves with a lot more to think about than they came in with.

Drawing the festival to a necessary early close is curator John Dwyer with his band of many names, currently operating as OSEES. The gig is billed as a two-hour seated gig straddling the bill where other venues welcome two or three bands. The queues form early and it’s closed doors before they even take to the stage. Dwyer’s heavily involved in the set up, meaning the sound check kind of blends into the live set – which starts 15 minutes early. During the first song the audience is on its feet rocking out. Two drummers create these incredible foundations on which the guitars and vocals can stand strong and reach to the skies. Despite the sea of fold up chairs and the early start and finish, this show contains every element of a kick as rock gig and proves the perfect way to end a turbulent weekend.

We leave in total awe of the festival organisers who made this happen in the middle of a national lockdown which they didn’t see coming. Punters thank them by lapping up the early bird tickets and the hope that next year’s festival will return to the usual night owl hours it’s occupied in previous years.

All words by Laura K Williams. You can read more by Laura, here.