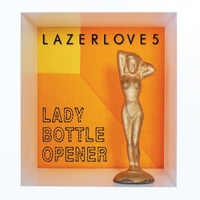 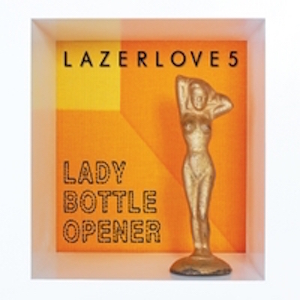 Lazerlove5 hail from Toledo, Ohio, but with guest spots from Minor Threat’s Jeff Nelson and Monochrome Set’s Bid, they have an international vibe and an eclectic sound on their latest album. Mark Ray investigates for LTW.

The airwaves are streaming with billions of digital tunes. Every sound vying for our attention, causing quick decisions on the like or dislike button in our head. So how do we choose to listen to what we listen to? In the case of Lazerlove5 it was because I love The Monochrome Set and I heard that Bid had appeared on their album, Lady Bottle Opener. On investigation it also transpired that Minor Threat’s Jeff Nelson had a guest spot. Pedigree indeed.

What gives kudos to the album is that after a few listens I forgot about my interest in Bid and Nelson, and wanted to hear more from Brian Nupp, the songwriter and main main behind the Lazerlove5 project.

The album opens with First and Last, a cool blues rocker, in the style of JJ Cale. I thought I was in for an alt-rock blues ride, but the rest of the album album takes me on a journey from East Coast to West Coast via Lambeth and through the 60s to the present.

Red Velvet Records is sung by Bid (The Monochrome Set) and I had to check the writing credits twice to make sure this was actually written by Nupp and not Bid. It’s a perfect Monochrome Set song that wouldn’t have sounded out of place on Love Zombies or Strange Boutique.

There is a Captain Beefheart sounding number called Philip Marlowe and two instrumentals: one an 80s sounding groove called 3 Up 3 Down and one a jaunty little number called Avocado Luck. There is a great cover of Robyn Hitchcock’s Do Policemen Sing?

When I See You has a 60s psychedelic groove with just a hint of East Coast Velvet Underground. Two more songs are dripping with the sixties acid groove: Distraction and Sunlight Shoulder.

Both Distraction and Sunlight Shoulder are little gems that deserve a wider audience. They are as near perfect pop/rock songs as you could imagine. Imagine Love mixed with The Monkees and you might get an idea. In a parallel universe these are massive hits.

Rock and pop is now into its 7th decade and all the genres and styles are there to be mined by those not only with the ear or the skill, but with the passion to translate and create something new from that great musical heritage. Brian Nupp is clearly a miner of subtlety and skill.

Nupp sings on Distraction: I’m getting on a train and I don’t know exactly where I’m going. Neither does the listener, but it’s a great trip.