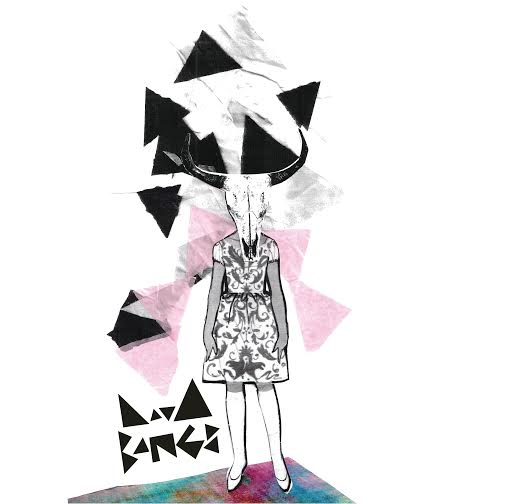 Sure there’s two girls, so riot grrl is a lazy comparison, right? Well no, not in this instance. Well, it could still be considered lazy but it’s also not inaccurate. That’s if you take riot grrl to be music thats serious and simultaneously fun – music that actually thrives on that contrast. Bands be damned Riot Grrrl is an idea and an approach – and it’s one that Lava Bangs have mastered.

Yes lead singer SaraBeata belts it out like Kathleen Hanna, proud, punchy and with each phrase lined with a mischievous tone. Moments also have the unrestrained energy of Belinda Carlisle as she shimmied through the noise of the Go-Betweens (take ‘Little DJ Helper’ as an example).

The songs are strong too, not just in melody but in arrangement. The tunes are constructed smartly, everything’s big and makes the most of the pared down three-piece line up. From the opening riff of ‘Ouch’ , the dynamic between the bass and guitar lines is immediate – guitar parts get to flutter while rock-solid rhythms pound high and low.

There are moments here that are complete knockouts. ‘Little DJ Helper’ has thrashed chords that propel the song through its with accompanying lyrics ‘I just want to hurt you!’. Whether its intentional or not, the song evokes the idea of beating up a DJ’s assistant (for playing shit songs). Who doesn’t empathise with that feeling of pity becoming pure anger as some arrogant prick pumps out shit track after shit track. Then middle eight truly jives. Its motorik and the relentless good-time groove feels like a Stereolab song from their happy spectrum, something from ‘Dots And Loops’ or ‘Cobra and Phases Group Play Voltage In The Milky Night.’

This is punk music for Manga cartoons or maybe punk music by Mange cartoons. But this is a three piece of Manga cartoons that live in Sweden and have accordingly absorbed that rich heritage of pure pop perfection. Take ‘Tiny Spoon’, it’s in part Bergman Rock and Marit Bergman. Sure, maybe not everyone knows who they are in the UK, but with Bergman in their names you know they’re good. Like Lava Bangs. Listen to this and you’ll instantly recognise that this is a fantastic guitar band.

This is Jon Falcone’s first review for Louder Than War.