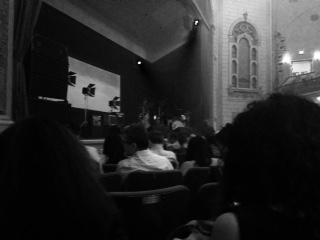 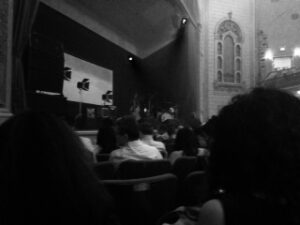 Everyone loves a British music invasion when it happens across the pond. On show this time was Laura Marling and her esteemed support acts Johnny Flynn and Marika Hackman. Clive K Hammond visited the Town Hall to report back on the cooled Monday night session.

New York’s Town Hall is one of the city’s oldest music halls. It is aligned to Carnegie Hall in legacy and remains at the hub between Times Square and Bryant Park. This old, archetypal theatre housed Britain’s Laura Marling and her friends.

Across the entirety of Monday’s showcase, a raw, fervid landscape was painted by Marling; typified by the bleak musicians accompanying her on her headline cavort throughout the States.

Marika Hackman – an ill-advised, one time model of Burberry sunglasses – remained translucent; her bleak acoustic temperament a direct conflict with the character she took on stage. Ardently charging through ‘Cannonball’ – a quaint, idyllic piece, stripped down to its quivering heart, the track is a flashback number that remembers the beauty of the past – one moment, her cold melodies that evoked a subtle shade of Elena Tonra would soften and her endearing shyness would resonate; warmly accepted by the ever appreciative New York crowd.

“I don’t normally look like this,” Hackman began as she looked toward her pyjama like attire. “Just I didn’t pack enough summer clothes. Didn’t realise it was this hot.” That introverted allure those Americans love.

Johnny Flynn – like Hackman – was retiring; allowing the vast size of his alternative folk sound to establish a root between audience and musician. Few words were needed. The pictures and images Flynn generates through his insightful phrases are matched only by the towering magnitude of his voice. During ‘Murmuration’ – a number etched with complex rhythmic passages that would evolve into shuffling blues stabs from his wiry six string – his voice was delicate; drawing pictures of starlings flying, freedom. It erupts, then, into a voice that would adorn any XFM turned Radio 1 pin-up track. The soul touched vitality that smoulders becomes harsh, yet isolated. They lapped him up. ‘The Water’ united him with Marling. Harman then joined in on some backing vocals to create a scene fit for a 1950s variety show; the girls bopping their heads in to hum backing vocals whilst hitting various bits of percussion – Flynn bopping happily away to himself.

Were it not for Marling they would probably not have been afforded such a royal venue to display these bitter talents. And true to form she was no different.

With the deserted visuals draped across the backdrop, Marling and her backing duo entered. Silence. The stinging ambience of ‘Take the Night’ meandered through to ‘I Was An Eagle’ – stubborn, floating vocals that followed the double bass precisely, Marling’s voice would abandon her to simmer throughout the room as the tribal groove underpinned the shimmering, brittle guitar below. Murkier still was the follow-up medley; ‘You Know’ – influenced by Ben Howard and given depth by Marling, it was harrowing the verve that exploded as her voice crunched through its chorus – moving into the resilient ‘Breathe’ – ‘us of constant banging, throwing first against the wall, screaming at the earth for what, it’s done to one and all,’ depicted the twisted resolution of a reborn victim. Journeys given weight by their message. The music behind just as stark.

The ice thawed through ‘David’ – her vocals now completely awakened and the enraged tone that is accustomed with all things Marling grew – and by her rendition of Dolly Parton’s ‘Do I Ever Cross Your Mind’ allowed the mood to become less desolate. Bursts of reflective noise erupted from her guitar routinely – the delicate finger-picking truly hardened against the coolness of her voice.

There has always been a reservedness about British performers. So even as Marling would occasionally confront her crowd, everything remained respectful. She is a commanding presence. When her vocals decide to roam between that borderline American twang and PJ Harvey, it’s shivering, compulsive to watch.

Here there was a true sense of British camaraderie. All for one and all that. Routinely the likes of Hackman and Flynn would enter to help pad out the sound. Hackman most noticeably on ‘I Feel Love’ – the track was meant to have another guitarist on board, but Visa issues wouldn’t allow it, so Hackman stood up to take on the solo and a national television broadcast. This new single has a real edge to it. Built around a driven combination of drums and bass, Marling fiercely hashes out the chords. There’s bounce. Bite. And her voice is enormous. It’s followed by a cover of the Foo Fighter’s track ‘Tired Of You’ – an arrangement not unlike The National’s ‘Afraid of Everyone’.

Her performance closes with Flynn, Harman and herself. The whole gang. Flynn moves between violin and trumpet. The girls singing through the massive ‘Rambling Man’.

And as the Marling show moves on to LA, the only question that remains about the three is, how moody must their tour bus actually be?

It’s impressive to see three musicians with their instruments generate such a buzz over 7000 miles away from home. New York did them proud. And they did us proud.