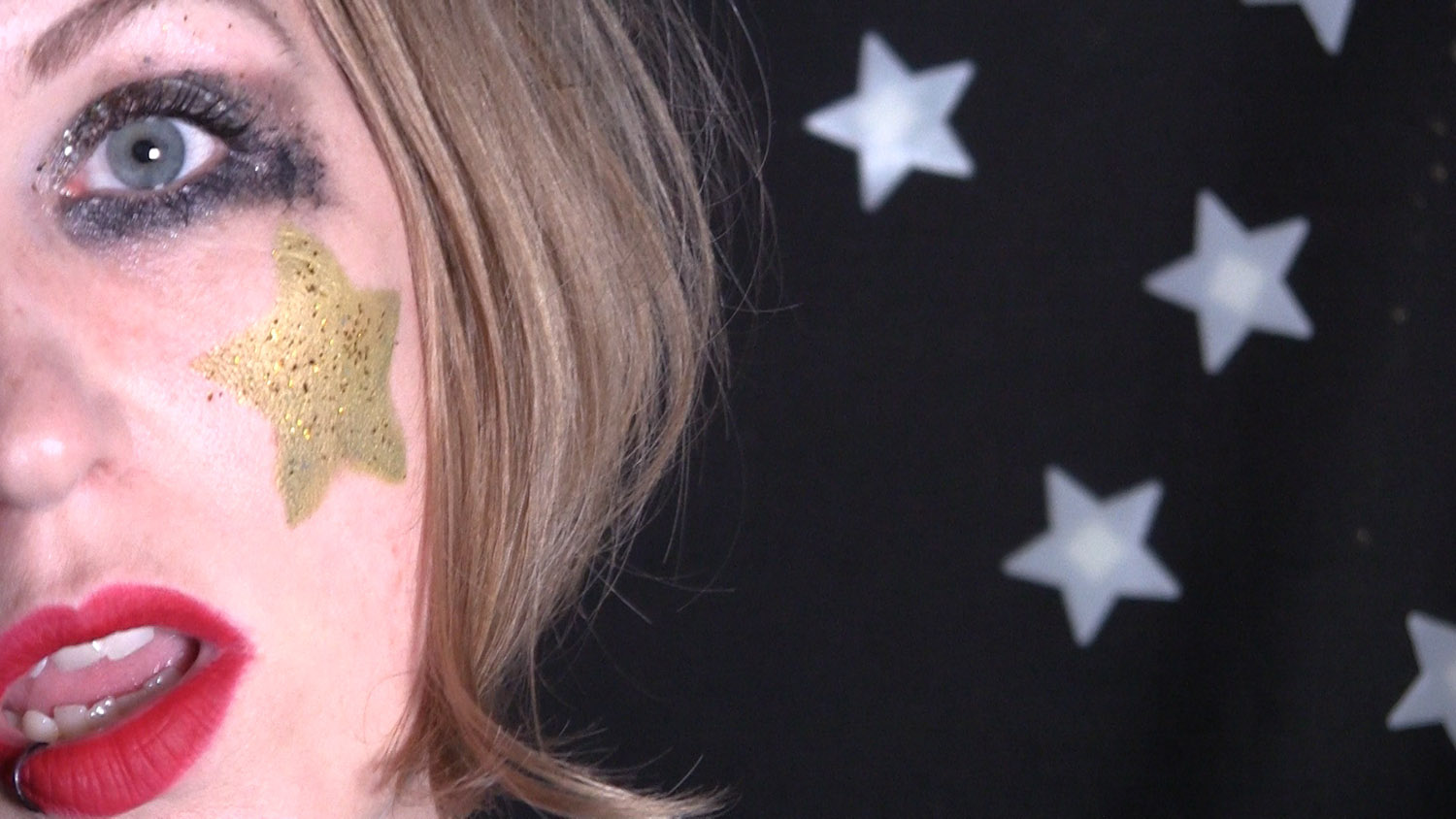 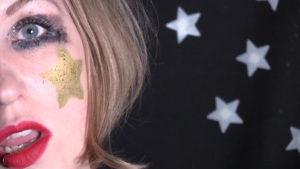 Bristol based singer-songwriter Laura Kidd performs under the stage name She Makes War.  Laura speaks to Louder Than War about an exciting year and the release of her new album and single.

I first came across She Makes War a couple of years back when she toured with the mighty Levellers and ska legends The Selecter.  I was immediately struck by Laura’s intensity and the power of her frequently dark lyrics.  Everything is wrapped up in pretty melodies revealing a very appealing and interesting whole.  For me She Makes War is all the more absorbing because the listener is rewarded for repeated listening.  Her secrets need a little time before they are fully revealed.

She Makes War released her third full length album, Direction of Travel in April this year and make no mistake it is hard hitting as ever as it takes you on a journey through the world’s ills.  She Makes War even features a duet with Levellers frontman Mark Chadwick, on “It’s Time To Be Unkind, ” it’s a powerful song and one that Laura tells me was forged as a result of her touring with the Levellers.  She also admits that it was a surreal experience.

“It was a great honour to be invited on tour by The Levellers and it was tons of fun – especially in Europe where I lived on a bus with the guys and their ace team for 10 days. I’ve played a lot of big venues in the past in other peoples’ bands (Tricky, The Penelopes, The Young Punx) but it obviously meant a lot to be playing my own material on those stages. The best new thing I learned was to cut down my already speedy stage clearing post-set to under 5 minutes, as there was a very short changeover between me and The Selecter. Never be the support band who overstay their stage time!”

“Very surreal, yes! The Levellers and their team are a family, they’re very close but also very welcoming to guests, so we spent a lot of time chatting after the shows and as I was booked in to record the bulk of Direction Of Travel right after the tour ended I mentioned it a few times. One night Mark asked me if he could be part of it and I rewrote “Time To Be Unkind” as a duet specially for him. We recorded at The Levellers’ gorgeous Metway Studio in Brighton and watching him unleash that textbook Chadwick rasp on my song is an experience I’ll never forget.”

Of course She Makes War has supported a wide range of artists as she builds her following.  A tour earlier this year with Brian Jonestown Massacre so nearly ended in disaster when Laura did a Dave Grohl and fell off the stage badly breaking her foot in the process.  Despite sustaining such a serious injury Laura was onstage less than an hour later to play her set.  To her credit she also fulfilled a string of festival appearances this summer into the bargain.

“I fell off the front of a stage at the end of soundchecking to support The Brian Jonestown Massacre because the stage lights were turned off with no warning just after I stuck my leg out to walk down the steps. I’d never broken anything before and it didn’t cross my mind to cancel the show, so I went on stage with my band 45 minutes later. Definitely the most painful gig I’ve ever done! 4 months on and many osteopathy sessions later, I’m healing well thanks for asking, but it still hurts every day.”

Whilst Direction Of Travel was released through the State51 Conspiracy She Makes War has the sort of vision, passion and attention to detail that means she is fully involved in every step of the process.

Laura plays most of the instruments and even worked on the production.  That suggests someone with a fiercely independent streak,  and I wanted to know where came from and if it had helped Laura’s career?

She told me that : “It comes from a need to express myself through music, art and everything between creating that and finding an audience for it. I write and produce my own music because I want to share truthful stories with people, rather than create art by committee. Along the way I’ve found some very talented individuals I trust to help me achieve that goal – engineers Matthew Twaites and Joe Garcia and mix engineer Dan Austin. They’re all talented producers in their own right as well but understand this is my project and are happy to support my vision rather than argue for their own ideas to usurp mine, as others have done in the past.”

At present Bristol seems to be a hotbed of emerging acts and independent talent.  Many Bristol based artists have become mainstays of the small and medium festival scene.  There seems to be something in that west-country air.  I wondered how She Makes War was involved in that scene.

“I’ve always been an outsider, but am very grateful to Bristol audiences and press for welcoming me over the past 4 years. It’s not a perfect place to be a musician by any means, but I had reached the end of my time in London and needed a change, and Bristol was just what I needed.

“There are some very talented people here doing great things, but a lot of typical smaller-city apathy and lack of ambition, too. Wherever you’re from, as an artist you should be looking to the wider world for adventures rather than being satisfied being a big fish in a small pond. Forget the pond – I’m searching for the sea.”

As mentioned earlier She Makes War’s music has a dark side.  Think of where you arrive when you mix grunge and punk with a liberal dash of pop.  To arrive in such a heady environment must be the product of a wide range of musical influences, so I asked Laura how her influences had added to her unique sound?”I love songs – strong melodies, meaningful, honest lyrics and instrumental hooks – and will always prioritise them over production tricks and perfection, but I’m also interested in creating my own distinctive musical world using sounds and arrangements that spark off some emotional resonance within me.”

“As a songwriter, arranger and producer I’m influenced by the work of Blur, Radiohead, Bjork, Hanne Hukkelberg, Broadcast, St Vincent and Suede (particularly their latest album Night Thoughts), but that doesn’t mean that I’m trying to sound like them. I think it’s more interesting to listen to music and think about what I like about it, then try and apply those ideas to my own songs as opposed to trying to sound like them.” 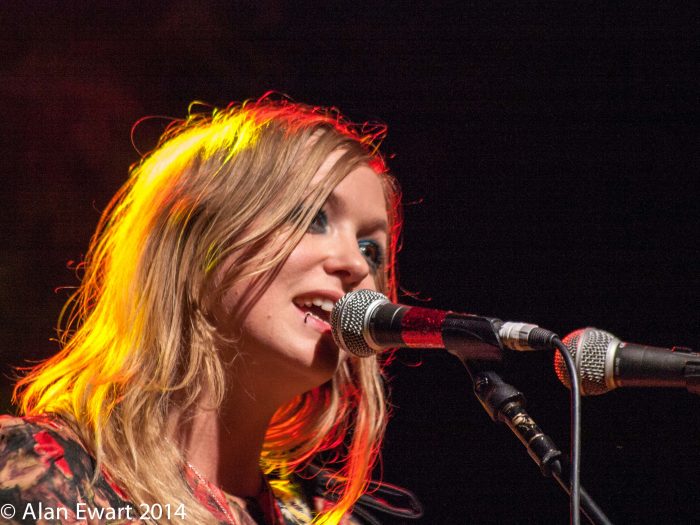 “As a massive Smashing Pumpkins and QOTSA fan I’ve always enjoyed the contrast of light against dark – my decision to downtune my guitar by a whole tone to give my high vocals more space to cut through was influenced by those sorts of rock bands – and while I love a good riff I also love creating beauty from sadness and injecting some humanity and hope.”

“I’ve always said happy songs sound like bragging to me, while sharing sadness and insecurities says we’re all in this together.”

Over the past couple of years many of our festivals have been accused of overlooking female talent.  I have spoken to a host of female artists in the punk and metal scene and if there is one thing that all seem agreed on it is the fact that female alternative artists suffer from a lack of opportunity in the music business.  The big labels and festivals seem to prefer sticking with pop artists, things that are safe and, if we are being cruel, pretty bland.  I asked Laura what could be done to break down those barriers.  She Makes War reflected the experiences of many.

“There is clearly an issue with female artists not being given enough representation at festivals, but that’s the end result of each individual band’s daily struggle which is working to get your musical project to a stage where it could even be considered for a slot alongside all the other bands vying for space. Festivals have to sell tickets, obviously, but could be doing a lot to redress the balance by giving smaller artists an opportunity to play on their smaller stages and of course, considering female artists equally alongside male artists.

“The competition is ridiculously fierce for festival slots, and if you don’t have an agent or anyone advocating for you then it can be utterly impenetrable, but there are more than enough worthy female artists out there who shouldn’t be being passed over.”

It is always refreshing to speak to artists like She Makes War.  Laura proudly ploughs her own furrow, working hard and pouring her heart into her art.  She needs to be heard, because like many who kick off the traces of the “pop” industry she has something important to say.  We owe a collective vote of thanks to musicians like Laura Kidd for keeping the UK’s alternative music scene alive.  The relentless touring, writing and recording is exhausting but when you have an artist who climbs onstage 45 minutes after smashing up her leg, you know you have found something worthy of being treasured.

She Makes Wars latest single “Stargazing” was released on 11th November and Laura is now out on tour in support of the single.  Full details are on her website.  Head out and catch a show, you will be royally entertained and a small investment will buy you Direction of Travel, a wise and rewarding investment.

You can follow Alan on Twitter at @soundofmysummer or on the internet at soundofsummer.org and you can read more posts by Alan at his author’s archive