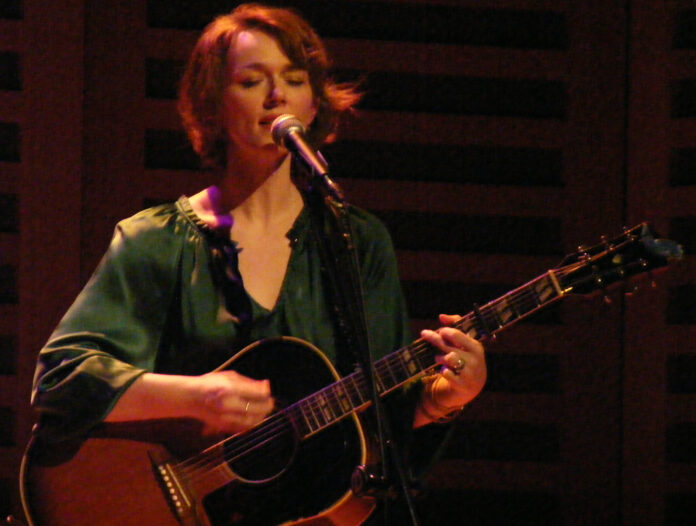 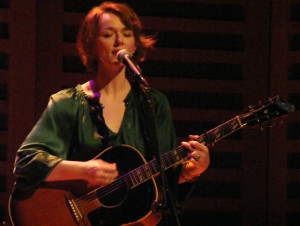 Country singer Laura Cantrell, championed by the late John Peel, performs old favourites and tracks from new album No Way There From Here at one of London’s newer venues.

Laura Cantrell was supported by another country singer, Sturgill Simpson, on this first night of The Americana Music Association showcase. He charms the packed crowd at Kings Place with songs from new album High Top Mountain interspersed with his gentle humour.

First looking at his late start on the country scene:

“The Trouble with starting your music career when you’re 35 is that the creative process is a lot faster than the mechanics of the industry. I came off the road and record a second album in four days.”

And then his polymath approach to song writing:

“I’ve made a country album about string theory, I’m not sure how that’s going to go down”.

His relatively short but relentless performance sets us up perfectly for tonight’s main event.

Laura Cantrell kicks off with a flurry of songs that get the audience in the mood, starting with Trains and Boats and Planes followed by the up-tempo California Rose. The contrast is an indication of her power to captivate an audience and take them on a lyrical, musical and emotional roller-coaster taking in the breadth of country styles. Tonight’s gig is also part Country Music history lesson with songs by greats of the genre such as Kitty Wells sitting perfectly next to contemporary songs from Laura’s records.

Don’t Break The Heart (from 2002s When The Roses Bloom Again) with its line “Don’t make the fatal error, of thinking you’ll find something better, cause you won’t”, flows nicely into songs from the new album, particularly its opening track All The Girls Are Complicated. It could be the answer song to Tim Buckley’s Understand Your Man with its theme of cherishing your woman, taking the rough with the smooth and not casually casting love aside.

Brilliantly accompanied by guitarist Mark Spencer, Laura brings each song to life. When Mark breaks a string with some enthusiastic playing on Kitty Wells Dresses, Laura thinks on her feet while he re-strings, filling in with I Gave My Wedding Dress Away (another Kitty Wells number). She explains afterwards how she always liked the song:

“It’s always been with me but I’ve also thought, ‘those hillbillies need some therapy’… cos that stuff is messed up.”  – Referring to losing your boyfriend to your sister and then giving her your wedding dress to wear. She’s not wrong.

The effortless blend of these lesser-known country gems with her new material continues on new album closer “Someday Sparrow” co-written with Frank Bruno (not the boxer). It’s an instant classic, getting its first live outing tonight, and is a real heart breaker alongside Cantrell’s finest. Letter She Sent continues in a similar vein with the sweet and delicate guitars weaved together between the two players, just as beautifully as their vocals are layered; Spencer proving to be the perfect side-man for Cantrell in every respect.

One of the real joys of Laura Cantrell’s music is the mournfulness of the lyrics and the warm confidence of their delivery; taking small stories and giving them huge emotional weight. They tug the heart strings on record, but live they are devastating and can bring grown men and women to tears. In country music sadness isn’t a dirty word; it’s an honest and true emotion,  just like all the rest.

John Peel felt the impact of Laura’s music on hearing her first album and without him, it’s fair to say, neither performer nor audience would be here this evening. Laura dedicates Not The Tremblin’ Kind to John at the close of the set, complete with flat picking from Mark that is beautifully intricate yet still sounds raw and full blooded.

As the left side exit from the stage isn’t actually open when they walk over to it, the old onstage / offstage encore routine is aborted and they go straight into playing more songs. Two Seconds particularly shines as the timeless classic it is; in time it is sure to become a country standard. And if  it’s possible for a guitar line to express longing, Mark Spencer’s variations on the original version do so with aplomb.

With Mark already joking that they should ditch the encore as “there’s whiskey backstage”,  it’s perhaps a risky move to remind him of this by playing The Whiskey Makes You Sweeter. But it is a perfect end to the evening with its tale of decisions made under the influence and the realisation that they might not have been good ones. No-one here at Kings Place, inebriated or not, will regret coming to this gig as all have been in thrall to Laura Cantrell’s songs with their universal themes, tenderly played and sung. They won the sell-out crowd over from the first note to the last.

Laura Cantrell’s new album No Way There From Here is out now on Spit and Polish.

Her tour continues this week: