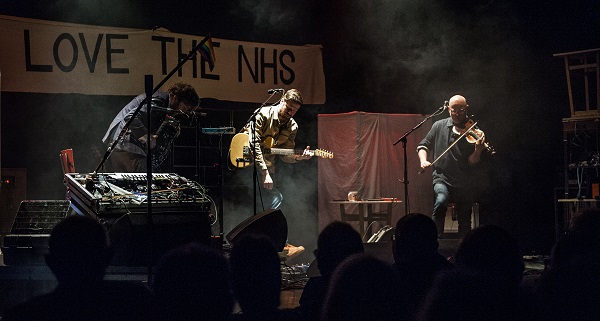 We were most impressed with their new Midnight And Closedown album (reviewed here) and just had to see the band touring the new songs. A hop and a skip and Mike Ainscoe is at The Met again to gaze in awe as NHS lovers, Drever, Green and O’Rourke mesmerise a healthily packed theatre.

And in fairness, this could well be a very short review; there’s not much you can say after being rendered  speechless by a band whose reputation for creation and innovation  is fully justified and well deserved. It might be hard to comprehend that they’ve developed into  a significantly better  outfit now that when they won the BBC Radio 2 Folk Awards Best Band for three years running in 2008-10 and the current set seemed to prove the point.

It’s a show of two halves. The first half cherry picking from their back catalogue that founded on a bed of music that is pure edge of the seat stuff. Hold your breath moments as you await the direction in which their creations are about  to move. 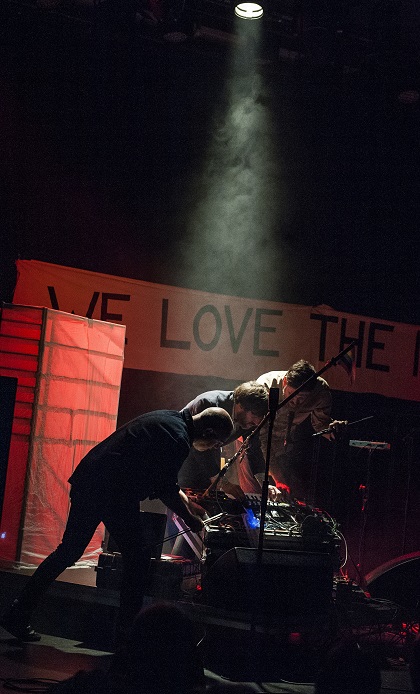 The second half came  dedicated to a slightly out of order but full treatment of the new album. Totally mesmerising and immersive, it felt like being part  a musical installation enhanced by a stage set provided a visual highpoint in its increasingly revealed eccentricity, inspired (maybe?) by the shipping forecast nature of the Midnight And Closedown phrase, all low key lighting – actually candlelit lanterns (presumably having passed a health and safety inspection) – unusual projections and all very Heath Robinson. A carefully balanced pile of wooden tables with a rope light next to Aidan O’Rourke at odds with his pedal board packed with the sort of electronic effects you’d associate more with The Edge or  Eddie Van Halen. Guess that’s what they call LauLand.

Picking a highlight, the throbbing confessional of Dark Secret segueing  into Toy Tigers would be hard to beat as the former may be up there with Ghosts and Throwing Pennies as a major song in the Lau canon.

In a similar fashion to the first half of their recent tenth anniversary tour when they huddled together in basic acoustic mode round a single mic as they would have done in their formative days, they showcased a musical intimacy that’s rare to see these days. That’s on top of gathering round Morag – the electronic box of tricks which forms part of Martin Green’s armoury – creating a musical recipe formed from experimenting with blending sound craftings with  patches of audience harmonies.

And just in passing, a mention for one of the best stocked merch stands not just on the folk touring circuit but I reckon anywhere and that comes from some serious gig going experience.  The guys are on tour again in June and you can bet that we’ll be first in a couple of queues if the same treat is on offer. And just wondering (a) just how much of the tip of the iceberg we’ve seen and how much lie beneath and (b) where Lau are going to be in 2, 5 or 10 years time.

Folk music? Maybe – but not as we know it (Jim). Stunning and stirring stuff.