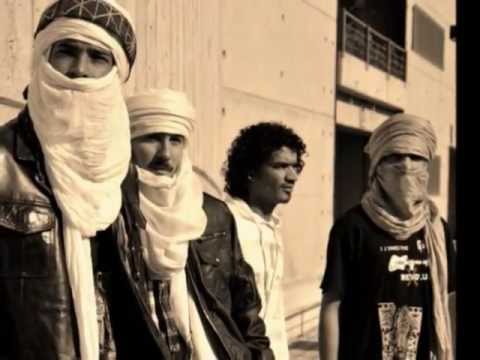 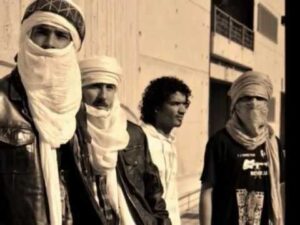 A singular place. Tamanrasset is the city where the Tuareg community of Northern Mali, Kel Tamashek people, ended their exile in the early 1990s, following the multiple struggles their community has been suffering since the 1960s.

Imarhan, meaning ‘the ones I care about’, is the story of a team of best friends, growing up inbetween the immentisy of the desert and a new city way of life.

Jamminhg around since 2008, they made their music education under the watchful eye of Sadam’s cousin, bass guitarist of their ‘older brothers’ Tinariwen, Eyadou Ag Leche. Highly experienced with Tinariwen, and genuine songwriter, Eyadou stimulates and helps them up to producing their debut album and composing, as well as some of their songs. Offspring is definitely under the best auspices.

The sound they create together is a genuine alchemy of their history; made of dry guitar riffs, of their blues Assouf, a pop of melodies and panafrican rhythms, coming simultaneously from the roots of the ancestral Tuareg traditional music, from African ballads, or from accidental pop and rock experiences, that Imarhan members have been listening to, while growing up. Imarhan is the voice of a new generation both affected about its people today’s issues and open to others’ cultures, crossed by mulitple waves and receptive to different artistic sensibilities.

From lullabies and soulful songs to upbeat ones, Imarhan create a rare symbiosis, assuming genuinely distinct style for precious and ecstatic listenings. A unique offspring for kel Tamashek people.