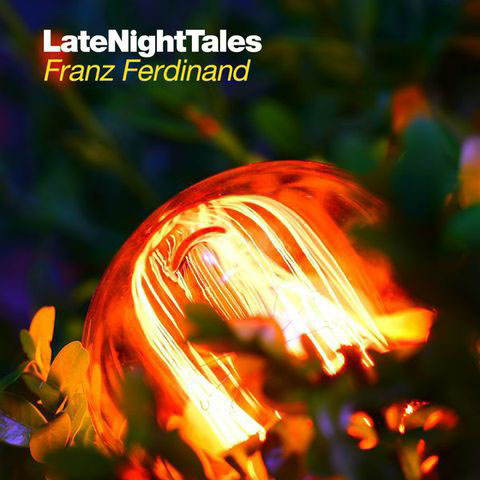 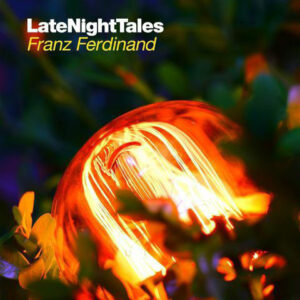 Just over ten years ago, word of mouth was spreading fast about a new Glasgow based band who were regularly playing in a neglected building in the Gorbals that they nicknamed the Chateau. Eventually these shows came to the attention of local cops, who quickly put the kibosh on all the fun.

Quickly signed to indie label Domino, the band’s debut single Darts of Pleasure with its frenetic Super Fantastisch finale demonstrated their commercial potential. NME gave them a front cover and proclaimed them The Band That Will Change Your Life and the rest is history; that history including Brit awards, a Mercury Music prize, Grammy nominations and, most importantly, four fine albums.

Just as Franz Ferdinand were starting to create a stir, a series of artist curated albums called Another Late Night was about to morph into Late Night Tales, which since 2003 has invited a succession of intriguing acts such as Air, MGMT and Midlake to choose and mix a diverse range of tracks aimed at creating the ultimate listen for the wee small hours.

Both Late Night Tales and Franz Ferdinand are still sounding remarkably fresh and they’ve now joined forces. Immediately the pairing seems a natural one with the band themselves kicking off the album with a cover of Jonathan Halper’s obscurity Leaving My Old Life Behind that brims with trippy guitars and sound effects.

A cover by R. Stevie Moore of I’m Only Sleeping from Revolver, stays with the hippy 60s feel as does The West Coast Pop Art Experimental Band’s Eighteen Is Over The Hill.

Throwing in a surprise is no bad thing in a compilation like this and soon the music swerves unexpectedly from laid back American psych to some thundering surf in the shape of Sandy Nelson’s classic instrumental Let There Be Drums.

It’s not the last time that Franz Ferdinand make use of an inspired segue. I would never have guessed that a 40 year old track by Paul McCartney & Wings would weave so perfectly into a slice of ambient electronicafrom Boards Of Canada; likewise, the move from the impossible cool of Perpignan’s The Liminanas into the vaudeville rap of Ian Dury’s Reasons to be Cheerful Part 3 is just somehow perfect.

Few of the tracks here are entirely obvious. There’s no Josef K or Fire Engines or, indeed, any of the other independent Scottish acts of the post-punk era that Alex Kapranos in particular has regularly paid homage to over the years, although a place is found for another group from Glasgow influenced by the sound of post-punk: the much under-rated Life Without Buildings, whose New Town reminded me just how strangely compelling the childlike vocals of Sue Tompkins could be.

Serge Gainsbourg’s Requiem Pour Un Con (Franz earlier, along with Jane Birkin, contributed a track to a Gainsbourg tribute album in 2005) is perhaps the single song I’d have predicted making an appearance here. It sounds incredible too, sandwiched between Zapps’ uber-funky More Bounce To The Ounce and Lee Scratch Perry’s Disco Devil in the distinctly danceable middle section of the album that also includes a cover by the Disco Dub Band of the O’Jays’ For the Love of Money and one of James Brown’s early seventies stabs at socially conscious music, the anti-drugs track King Heroin.

Brown, Gainsbourg, Perry and Can (represented here by Connection) have been favourite artists of mine for years now and their featured tracks are all interesting examples of their work – albeit the Godfather of Soul gets a little too preachy here for my tastes – but what really makes collections like this stand out for me is making new discoveries that have me rushing on to the internet to find out more about them – and in this case the aforementioned Liminanas and Carrie Cleveland particularly fall into that category.

Only towards the end of proceedings do I really get the feel of late night, particularly when Boards Of Canada’s dreamlike Reach For The Dead is followed by another couple of artists I’d previously been unaware of: Oneohtrix Point Never (with Zebra) and German techno producer Justus Köhncke’s odd but effective take on Neil Young’s Old Man.

The penultimate track, Sweet Mountain by Californian duo American Spring, features some of the most adorable harmonies you could ever wish to hear, arranged by none other than pop genius Brian Wilson, who at the time was married to Marilyn from the band. He also co-wrote the song and helped out on backing vocals and if The Beach Boys had chosen to record Sweet Mountain themselves, it would surely have even shone on their own best albums of the period such as Sunflower and Holland.

As is the norm, this latest Late Night Tales ends with a spoken word piece, a short story written and read by Alex Kapranos called Defibrillator about a band getting together with little chance of ever emulating the success of a Franz Ferdinand. I did enjoy it but I doubt I’ll want to hear it too often again in the future.

In the main, though, this is pretty much an impeccably chosen selection of songs for playing not only late at night but at just about any other time of the day and each of the four members of Franz Ferdinand, who all played a part in putting the album together, can be proud of their contribution to the latest instalment of this rightly renowned series.