Home News ‘Last Rockers – The Vice Squad Story’ : book about one of... 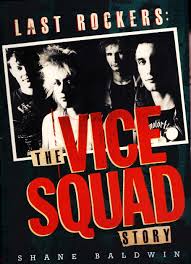 One of Bristol’s most successful music exponents of the early ‘80s is celebrated in a new book.

‘Last Rockers – The Vice Squad Story’ tells the story of the band that formed in the city in 1979 and went on to launch Riot City – arguably the most prolific record label of its type of the era and one that went on to dominate the independent charts in first half of the era.

The title has already been hailed “the best book about life in a band you’ll ever read” by Mark Brennan who runs Captain Oi, the biggest punk label in the UK today whilst celebrated music critic John Robb said “Vice Squad are living proof of the power and the potency of the British second wave of punk”.

The book has been penned by Shane Baldwin – the former Vice Squad drummer and now a successful music journalist in his own right writing for magazines including Record Collector and Vive Le Rock.

An early support slot with the Damned and the Ruts gained the Beki Bondage-fronted band a big local following, as did their track Nothing on Heartbeat Records’ Avon Calling compilation, which attracted the attention of Radio 1 DJ John Peel.

Vice Squad’s first two singles, Last Rockers and Resurrection, both took the indie chart by storm, establishing Riot City as one of the major UK punk labels, before the band were snapped up by EMI for a crack at the national chart.

The band became standard bearers for the scene that would become known worldwide as UK82.

It also chronicles the story of Heartbeat Records and Riot City Records, with contributions from label boss Simon Edwards.

And for its sins, it also tells the sorry tale of the monster created as a Vice Squad by-product, the world’s foulest band, Chaotic Dischord.

Shane Baldwin said: “A lot has been written about the British punk scene of the early ‘80s, much of it bitter, cynical and self-serving, and my book is no different. I just tried to pep it up with a few jokes.”