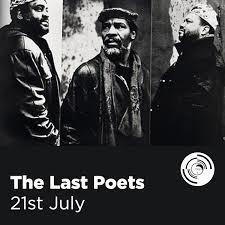 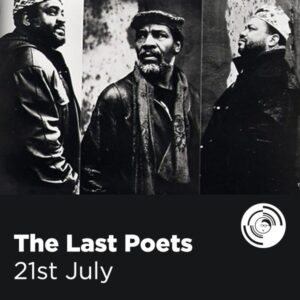 Band on the Wall, Manchester

The Last Poets – described by Chuck D as being “where hip hop started” – played a rare show at Manchester’s Band on the Wall last week. Nathan McIlroy tips his hat to a genuinely legendary band.

The Last Poets have long been regarded as the forefathers of Hip Hop. After forming on Malcolm X’s birthday in 1968, Last Poets became the credible soundtrack to the burgeoning Black Power movement and have not relented in promoting their message of higher consciousness since. At the time, the Nixon regime encouraged the FBI to watch them closely and their insurrectionary songs and unashamed black pride, terrified most of the white music press. Despite the mechanisations of both the music industry and state working against them, Last Poets self-titled debut entered the top ten and the group entered the history books.

Tonight sees original Last Poet members Umar Bin Hassan and Abiodun Oyewole recite tracks from throughout their career, backed by percussionist Don Babatunde Eaton who has played with this line up for over two decades. Hassan strides on stage to a rapturous welcome, only to redirect the adulation to a young Mancunian who had approached him during soundcheck;

On walks a young white lad with shaking hands clasping a torn piece of paper containing the poem he then recites to the packed crowd. His dignified message of struggling with poverty in “Austerity Britain” gets everyone on side immediately. It’s a great way to start the show and testament to the groups nurturing influence on a younger generation of poets.

Setting the scene with the “heartbeat”, Don Babatunde Eaton is an effortless player whose rhythms are an extension of his body and soul. He lays down a tribal rhythm on his congas as the two rappers pay homage to previous members of the group who have passed on or who ‘no longer answer the phone no more’ as is the case with Jalal Mansur Nuriddin. Nuriddin, or Lightnin’ Rod as he’s also known, was the other founding member who reconciled with the group in 2008 after years of bitterness which saw him stabbing Hassan in the throat in the early 90’s. Infighting isn’t rare between musicians but the lack of bitterness and genuine love and respect shown during this segment denotes a tender wisdom that is also evident in their lyrics which are as passionate as they are cerebral.

Thankfully, that incident didn’t affect Hassan’s ability to deliver rhymes like a be-bop preacher; his slight lisp gives exasperated character to the tracks, some of which were written when he was barely twenty one. Oyewole is striking in his resemblance to Gil Scott Heron. Or rather, Gil Scott Heron was striking in his resemblance to him. Gil openly acknowledged the groups influence on his music and his phrasing and delivery is heavily indebted to Oyewole who veers from crooning couplets to scat rapping about societal ills throughout. The two frontmen emanate truth and fully deserve the mantle of elder statesman despite being more relevant than a lot of younger rappers from recent decades.

‘Black Rage’ was heavily produced on record but tonight’s version is more striking in its simpler form of three voices and a drum, imploring young ‘baggy shadow street boys’ to recognise their worth instead of resorting to gang violence. The message is a positive repose to the stereotypes that certain Hip Hop permeates to young black men and white voyeurs in the suburbs;

‘Soon they will see their beauty, their strength, their love/and like the rivers flow into sea/they will unite as one/then our voice/will be more powerful than a gun.’

‘For the Millions’ is a breathtaking ode to ‘the millions who cut the cane, picked the cotton, whose names have been forgotten’ and should be studied in schools when covering Britain’s shameful history of slave ownership instead of merely celebrating British Values like the Tories have proposed. Besides, what’s more British than colonising and enslaving a continent then side stepping the issue to celebrate a more convenient re-run of history?

‘This is Madness’ is a heady trip which showcases the psychedelic and inventive rhythmic vocal patterns that influenced Funkadelic and Frank Zappa’s Mothers of Invention. Oyewole is as awestruck as the audience when watching Hassan let loose, taking the spiritual form of a Master Griot and elevating the crowd to his level.

Half way through Last Poets set there is a show stopping performance of “Niggers are Scared of Revolution” with a preamble to make the white liberals in attendance more comfortable. I can’t think of any current music that is comparable or that has the ability to challenge an audience and provoke a response like this. We have become so blasé about titillation and violence that most forms of supposed art are as toothless and coy as a dead carp. Although well into their 60’s, the group revel in confrontation but not for the sake of nihilism. Last Poets aim is to challenge and revolutionise thought, provoking a response from the depths of complacency.

Like Malcolm on his return from Mecca, Last Poets have undergone a transformation from seeing violence as the solution to preaching inclusivity. That does not mean they have lost any of their revolutionary fervour. Prior to the performance, I had not expected the Last Poets circa 2015 to have as much potency as their younger years but they tore the roof off and put commercial rappers to shame. They are humble enough to admit that they are just a vessel for the word, standing on the shoulders of giants whilst passing the tradition down. As America tears itself apart in a new era of racial tension and capitalist slavery continues unabated, Last Poets message is as pertinent as ever. If we only knew what we could do…

Branches of the Tree of Life: The Collected poems of Abiodun Oyewole 1969-2013 is available from 2 Leaf Press here.