Every word in this song has a double edge. These are the actual closing minutes of the venue.
Caught on an iphone it captures the very essence and mirth of it’s final moments of magic.

The 12 Bar Club in Tin Pan Alley closed it’s doors last night at 4am on Thursday the 15th of January 2105. With crowds of people literally hanging from the ancient Forge’s oak beams and rafters, while listening to an hour of captivating headliner torch songs from Vince McCann.

Vince originally opened the venue on its début night when it was known as The Forge back in 1992. He has been an integral part of the club ever since. Last night he sang ballads from likes of Don Mclean, Johnny Cash, and Townes Van Zandt, alongside standards such as You Are My Sunshine, Goodnight Irene, and Boney Fingers.

With 150 squeezed into the tiny but fully preserved Grade 2 listed venue that is ‘The Ancient Forge’ – and everyone singing along to the rousing choruses – with all the girls in tears this was a magical night of camaraderie for music lovers of all ages. With the crowd collectively joining-in in resounding and seemingly never ending sets of cheers for Vince McCann
(and the 12 Bar’s crew of 21 years) this is the London that you simply cannot bottle.This is the very real part of London that evolved naturally for, and behalf of, unsigned acts seven night a week, catering for all tastes and all ages. Its very success grew out of that particular magic. This is the London that the developers have stolen from us. And they have done this through stealth and by the very decree of ownership.

A corporate 800 seater ‘label bands only’ venue to be built directly beneath 26 Denmark St  is in fact the very antithesis of all that The 12 Bar Club stood for.

The 12 Bar Club is a Georgian building  which, if it existed in Holland, would be deemed to be a national treasure, but as this is London, the developer-freeholders can ride rough shot. In the capital in 2015 it seems that the freeholders can do whatever they bloody well like, while buying off TV News with tokenist verbiage. I really do hope that Consolidated hold to their recent promises and that these press statements do not prove to be utterly disingenuous. “The 12 Bar Club will re-open when refurbished”, they tell us. Let’s hope so!

Consolidated developments you do realise that the whole of London, the music industry, and the wider media will hold you to account here if these promises  prove to be utterly shallow?

Camden Council have simply not done enough here either. And the wider music industry has – until now – turned its back on Denmark St (with a few very notable exceptions). Guarantees from Consolidated developments are now sadly coloured by their “structurally unsound” comments about 26 Denmark St to a wider media this week. These words now haunt us all like a foretold soothsayer predicting the very spectre of accidental collapse when Consolidated lock off number 26 Denmark St and Denmark Place to “builders only” on Friday the 16th of January.

If this site at 26 Denmark St meets with any form of collapse, believe me, the entire music industry and sections of the press will be pointing their collective fingers in one very particular direction. This venue must be preserved exactly as it is. The 1635 Forge remains as a Grade 2 listed building with description from English Heritage. It must not be lost to redevelopment. The 12 Bar has to reopen here once again – even if it is renamed ‘The Forge’.

The Reasons The Campaign Will Continue …

Tin Pan Alley is the very living, breathing, street of music. It still features guitar maker workshops, rehearsal rooms, studio spaces, music publishers, venues, and guitar shops. Lets keep it that way. This is Britain’s resounding street of popular music. There is no equivalent anywhere in the world. Lets celebrate this wonderful street and bring even more music back to Tin Pan Alley in all of its vibrant modern diversity.

With local MP and former Labour Party Health Minister Frank Dobson very much on side, and a list of 25,000 who have signed the Change.org petition, only time will tell what will happen next regarding further ‘Planning Amendment Applications’ heading towards Camden Council from Consolidated developments. These will be known as ‘Stage 2’ and ‘Stage 3’ of this overwhelming construction process taking place throughout 2015, 2016, and 2017, when Crossrail 1 finally opens for business during that summer. One thing is for sure, the campaign is going to ‘Carry On Regardless’.

Music interview: Lucy Spraggan talks to Louder Than War about her new album Choices, getting sober and taking on the trolls. 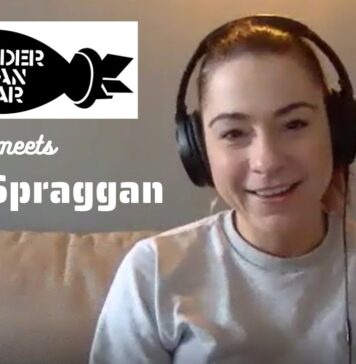 March 5, 2021 0
Paul Clarke talks to Lucy Spraggan about her intensely personal new album, Choices, which is likely to...
Read more