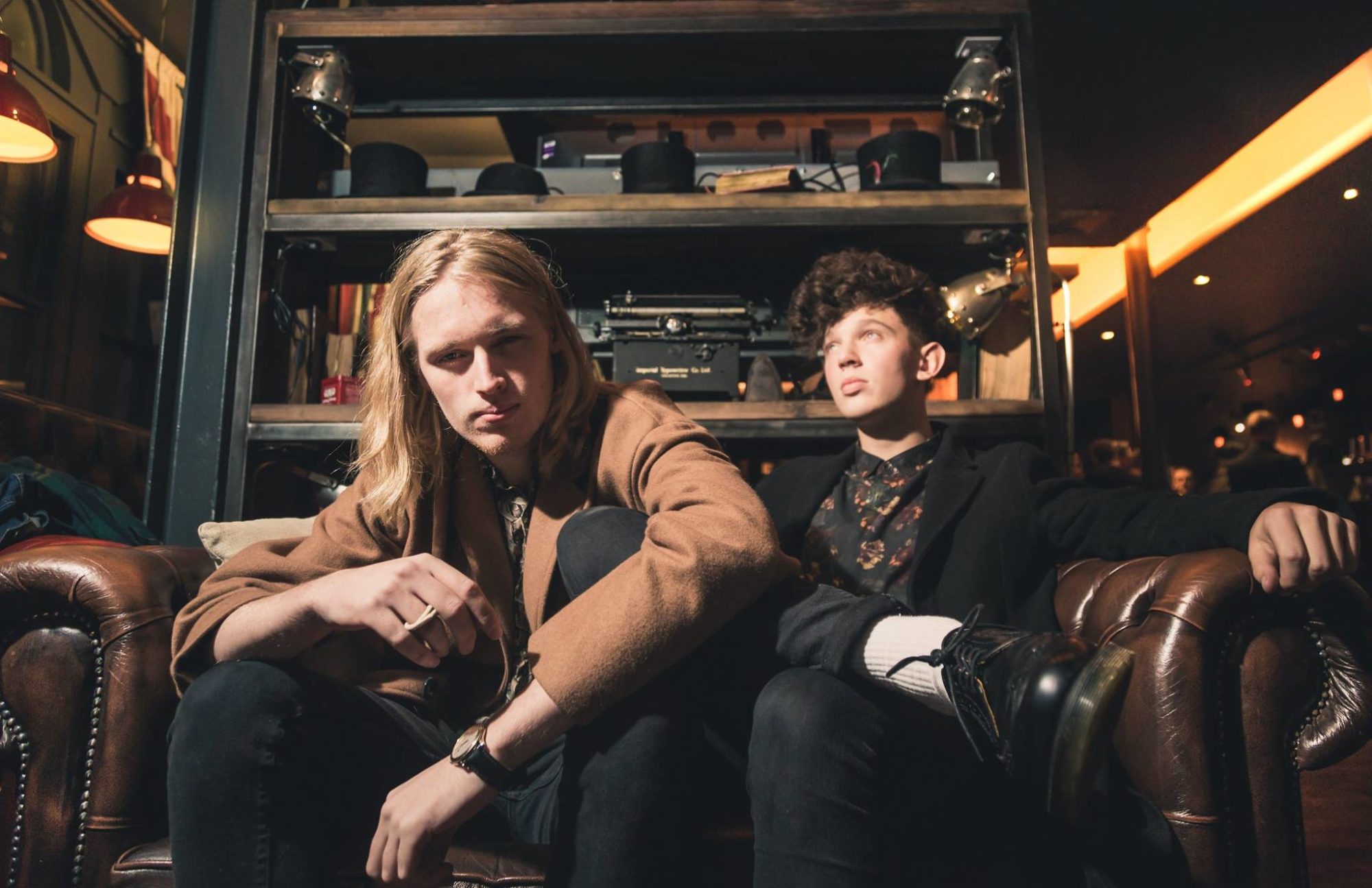 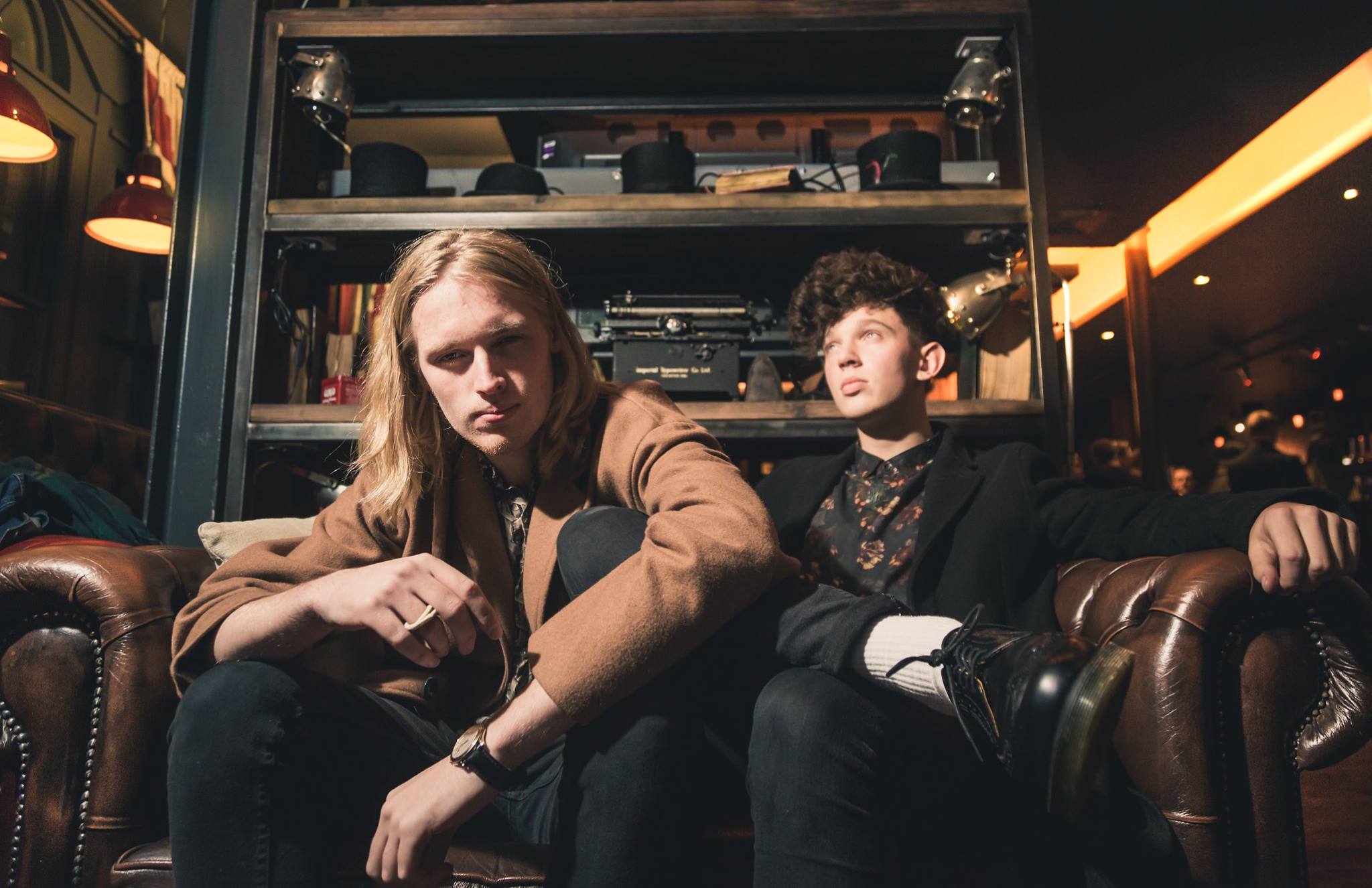 Larkins is a young up and coming indie rock band from Glossop. Rooted in the Manchester music scene, they are more commercially oriented than some of their contemporaries, preferring infectious melodies and image to win over their audience.

Louder Than War’s Nigel Carr catches up with the band on the afternoon of their support slot with The Slow Readers Club at The O2 Ritz in Manchester.  Josh Noble, (vocals & rhythm guitar), and Dom Want, (Lead guitar), are sitting at the back of  The Chop House on one corner of Albert Square in Manchester. On a high after announcing a headlining gig on February 25th at the city’s Gorilla venue they are keen to talk about what makes the band tick and Josh’s extraordinary obsession!

The band attended the recent New York Tourists gig at Academy 3, Josh towering over the rest of the audience with his side shorn, high top haircut. Each band member has cultivated his own look.

Josh explains: “I think one of the first reviews we got was, ‘great act, great hair’. I’d rather they speak about the band, but as long as people can see who we are then that’s cool with me!”

The band formed officially a little over eighteen months ago but Dom and Josh have been playing together since they were kids: Josh: “Me and Dom started out when we were really young, like we just twelve years old!” Dom:: “Yeh, we’ve been together the longest.”

Josh: “We were playing little charity concerts, things like that, then we got to college and wanted to take it a bit further and managed to create Larkins which is named after Phil Larkin the poet and writer of course. It was from Dom’s English room. We all studied English language at college and it was just a nice name.”

Dom: “There was a poster of him in the room and he’s an odd looking guy to a sixteen year old and we all used to have a laugh about him, but then we read a bit of his poetry and here we are.”

The two explain how their sound has developed since they started out:

Josh: “Our first songs we so metaphorical and poetic as well and that’s how we first started writing, we wanted to be wordsmiths. As we’ve progressed we’ve managed to balance that between what we understand and what the audience understands and to find a balance somewhere in the mid range. We do have a commercial element. When we first started out we were listening to Foals and Two Door Cinema Club, and a lot of people who were in the public eye at the time. We tried to do something similar to that. We’d watch their videos; ‘what did they do?’, ‘what could we do?’”

“We got to that stage especially with the last single Velvet where we’d go, ‘OK that’s what we were influenced by’, but then we started listening to other stuff like Led Zeppelin and Blues stuff and we started to realise that we wanted to be us a bit more. Through Velvet we started to get glimpses of ‘this is what we want to be’.”

“As a young band you are bombarded with all this music. All my dad would play was Led Zeppelin and at the time I didn’t want to listen and told him to put something else on. Now I’m telling him about all new tracks I am listening to and thinking, ‘that’s the way forward’.”

“We took ourselves way too seriously as well. At school we were looking at every single element, every guitar tone, every phrase of the song, the way we were on stage and that’s just the way you are as an early band. Then we started to let things go a bit, let things flow, let our sound be who we want to be, how the guitar screams is, how it sounds. People are seeing a lot more momentum now.”

Dom: “We were brave really to let ourselves be and do something crazy and accept actually that that’s cool.”

Like many bands they prefer to hammer out melodies, bass lines and riffs while rehearsing together. Occasionally one of them will come to rehearsals with a complete contribution:

Josh explains: “We have never said, ‘this is how we write a song’. We have never done it the studio way, first and foremost because that’s really expensive and we can’t afford the time. We basically practice in a church! Matt, (Williams), our drummer, is quite religious and he has always been a member of the church and they have a great set up and sound system, the sound is so huge.”

“Henry (Beach, Bass). is so funky as well, always laying a bass line down and a beat and then it usually means sitting down on pews ,all around and sitting and writing. Sometimes I write a bit of poetry and bring those ones in so the lyrics are already done and it’s about finding music to them. Other songs, we will have a really funky beat or Dom’s written a killer guitar hook and it’s built around that.”

Dom continues: “Someone will bring in an idea and that will change. A melody, a riff or a bass line and we will have an idea of where it goes but then it might just go out of the window as we get in to it.”

Josh: “We often send each other snippets we record on our phones” Dom: “A song can start off as something and we play it live, we’ll watch it back and it can change entirely. Josh: “We can write a song, and feel where all the highs and the lows are and then play it live and go, ‘well that didn’t work’, you know as soon as they, (the audience), turn away you’ve lost them. We are playing a new one tonight, we’ve already tried it twice, so hopefully it’s the winning formula and if not we’ll change it again. I don’t think we’ve got a song in our set that we haven’t changed. You can’t underestimate a producer as well. As soon as you go in to a studio and get another set of ears on them.”

The band have been gigging intensely throughout 2016 which have included a number of outdoor slots. Josh: “Kendall Calling, Ramsbotton, that was great, Blackthorn. We tried to cram as many gigs in but we also wanted to stay out of Manchester and then we came back and sold out Manchester’s Academy. We got 650 through the door! We are working with Mark at Scruff Of The Neck and he’s been great, we love him to bits so that’s how we are supporting Slow Readers Club at The O2 Ritz.”

The band have some high profile support slots in the offing and some well earned time laying new tracks down in the studio:

Josh: “We are playing with John Cooper Clarke and Hugh Cornwell shortly in London then we are heading back into the studio in December. It’s called Sugarhouse in Manchester with the same producer. We are going to try and take it up a notch with some fresh tracks. We are then back out with the head-liner at the Gorilla gig on February 27th.

As well as studying in Manchester the pair have part time jobs to help support the band. Josh has his own view about how original artists are treated in the music industry these days and how difficult it is to get funding:

Josh: “Just look at the top ten at the moment – oh my god – I’m not taking anything away from them, some have great talent but write your own stuff, play in a pub and then see how you do.”

“Blossoms have done it the old way but the industry puts a wall up, a money wall, so for example we were at the Etihad recently which is a multi billion pound company and you don’t make any money at the gig. The players are getting millions and we don’t even get the petrol money. I really enjoyed it but we don’t get paid.”

“Guy Garvey said in an interview recently that you have to give unsigned musicians an incentive to quit their jobs. OK, I have to finish university but there is not enough money out there for me to earn to be able quit a job, to do what I want to do. That’s not that we are not good enough, it’s just that the opportunity isn’t there.”

“You play some bars and they are attracting a lot of people, you’re selling a lot of tickets, the bars are getting a lot of money.” Dom chips in: “… and whatever expenses we get just go back in to the band, but we have never been phased by it, luckily we love doing gigs!”

Josh: “Talent is really undervalued. The bigger gigs we need a roadie with us and a van and that’s £150, so your fee has gone. The roadie gets money first before us, which is the way it should be. When you do something like The Deaf Institute or even Ducie Street and there are fifty plus people there it’s like ‘I’m never stopping doing this!’. Tonight the thought of playing that venue with that band and the audience is payment in itself, it’s just ace, we love being in a band it’s just about pushing in further.”

Josh: I listen to a lot of Wolf Alice for the punk influence, the guitarist, Joff uses effects that people haven’t used before that are Hendrix infused and it’s just crazy what he’s doing at the moment. I also listen to No Hot Ashes,. We try and go to as many unsigned gigs as we can to support them. Hidden Charms, they just blow us away.”

We are all massive Corbyn fans – but we don’t want to get too involved in it. We know what we want to do and we want to keep it to the music. If we did get a lot bigger and went on TV I would want talk about our songs, not talking about us and our political views. I don’t wanna grow as a band politically I want to grow because some one wants to see us because we do something special.”

Josh: “I play Frisbee, Ultimate Frisbee. It’s like American Football without contact but with a Frisbee. You score by landing it in the end zone like rugby. Every gig we take a Frisbee out!

The band also like to help out in their local community. Tameside Arts Limited is a non-for-profit initiative to bring arts to people with learning and physical disabilities The band can often be found helping out with music groups and events at the centre.

Larkins are on Facebook an Twitterand their Soundcloud is Here

May 31, 2020
0
layers of synths and drums have been replaced with washed out piano, while vulnerable soft singing blends with wailing of wind from the window.
Read more

Listen to This! Louder Than War Favourites Blackelvis Return With Second...