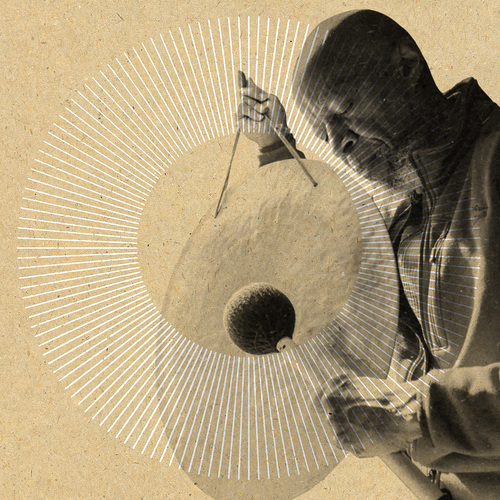 Laraaji: Sung Gong / Bring On The Sun (All Saints Records)

After a resurgence in interest in his back catalogue thanks to an extensive reissue campaign and the first ever retrospective compilation of his work (Laraaji: Celestial Music 1978 – 2011.) ambient and drone mystic Laraaji presents us a double album of brand new material. Created via nine hours of extensive jams, engineered by Davey Jewell (Flaming Lips, Peaking Lights) and edited and mixed down by Carlos Niño the work was formed into two distinct albums. Sung Gong is two long drone pieces whilst Bring On The Sun is more varied and travels through the various points and influences of Laraaji’s work.

Sun Gong explores the microtonal possibilities of a hammered gong processed through various electronic effects. Both sides (Sun Gong No 1 and Sun Gong No 2) are deeply meditative pieces of audio art. As the gong strikes we are settled into a swirling and atmospheric ride through the contours of sound. As the pieces progress the sound becomes ever more enveloping and dense with emotional peaks and dips. Wonderfully serene at times, the pieces travel from loud and all encompassing to almost silent. As various other instrumentation peaks through the void you get a palpable sense of music created live in a room by one singular artist. The distant voices that emerge near the end of Sun Gong No 1 is a moment of heavy emotional punch and deep spirituality. Sun Gong No 2 is the more elemental and natural of the two pieces as it brings in what sounds like running water. It is also the more abrasive and heavy of the two pieces and there are moments where you find it difficult to breath as the intensity rises and deep chants appear.

Bring On The Sun contains eight musical pieces and what is truly astonishing is the wealth and depth of styles and atmospherics that Laraaji can weave throughout his work. There is no fixed geography on Bring On The Sun. It is music that does not contain any borders. Within lies music from the East, West, North and South. A truly global sound that is as rewarding as it is magical.

Bring On The Sun doesn’t eschew the long-form ideal completely as there are songs here (the gloriously soothing opener Introspection, the Indian drone of Ocean Flow Zither, and the Coil-like Laraajazzi) that all break the ten minute mark allowing for deep exploration on the part of the listener.

Bring On The Sun is full of happy surprises whether that be on Harmonica Drone which manages to make an instrument that we are all fully aware of and add a new depth to it by placing it in a an unfamiliar context and Reborn In Virginia which is a narrated tale of Laraaji’s young life but instead of using the Blues as a musical background Laraaji uses Indian instrumentation once again showing us the link between roots music from all over the globe.

Sun Gong / Bring On The Sun is one of those double albums where you agree that the space was necessary. To have further edited it down into a single album would have lost some of the impact with one perfectly serving the other. The albums create a universally positive mind-frame in the listener and can aide in deep introspection. These albums are a vital positive force. They help us understand the global nature of music and how it is all connected. An incredible and  emotional listening experience.