Newcastle’s Lantern On The Lake have just released their second album and reports suggest it was a hard process. Musicians have always struggled in walking the tightrope of economic responsibilities and creative output in this unsympathetic era. There is light at the end of the tunnel though says Philip Allen.

The album is quiet a jolt of electricity considering the usual mellow nature of Lanterns On The Lake‘s music. It feels as if a repressed anger is welling up inside them and exploding with epic effect. The intense melody of Paul Gregory’s guitar on, ‘Elodie’ soar like Explosions In The Sky or Sigur Rós, lifting it into the stratosphere as singer, Hazel Wilde’s delicate blues floods from her like a waterfall.

“Forget the barricades, where four years too late, and all your mother’s words, stress not in numbers.” The impressionistic strokes Lanterns make with their music are mirrored in the lyrics too. Poetic and allusive, they allow the words and melodies to run and bleed into each other. The deep yearning that comes through in her words adds a desperation, rather a situational anguish that actions flower forth from. In ‘Buffalo Days’, Hazel’s raw honesty begins with, “When this started, I was living like an animal, and I didn’t have a hope in hell.” Lanterns On The Lake always manage to swathe the rest of the track with so much rousing violin from Sarah Kemp and Paul’s shimmering guitar (with some great use of a wammy bar), that it feels like a big hug until it releases you at the end in order the repeat those raw words once more, like a tormented cycle fulfilled and completed like Sisyphus.

‘The Ghost That Sleeps In Me’ crackles and creaks into life as the piano and violin (or cello?) form the bare bones until what seems like a symphony of brass and strings adds real weight to the track. The hauntingly fragile vocals speak with insightful regret but always with a twinge of hope attached. This is the kind of meloncholy that affirms life by the very trails that make it so hard at the time of experiencing it. No matter how low their lows are they are always followed by the very British actions of dusting themselves down and trying harder. These are highly charged emotions being expressed here but again with our typical repressive control.

Title track, ‘Until The Colours Run’ is the folk-iest and upbeat song I have heard from them. I real ‘wave your hands in the air whilst you do a jig’ sort of song. It almost feels like your dancing in the rain feeling the drips run down your face, soaking your being but never having felt more alive and vital. This track is so good it gives me shivers. When next song ‘Gold & Green’ begins its lone piano and voice stop you in your tracks. The long decay of the notes matched with the clearly confessional lyrics make this a devastating statement in which love lessons are replayed in the mind with added tormented embellishments. An obvious comparison might be Fiona Apple but it isn’t as tormented as that. It does feel as if it were a letter written in the twilight hours after much retreading.

This album feels like the full article. The first single off the album, ‘Another Tale From Another English Town’ is a brooding tune where the melody surges and lifts into some breathtakingly heady moments and tracks like, ‘You Soon Learn’ and ‘Our Cool Decay’ sound like a band empowered by their idiosyncratic sound and enjoying the pain of creating some of the most spectacular landscapes in which their themes and obsessions are laid bare to the elements. ‘Picture Show’ seems to have the wiping wind of the North West coast making quiet an impression on the Lanterns, so much so their songs are like the ships inside the songs. Tossing to and fro about a body of water so massive, so overwhelming. Braving the storm to discover the calm of the sunrise upon the horizon. Slightly battered and bruised but life affirmed. 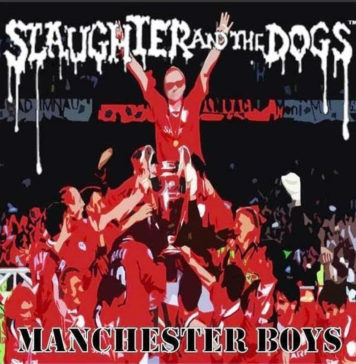 November 26, 2020 0
Over the years they have become punk classic headlining many of the worldwide festivals and the current line up sound as ferocious as ever with their new single Manchester Boys
Read more