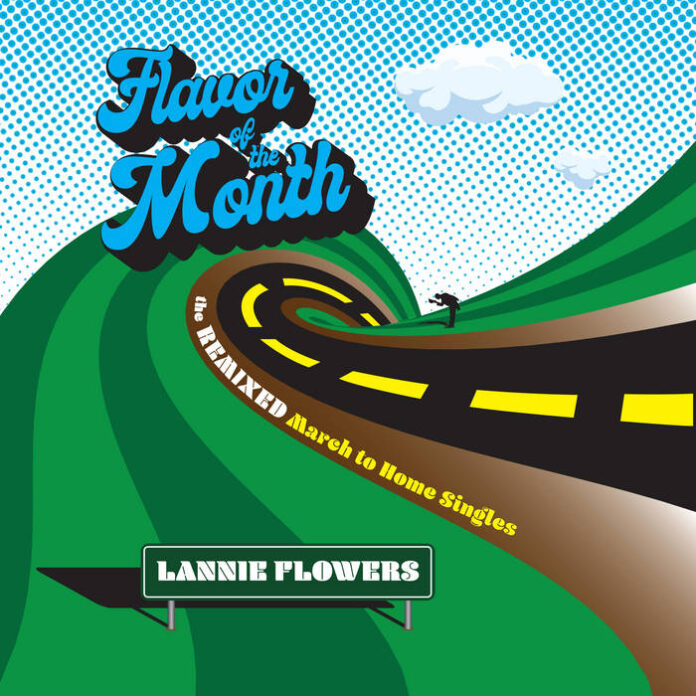 Lannie Flowers – Flavor Of The Month 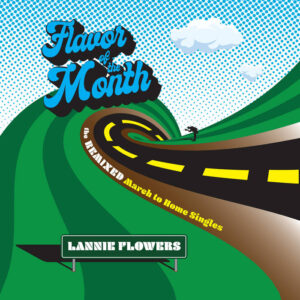 14 track album compiling the songs from Lannie Flowers’ March To Home singles series, which began in 2018. All of these numbers have been freshly remixed for this LP. Ian Canty decides to take the taste test…

In the time leading up to Lannie Flowers releasing the Home album in 2019 (the reissue from 2021 is reviewed here), the erstwhile Pengwin began to put out singles in monthly instalments. These were songs that he felt were not a natural fit for the upcoming LP. Lannie instituted this singles series in March 2018, but while in the midst of the pandemic he decided to remix one of the tunes Let It Go. When that turned out well, it was decided to apply the same treatment to all fourteen tracks, which are compiled here to make up this new LP.

Flavor Of The Month ensues with the slowly emerging sound of the introduction to Don’t Make Me Wait. After this low-key start, we are then launched right into a soaring and memorable rock/pop tune that contains a nicely rough edge applied to the guitar sound. Lost In A Daydream even at first seems to be mapping out toytown psychedelia for the 21st century and at this point it makes sense to mention Scott Trammell and Pat Buchanan, who provide drums and bass among other instrumentation for the album. The solid backbeat that they provide lets the various warps and effects really fly.

In a restrained but soaring power pop mode, Good is enhanced by excellent guitar work set to a sturdy rhythm, which leads us very smartly to the acoustic pure pop gem Summer Blue. This song is one where the protagonist could be seen as either chasing the summer dream or pursuing that special person. This smart piece of writing is luckily allied to a tune right out of the top drawer.

The roots-rock impact of The One made me think a little of Rockpile circa Nick Lowe’s Labour Of Lust album, which certainly is far from a negative thing to be compared to. Let It Go, co-written by Bill Lloyd and featuring him on guitar and vocals, shapes up as a more laidback but thoroughly admirable item. The stripped back instrumentation provides fitting accompaniment to a lyric that offers sound counsel during the aftermath of a doomed love affair. Where Did All The Fun Go? brings things up again, a delightful and deceptively sharp number that hits you with punch and fire in the refrain. The song addresses the ticking clock of time that eventually catches up with everyone. Then comes the title track, warping in with real power to go with an acidic but deft piece of songwriting.

What Did I Know is quietly introduced with handclaps and piano, before the band drop in. This is the kind of a simple and effective pop tune that is actually damn hard to do and the sudden ending caught this listener wanting more. An ode to that unattainable person, Day Glow All Night’s thumping beat is contrasted with light harmony vocals and a garage organ, with Doin’ Fine weighing in somewhat heavier in the verses, but this is set against a loveable chorus.

The guitar strum, strings and pared back instrumentation of the intro of About You is so well accomplished, not a detail seems out of place. There’s a fine taste and balance displayed throughout of Flavor Of The Month, nothing feels rushed, inappropriate or overdone. The lyric is a neat one too, taking a keen look at the empty, unreal world of 21st century “celebrity”. Anything But Love’s slowly descending structure provides the backing for Lannie to weave a story of the kind of pure frustration life can offer you from time to time. Flavor Of The Month comes to an end with My Street (Front Porch Version), where acoustic guitar comes into play again on a rolling tune which is a bit like a Slim Chance for 2022. There is admirable craft shown here, even at this gentler pace.

One of the good things about Flavor Of The Month is that despite originally being constructed as part of a quick-fire single series, the songs hang together well as a long player. This, of course, was despite the fact the original reason for them being released as singles was because they didn’t fit on Home. Having said that, the tunes lose none of their immediacy through being remixed and they flourish just as well individually or as part of the album.

The final observations to note here are this LP has a fine design job and some informative sleeve notes that help give the project further depth. Visually Flavor Of The Month looks great and I feel this adds value to the package as a whole. Musically Lannie Flowers and his cohorts do a spot-on job of delivering a memorable and attractive set of numbers that hit the sweet spot between pop and rock. The songs themselves are marked with the kind of hard-bitten nous only experience can bring and just ring absolutely true. Anyone wanting to hear vital, catchy pop music that isn’t afraid to kick up a storm should form an orderly queue right here.