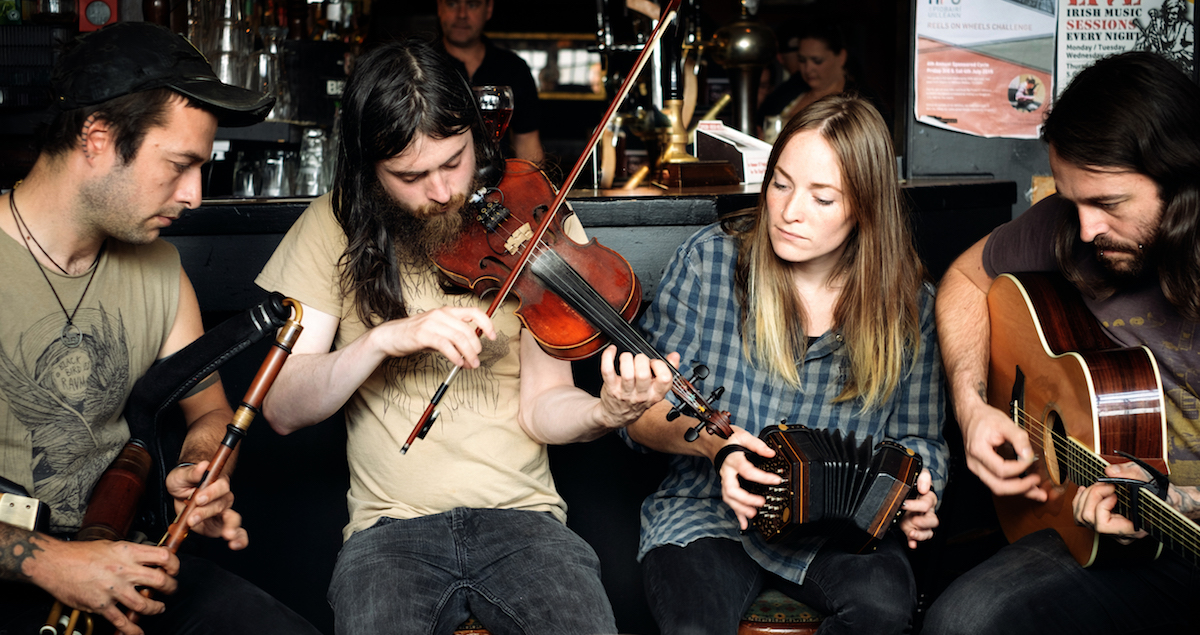 Dubliners Lankum have been described as the best folk band to come out of Ireland for years, as a sell-out Monday night in Bristol will testify…

The Wild Rover has been an Irish folk standard for decades, covered by many bands and honed into a rousing drinking song by The Dubliners, who, together with The Pogues, perfected it into even sharper relief.

In the hands of Lankum though, it’s a completely different story, and they open with their take on it tonight, the first number of their brilliant third album The Livelong Day. Its sixteenth-century origins are coaxed out in a darkly seductive, brooding, drone; Radie Peat’s bewitching, keening, vocals changing the story from a jolly drinking ditty into a sorrowful tale of poverty and regret.

Not that this foursome indulge only in the dark side (“Quite mad that 450 people want to come out and see us on a fuckin’ Monday!” exclaims singer Ian Lynch delightedly in his broad Dublin brogue), and they’ve often brought the best out of raunchy Dublin street songs, especially in their early days as Lynched. But it’s the inventiveness of their reinterpretations of Irish folk’s darker side, delivered with such subtle emotive power and with such musical and vocal dexterity, that captures the mind and moves the soul bringing people out in their droves to see them.

Lynch and Peat’s vocals are integral to their sound, and the interplay between all these multi-instrumentalists is masterful: Lynch on his squeezebox and Uillean pipes here, Peat on her harmonium which undercuts and forms the haunting mood of many of their numbers, the other Lynch, brother Daragh on guitar and vocals and Cormac MacDiarmada on fiddle. All four also combine gorgeously on vocals for harmonic effect.

The anthemic rolling Young People and their take on another old tune Rocky Road To Dublin precedes the beautiful Hunting The Wrens, about women who lived in nest-like dwellings in Victorian County Kildare, seguing into a reel and The Granite Gaze, a powerful dirge about the cycle of oppression and hypocrisy in the traditional religious Irish establishment.

At this point Daragh’s guitar string pings and while he’s replacing it a young woman called Beanie – apparently their driver – is coaxed up on stage to deliver a pretty stunning vocal. She’s not the only guest. After some more spellbindingly impressive moods – Henry My Son from 2014’s Cold Old Fire, a “hornpipe in a fiendish way” with a train-like rhythm sounding like Tom Waits’s backing band playing Irish folk, and the quite mesmeric drone of Katie Cruel off the new album (“If this is too apocalyptic for any of you maybe it’s time to go to the bar or the bathroom” as Ian introduces it) – veteran folk singer Frankie Armstrong joins the band for their version of her 1966 song The Old Man From Over The Sea, her vocals complimented by the ever-excellent Radie Peat’s.

A great night, a great gig, Dublin humour aplenty amongst dark moods and emotions, and a reimagining of Irish traditional music with the kind of hypnotic force of darkly ambient industrial rock. Lankum get even more impressive as they weave their way through folks’ rich tapestry, adding to and shaping it uniquely.