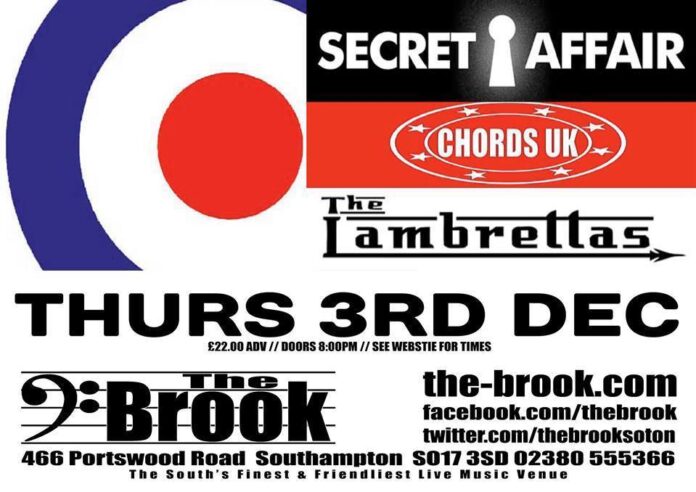 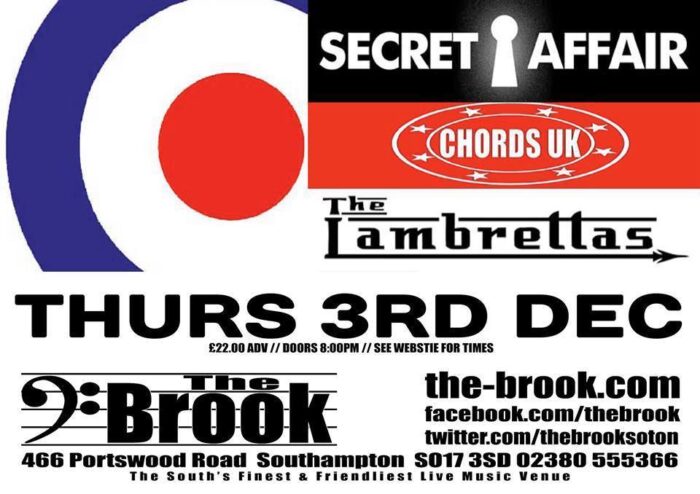 Even when it arrived of the scene at the tail end of 1978, the Mod Revival was derided by most of the Music Press of the time, but as the years go on it’s clear that the object of ridicule by the journos actually contained a lot of music and bands of lasting value. So many years on from the high watermark of the summer of 79, a nicely turned out turn out at the Brook enjoyed an exciting evening from three quality bands that left the assembled chanting “We are the Mods” whilst simultaneously gasping for air after the white-hot performances on show……

First on were the Lambrettas, famous for the hit singles “Poison Ivy” and “Da-a-ance” in 1980. Always pretty under-rated even on the Mod scene itself (probably because of their contract with Elton John’s naff “Rocket” record label), they nevertheless were a quality outfit with a lot of cheeky, well observed songs. Sadly leader Jez Bird passed away a few years back, but with guitarist and singer Doug Sanders now out front, they’re still a tasty live prospect which has been enhanced by the horn section they’ve added since I last saw them. Though opening up meant they were a bit pressed for time and had to forego a few of their standards (“London Calling” and “Go Steady”) it was a showing full of zip and vigour. All they need now is some top notch new songs, which I’m sure they have in them.

The Chords UK also were on the “early doors, hit and run” spot. Now even knowing that Chris Pope had proved his worth as a great songwriter I was a little sceptical of this band because it features only him from the originals – boy was I wrong. They were immense. Though his band aren’t the original Chords by thunder they’re an incendiary rock n roll outfit, constant movement, spot on playing, totally into their art-pop. Dropping a little of the old Reggae standard/Clash b-side “Pressure Drop” into “So Far Away” made the link clear – the Chords UK are like Strummer once said “an explosion on stage”, thoroughly stirring.

Only 8 songs played but what an 8! Starting out with a perfectly realised “Something’s Missing” (what a singles band this lot were – every one an ace) which set the standard for the set being exciting and vital as they day it was recorded. “Can’t Let You Go” shows Pope’s muse is still there and a good trailer for the new LP they are working on and the classic single track keep coming until the irresistible one-two of “British Way Of Life” and “Maybe Tomorrow”. It’s worth noting that the crowd were totally into both the bands that played early on and having a good time which helped produce a great atmosphere and of course as a venue the Brook just got most everything right yet again.

After the Chords UK’s hairs-on-the-back-of-the-neck raising showing it took me a bit of a while to get into Secret Affair, but after a wonderful drums/bass and Hammond organ version of “Peter Gunn” (the keyboard player Andy Fairclough was a revelation) and soon we’re into “Time For Action”, “Let Your Heart Dance” and “My World”, perfect danceable pop territory. They were in great form and kept up the high standard set by the two other bands. Shame we didn’t get “Glory Boys”, but one shouldn’t carp on a night like this. Out into a rainy December night it wasn’t quite a “Mod Mayday” but one couldn’t help but smile. Mods, odds or sods, it was just an exciting old time that was had by all.