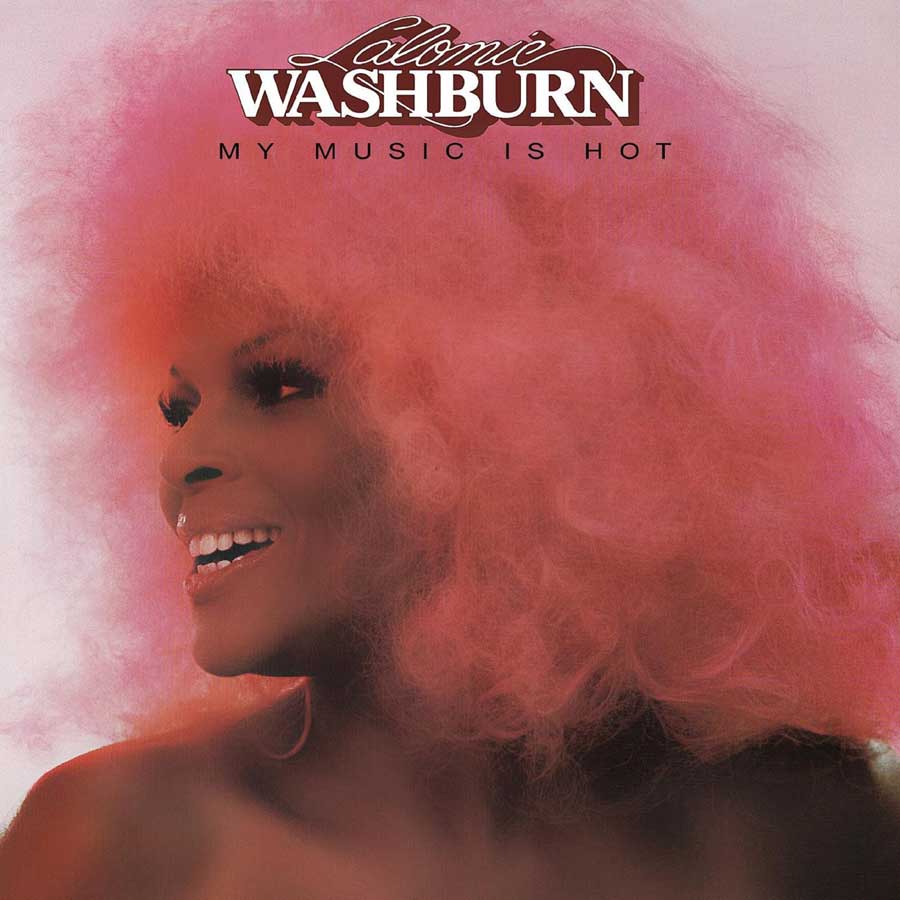 My Music Is Hot 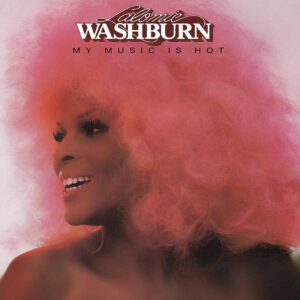 Extended reissue of Funk/Soul singer Washburn’s 1977 debut album, with single edits and different mixes bringing together everything she recorded for the Parachute label….Ian Canty hears a rare talent, sadly underutilised……….

Music is wonderful, as you probably agree if you are reading this. For me the best bit is the unknown – finding something truly stupendous that has eluded you right up until you hit play and a glorious noise besets and enchants you. Up until a couple of weeks ago the works of Lalomie Washburn were a complete mystery to me. I asked for this album to review mainly because the cover photograph made it look like fun. It most certainly was, but also a lot more than that. I’m not much given to be overly emotional, but I have to admit listening to this record along with reading the excellent and detailed sleeve essay, left me with slight moistening under the eyes (it was probably hay fever – well that’s my story). Warning: Lalomie Washburn’s music can touch your heart.

It had been a long road to My Music Is Hot for Washburn, who was in her middle thirties when she cut this disc and made the first steps of her solo career. Born in Tennessee, but growing up in Omaha, Nebraska, she had shone in the local church choir like a lot of future Soul stars. Also, she had started to become an observant songwriter at a young age. Supported by her sister Thelma. who cared for Lalomie’s children whilst she was away working, she began to make a mark on the local music scene. She worked alongside acts of the stature of Ike and Tina Turner and Ernie Fields Junior and developed her own striking image, complete her trademark white afro.

Despite having a quite wonderful voice, clear, powerful and warm, her first real success would come in providing songs for other acts. She became part of the sextet High Voltage and with this band she got to record for the first time, but they soon broke up when two of the band joined fledgling Funk titans Rufus. For Lalomie this was bittersweet as she provided “I’m A Woman” and “Your Smile” for the third Rufus record. The former, in particular, would play a large part in establishing them and in turn, Chaka Khan too. She would continue to write for Rufus and also Chaka’s solo career, whilst in 1975 she hooked up with the remnants of cult Psychedelic outfit H.P. Lovecraft under slightly adjusted Love Craft name.

Though the album Love Craft produced We Love You Whoever You Are failed to make much of a mark, the disparate styles all concerned brought to the table meant for a one of kind record. Lalomie wrote or co-wrote all the songs and the record traversed Funk, Psych, Soul, Art Rock anything else they could squeeze in. She was what in the 70s would be called a “free spirit” and thrived in the environment of experimentation. Though Love Craft folded soon afterwards Parachute Records, an off-shoot of Casablanca, snapped her up as a solo entity. There she was supplied with top sessioners like Joe Sample and guitarist Wah Wah Watson as a backing band. With Washburn’s ex-Love Craft band mate Frank Capek collaborating with her to produce some top-notch songs, all was set for Lalomie to make the album of her life.

Which she did, but sadly it wasn’t the massive hit record that it so clearly deserved to be. It seems the record label didn’t do much in terms of promotion and the middle 70s were of course the time of maximum market saturation. My Music Is Hot couldn’t find its way out of the mountain of vinyl released each week back then. Even so, you wonder why because this LP stands miles out from the crowd. Lalomie’s voice is always the centre, always in control, but not afraid to let the accomplished musicians sparkle. It’s a trip into her world that is wonderfully alive and colourful, dealing with the ups and downs (ooer!) of her life and also a deep knowledge of shortcomings and disappointments implicit too. She was sensual and romantic, but tough and realistic too – you were always getting a heavenly-sounding truth.

My Music Is Hot is the perfect 70s dance record, witty, cool and as sexy as hell, but much more than that. Lalomie lays bare her life and personality, but it’s far from maudlin moaning, being full to the brim with pure elation. It feels with this music she always gets through with a big smile on her face and the bad times are met with a shrug before moving on. She was unstoppable! The seven tracks which make up the album all give the listener different vistas to explore and are indelibly marked with Lalomie’s individual viewpoint. No ballads here, but no lack of variety either and the playing and arrangements are consistently superb.

On our way in we are greeted by some nice fuzz-enhanced Funky guitar, bounced off a relaxed and cool rhythm, on the ecstatic Give Me Love With The Music. The words spell out Lalomie’s philosophy in one hit “I’m here to share the feeling of a joy I hold deep inside”. This is elegant Soul/Funk perfection. The following Double Funkin’ and Freaky Stranegness both deal with sex in a straightforward way and coming from a female viewpoint, work as an antidote to Funk’s sometimes overly macho stance. Lalomie announces that she’s a “lazy lady lover and I’m waiting undercover” in the former and the smooth Soul/Jazz horns give way to the Gospel-like mantra “change my mind” and also “never bother about attachment, I’ll be gone in the morning” subverting the 70s Jack The Lad myth for her own ends.

Shade of Blue is, in contrast, nicely understated with a lovely flute part. For me it is obvious that Lalomie was sending up the Mercury Records boss who asked her to write a song praising men’s accomplishments on Man Power (Can You Do It), exhorting the listener to “make this song a hit” and adding in a hilarious spoken pseudo-religious section. Fast and very danceable, but witty too. The title track is another irresistible winner, a bit like an American female take on Ian Dury’s Wake Up And Make Love With Me. On What’s Love, Lalomie and her musicians pre-empt the sound of the Source’s Candi Staton remix of You Got The Love, which brings the album to a beguiling close. Here we find her at her most vulnerable, still searching and believing that love will see her through, so touching and heartfelt.

Though there are no really slow songs on the album, as one of the bonuses there is the achingly beautiful cover of the Scott Davis number Two Sides (in both mono and stereo forms). We also get extended and edited 7″ versions of the album tracks, the most arresting of which is probably the 12 inch version of Man Power.

Though My Music Is Hot wasn’t a commercial success Lalomie picked up a following in Germany, releasing some good singles including 1991’s Try Me Love. Finally a follow-up album arrived, almost twenty years on in 1996. She even returned to tour her old Omaha stomping ground, but sadly she passed away on 18th September 2004. Though she is gone, she lives on through her vibrant music. This album is an ace from start to finish, likely to melt the heart of even a hardened cynic. A record that is the window into the life of a unique talent, that shines all the brighter on successive plays. Listening to this made me feel like dancing and a little sad, but happy that even after Lalomie is gone, she sounds so alive and so brilliant. Enhance your life by hearing this.