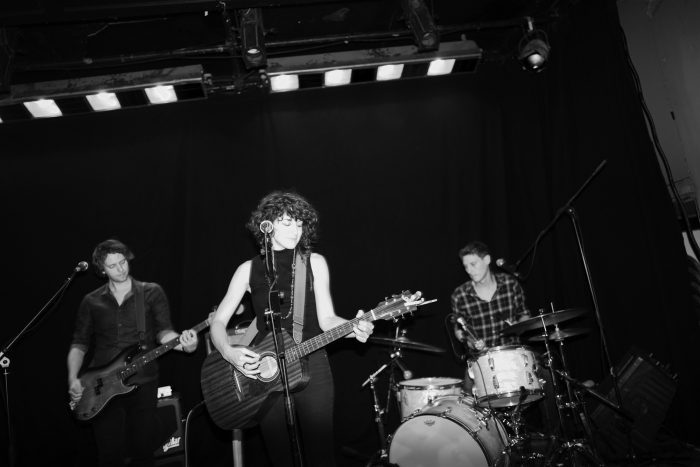 Tom Clayton caught up with Lail Arad ahead of her show at Chats Palace to discuss new album The Onion, jokes, books and Leonard Cohen. A review of the show follows below.

LTW: So how has your experience of touring these songs [from The Onion] been so far?

LA: Well, this is the first night of the tour with a full band, but obviously I’ve been playing solo a lot with these songs. This is actually the first night we’ve all played together on stage!
You’ve played all over Europe already, right?

The Onion has also been released as a book – it seems a lot of artists are moving into cross-format releases these days, what was your particular motivation there?

The only thing I knew about the album was that I didn’t want to release it as a CD – I don’t own any, I just don’t like them. But you want to have something, not just a digital file – I was really happy that we got to do a vinyl release. The book just made sense; the songs are so much about the words. I was a little hesitant when the idea first came up, I didn’t know if they were worthy of being printed – you know, it’s not poetry, and often printed lyrics can look a little strange. But when I started working on it, I really enjoyed adding the prelude and the coda. We also put in some lovely photos and a bookmark with a download code, so you can experience the whole thing.

Your lyrics are often quite direct and confessional; have you ever written a lyric and then removed it because it was too much?

I can’t think of a specific example, but it is tricky to write like this – obviously it’s not autobiography, but inevitably you write about people who you worry might recognise themselves. You change things around a lot but you do have to be a little bit careful…

You almost wish for a similar disclaimer like you find at the front of novels: All of the characters that appear in this work…

…Are fictional. Exactly! I get a lot of people asking ‘So who’s that in this song’ or whatever, but there isn’t always someone, sometimes it just comes together from different ideas. I figure most of the sad songs are written post break-up, so it’s pretty unlikely that person will hear it anyway!

There’s also quite a lot of humour in your lyrics – that seems to be something a lot of artists shy away from if they want to be ‘taken seriously’, with a few notable exceptions – I’m thinking along the lines of people like Loudon Wainwright and The Magnetic Fields – is that something that comes naturally to you?

It’s definitely not a conscious decision, you know, ‘let’s throw a joke in here’… I grew up on people like Loudon, The Kinks – even Leonard Cohen, he has a lot of humour in his work. I would like to be taken seriously as an artist, but I would hate to ever take myself too seriously. But humour is such an important part of life, especially when you’re dealing with difficult things. It’s an important survival mechanism, you have to take things lightly I think, and I think that’s reflected in the writing.

Some of your songs – and I’m thinking really about ‘When We Grow Up’ – talk about indecision and uncertainty, especially as a young person. But you seem very sure of yourself as an artist. Have there been points when you’ve felt that uncertainty?

I think even if you’re sure of what you want to do, there can be a lot of uncertainty about how you go about doing it, whether it’s right to keep at it… I think you have to be completely sure about what you’re doing, because the rest is so hard. The conviction has to come first.

You previously described yourself as a bit of a perfectionist – how far does that extend to the rest of your life?

I don’t think I’m too much of a perfectionist, really. I think a better way to describe it would be a perfectionist seeking imperfection; I don’t think the album sounds perfect, but I didn’t want it to be. I hope it still contains some looseness – I didn’t want any virtuoso playing on it. Obviously there was a lot of thought behind it, it’s not accidental, but it was definitely my intention to keep things rough around the edges.
Obviously a lot of your time is going to be taken up with touring this record, but have you got new material on the go as well?

I do have one or two things on the go – I can’t wait to get some proper time to work on new songs. Hopefully I can play one or two tonight, we’ll see… 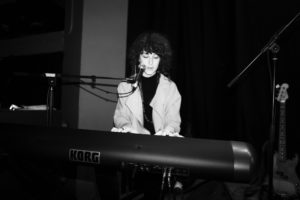 Lail takes to the stage and after a spoken word intro launches into a note-perfect rendition of The Onion’s opener ‘Milo’. We’re then treated to the next couple of tracks as they appear on the record, including a standout version of ‘Pickled Love’, perhaps the album’s most tender moment. Then the order gets a bit mixed up with ‘Helicopter’ and ‘Count With Me’ sounding charged in comparison to their recorded counterparts.

A ‘covers section’ includes Vampire Weekend’s ‘Oxford Comma’, but it’s her version of Bob Dylan’s ‘You’re A Big Girl Now’ which steals the show: a soaring vocal performance backed by just a piano, it silences a bustling Chats Palace, in a good way. Even Lail herself seems stunned by its effect.

Lead singles ‘When We Grow Up’ and ‘Lay Down’ follow quickly afterwards, and after a rapturous reception she sidles back on stage for a solo taste of new work, which even in its unpolished and unwritten form seems to suggest further gold. A triumph, then: it wasn’t always perfect, but hey, that’s not what she’s aiming for anyway. Honesty, grace and humour all abound tonight; perfection can wait.