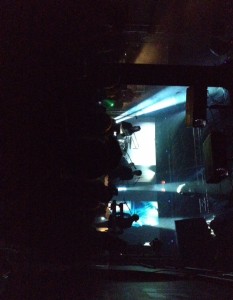 Most of us probably first heard Slovenian industrial band Laibach around 30 years when they were played by John Peel on the tranny. Now signed to Mute they were recently over in this country touring and Louder Than War were lucky enough to be at their Brighton show. Simon  Kvalheim takes up the story.

After many years of waiting, the opportunity to catch Laibach could not be passed up and I made my way through a gale force wind to Concorde 2 on Brighton sea front. The band are doing a short tour of the UK to promote new album, Spectre. I was not to be disappointed.

Laibach have been on top of their game for many years now, never standing still, every new release being different to the last, but still pushing the boundaries. They have influenced many other bands, including Rammstein and without whom the German outfit would not of developed into the band they have become.

So it is really disappointing that the venue is less than half full tonight considering the reputation Laibach carry. It seems a sad world when the likes of Charlie XCX can sell out Concorde 2 in advance  and Laibach struggle to get a decent crowd.

But those who stayed away missed a fantastic gig. The five piece outfit play with a film on permanent rotation behind them featuring a number of black and white information films etc. Led by vocalist, Milan Fras in his trademark Russian army hat, the band worked their way through a great set mainly drawn from the new album.

Kicking off the set with Spectre track, Eurovision, the band deliver a set of over an hour featuring some great tunes. A Kraftwerk / Can influence to the music is immediatly apparent. Co-vocalist and keyboard player, the energetic Mina Spiler – who reminds me of Elizabeth Fraser with her vocal abilities – was  fantastic throughout and commanded a great stage presence. The set is carried along in fine style by drummer, Janez Gabrich, the workhorse behind Laibach’s show.

Highlights of the first part of the set are The Whistleblowers and Resistance Is Futile before the band took a ten minute sabbatical. An intermezzo as they named it, a clock on the screen behind the stage counting down the minutes that they are away.

The second part of the set is storming, featuring Each Man Kills The Thing He Loves and the highlight of the evening for me, Blitzkreig, a tune that reminds me of Primal Scream’s epic Exterminator, while in the background scenes from the film Iron Sky featuring Udo Kier play, a film that Laibach supplied the soundtrack for, which add impetus to the tune.

After two encores and almost two hours on stage, that was it. A superb set from a supreme band. And this, apparently, wasn’t a full Laibach show due to space constrictions at the venue. Now that must be a truly awesome thing.

Catch this band on the tour if you have a chance. You will not be disappointed.

All words (and picture) by Simon Kvalheim whose Louder Than War archive is here.