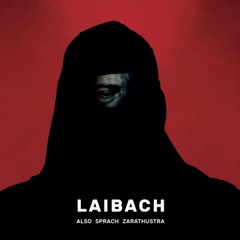 LAIBACH
ALSO SPRACH ZARATHUSTRA
NEW ALBUM RELEASE – 14 JULY 2017
SPRING TOUR BEGINS IN SOUTH KOREA – 1 MAY
“Silence is worse; all truths that are kept silent become poisonous.”
Friedrich Nietzsche, Thus Spoke Zarathustra
LAIBACH announce the release of a brand new album, Also Sprach Zarathustra, the follow up to 2014’s SPECTRE, out on Mute on 14 July 2017.
The music for the album was originally created for a theatrical production of Thus Spoke Zarathustra (Also Sprach Zarathustra) based on Friedrich Nietzsche’s philosophical novel of the same name which premiered in March 2016. Also Sprach Zarathustra is an update of the music Laibach created for the play, directed by Matjaž Berger for the Anton Podbevšek Theatre (APT) in Novo Mesto, Slovenia.
On 1 May Laibach perform in Jeonju South Korea, making them the first rock band to perform in both North and South Korea. The band’s forthcoming dates also include a performance in Zagreb with the RTV Slovenia Symphonic Orchestra, who feature on the new album, full details below.
Laibach’s infamous North Korean tour (in 2015, on the anniversary of the DPRK’s liberation from Japan) is documented in Liberation Day, a film directed by Morten Traavik and described by MOJO as “a humorous, disturbing, illuminating and sometimes moving immersion into an anomalous communist mirror-world…” Liberation Day is currently screening at film festivals worldwide, for the latest details go to https://www.liberationday.film/
35 years on from their genesis in the then-Yugoslavian industrial town Trbovlje, Laibach are still the most internationally acclaimed band to have come out of the former Communist countries of Eastern and Central Europe. Founded in the death year of the country’s founding father Tito, and rising to fame as Yugoslavia steered towards self-destruction, Laibach can make you think, dance and march to the same music.