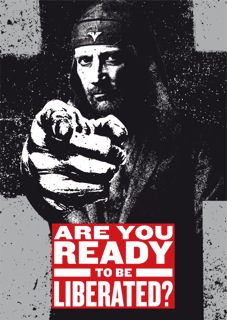 Premiere with exclusive Laibach concert during on Saturday 19 November, the opening weekend of IDFA Melkweg in the Rabozaal

In August 2015, self-defined “engineers of human souls” LAIBACH became the first foreign rock group ever to perform in the secretive state of North Korea. The occasion – or pretext, depending on your point of view – was the 70th anniversary of Liberation Day, marking the end of Japanese colonial rule in 1945.
A Latvian-Norwegian film team was given unprecedented access to follow Laibach and the process of setting up the historic concert inside what is often labelled as the most isolated country in the world.

The resulting documentary musical LIBERATION DAY by directors UĢIS OLTE (LV) and MORTEN TRAAVIK (NO) will celebrate its international premiere at the 2016 International Documentary Film Festival Amsterdam (IDFA) during the opening weekend of IDFA Melkweg: Film + Concert and will be followed by an exclusive Laibach live concert.
The film will be preceded by an introduction from renowned Dutch author Arnon Grunberg, a big Laibach fan himself, and followed by a video comment by Slovenian culture critic and philosopher Slavoj ŽIŽEK.
Tickets are onsale now from https://www.idfa.nl/industry/tags/project.aspx?id=0DB695B5-BFCF-4132-9130-03EE7D49A38D
Watch the Liberation Day trailer here: https://youtu.be/Na2fcjEttzk
More information about the North Korea concerts:
https://www.traavik.info/mass-media/#16
https://www.traavik.info/projects/laibach-the-liberation-day-tour/
About the film:
SHORT SYNOPSIS
Under the loving but firm guidance of an old fan-turned-director and cultural diplomat and to the surprise of a whole world, the ex-Yugoslavian (now Slovenian) cult band Laibach became the first foreign rock group ever to perform in the fortress state of North Korea. Laibach’s Liberation Day Tour coincided with the 70th anniversary of the Korean peninsula’s liberation from Japanese colonisation and subsequent division into two enemy states which confront each other in an uneasy truce to this day.
Confronting strict ideology and cultural differences, the band struggles to get their songs through the needle’s eye of censorship before they can be unleashed on an audience never before exposed to music like this. Meanwhile, propaganda loudspeakers are being set up at the border between the two Koreas, and a countdown to war is announced.
Credits
LIBERATION DAY
Norway/ Latvia, 2016, 100’
Directed by: Uġis Olte and Morten Traavik
Original languages: English, Korean
Subtitles: English
Produced by: Traavik.Info (Norway), VFS Films (Latvia)
In co-production with: Mute (UK), Norsk Fjernsyn (Norway)
Supported by: National Film Centre of Latvia, Culture Capital Foundation, Arts Council Norway
About Laibach
35 years on from their genesis in the then-Yugoslavian industrial town Trbovlje, Laibach are still the most internationally acclaimed band to have come out of the former Communist countries of Eastern and Central Europe. Founded in the death year of the country’s founding father Tito, and rising to fame as Yugoslavia steered towards self-destruction, Laibach have consistently opposed labels of any kind, be they “rock”, “pop”, “techno” or “industrial”. Self-styled engineers of human souls, Laibach can make you think, dance and march to the same music.
www.laibach.org
About Morten Traavik
Morten Traavik is a Norwegian director and artist working across a wide spectrum of artistic genres and international borders. Trained as theatre director in Russia and Sweden, the notion of the world as a stage and identity as role play is never far away in his works, as well as a characteristically blurred distinction between art, activism and social issues. His beauty pageants for landmine survivors, Miss Landmine Angola (2008) and Miss Landmine Cambodia (2009) made headlines and fueled discussions across the world. He is also renowned for a series of controversial collaborations with North Korean artists and cultural authorities, as well as being an authorised cultural affairs liaison for that country.
www.traavik.info
About Uġis Olte
Uġis Olte is a Latvian director and editor who enjoys staying playful when dealing with serious subjects. Equipped with senses of a musician and a belief that dreams, myths and fairy-tales can be useful tools for telling any contemporary story, he has created numerous original TV formats, music videos, ads and also 3 short fiction films – The Red Spot, KK2678 and King Of The Wild Things. His efforts in documentary genre have resulted in two films – Stuck in Stikine (2007) and Double Aliens (2015), premiered at last year’s IDFA mid-length competition.
www.mute.com