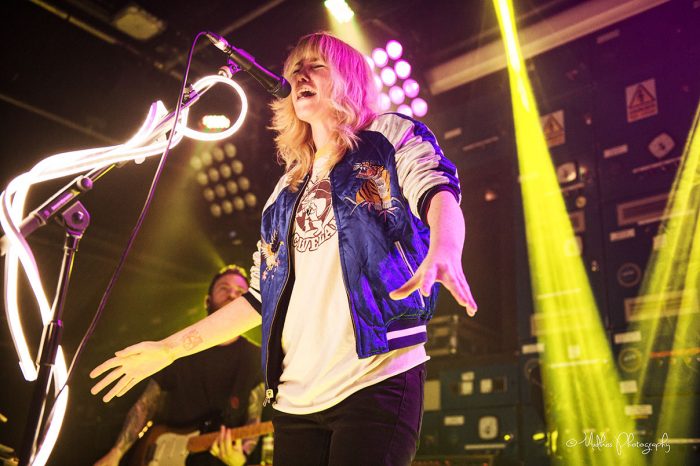 After two years of silence, giving booze the boot and getting married, singer/ songwriter Pip Brown, the artist know as Ladyhawke, is back on the music scene. Her new album “Wild Things” has just been released and Vanessa Lourenco (writer) and Melanie Smith (photographer) went to check out the new songs at a sold out Manchester show. 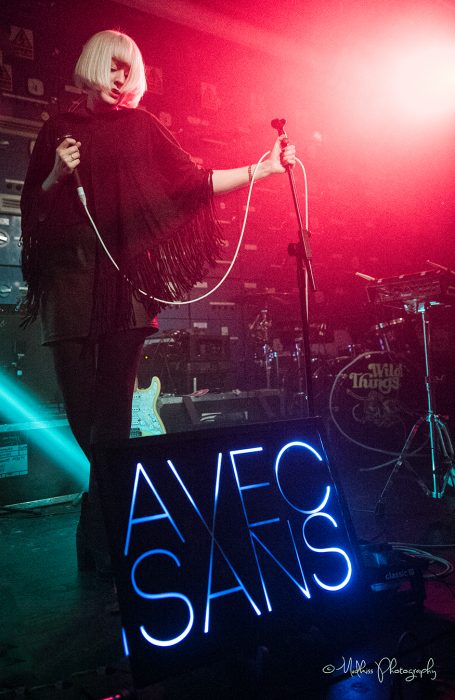 First up were two piece Avec Sans who are Alice Fox and Jack St James the supporting band for Ladyhawke’s UK tour. Their electro innovative sounds are emulated by the visual spectacle of Jack tapping colours onto the launchpad. They’ve been performing as a duo since their 2013 hit cover of ‘Perth’ by Bon Iver, previously under the name of Avec Sound. Their show has an energetic punch and you can see they have a few signatures on stage – the white mic lead, the raising of the arm whilst the song builds, the colour spectacle creating the atmosphere for an 80s vibe. Alice has a great stage presence, Blondie meets Sia with the vocal vibe of Ellie Goulding. Their performance is both visually and audibly pleasing, they are definitely current, in the moment and worth watching live for their performance alone. Their new album Heartbreak Hi has just been released on itunes and riding high in the electronic charts.

As soon the supporting act leave the stage, the venue starts tightening-up with overexcited fans who can’t wait to see Pip perform. There’s a mixed crowd with uni students, big bearded hipsters and lots of LGBT supporters. Brown recently married her long-term girlfriend Madeleine Sami and hasn’t touched a drink for two years now and this has set the tone of her latest album, ‘synthy’, poppy and happy, something quite new for the artist.

She gets up on stage with a huge boost from the audience, with big Dr Martens boots, skinny black jeans and a shimmery bomber jacket, loaded with attitude, you wouldn’t say she suffers from Asperger’s, (something she doesn’t really talk about) only refers to as being one of the reasons why she has extreme stage fright. Nevertheless, there she is, ready to give the crowd what they came for, a piece of her undeniable talent. 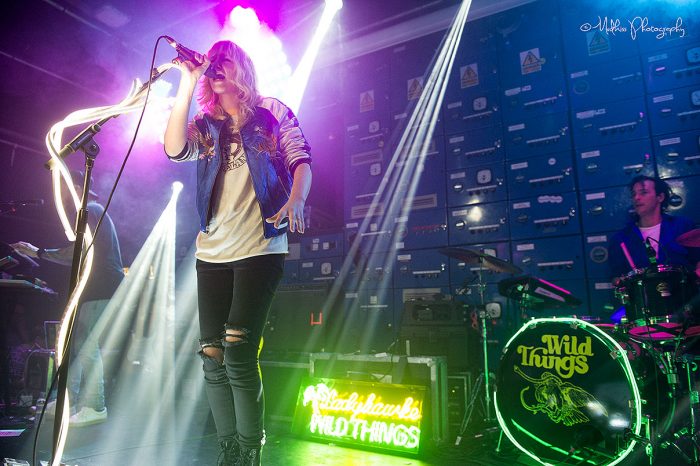 Her voice is on point, the band are spot-on and the stage is smartly lit with neon lights placed around the mic stand and the instruments. She carries a band of three – drummer, bass and keyboard and they surround her in a supportive way that transpires their professional intimacy which enables them to create magic.

With a much bigger set list than the usual (6 or 7 songs) this one contains the whole album plus a few oldies but goodies. The whole house is singing along and she starts to ease up more and more to the warming almost karaoke like group watching her.

Songs like “Dusk Till Dawn”, “Back of the Van” and “Blue Eyes” make the venue vibrate with positive energy and there seems to be a smile on everybody’s face, especially Ladyhawke’s.

Brown explains that the new album was “both fun and therapeutic, as it gave me a sense of purpose, something to wake-up to in the morning”, she has also become a more confident songwriter, after going through a darker period in which she scrapped everything she wrote as they were too heavy. “Wild Things” is about happiness, a new found place to Pip where she feels comfortable and loved. it’s a powerful vibrant expression of life that mirrors every aspect of the new Pip that has risen from a sombre time.

The New Zealander will be touring the UK, USA and Australia all year round to promote her third album. Make sure to catch her if she swings your way, and even if she doesn’t, you should definitely make an effort to swing towards hers.

“Wild Things” was released on June 3rd 2016 and you can check it out here.
She can be liked on Facebook: and she Tweets here: