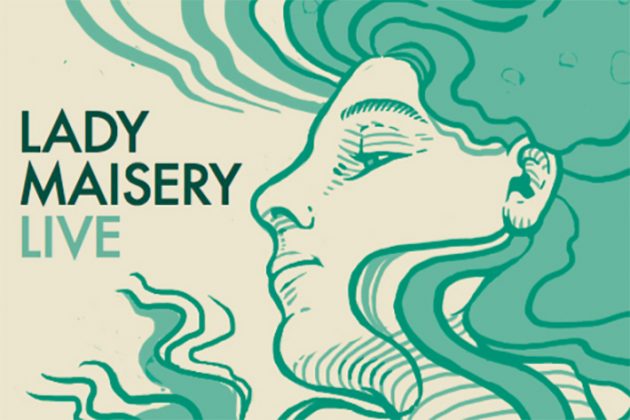 Beatifically  harmonic folk trio recorded live – we get a taste of their 2019 release, although lucky gig goers may have picked up a pre-release copy.

Just thinking about live albums. Not trying to be controversial or glib but what’s the point? While there are some legendary live albums  in the rock field that capture a band at the peak of its powers, casting their studio work into oblivion,  folk music seems to rarely deal in live albums. The audience interaction by comparison is minimal (apart from the occasional singalong opportunities) although the natural synergy between the musicians performing in a live setting remains the  key factor.

As Hannah James, Hazel Askew and Rowan Rheingans work flawlessly through their repertoire, there’s no sign of an audience presence in Reeth Memorial Hall or Staveley Village Hall – no end of song applause or interaction is evident even bearing in mind the respectful silence that often characterises a folk audience  – yet Live is as absorbing a recording of the trio in performance. Possibly one which is just as mesmerising as anything served up by the excitement of  Deep Purple’s Live In Japan or Live And Dangerous. Like those classic live rock albums, songs get reworked and refashioned in the live environment, taking on a new life with the studio recordings just he template from which to build a performance.

The trademark lush and rich harmonies and variety and virtuosity of their musical abilities ebb and flow over an hour where 13 It contains 13 tracks of live versions of material from their three studio albums Cycle, Mayday and Weave & Spin. Pre-release copies have been available at gigs in Autumn/Winter 2018 before an official release in 2019. A strong emphasis on those three voices working in close unison is punctuated with some subtle percussive  footwork and Hazel Askew’s harp adding a delicacy to the likes of The Selkie.  There’s a healthy mix of their own material and traditional songs, where, right at the centre of the set,  London Lights swings and sways in fine folk tradition

Rowan  Rheingans’ songwriting (most recently shining through on the Rheingans Sisters’ Bright Field) is highlighted with Sing For The Morning and a lovely Soil & Soul from the songs Of Separation project. The set highlight of Todd Rundgren’s Honest Work might seem an unusual choice but the trio add a golden coating to one from Todd’s A Capella album.  And when you’re looking for the end of show Smoke On The Water moment where you can rock out, Hannah James’ Sheila’s 70is the sort of outlet that has even the most hardened folk stalwarts indulging in some fine English chair dancing and knee tapping. Must be good – there’s finally some applause!