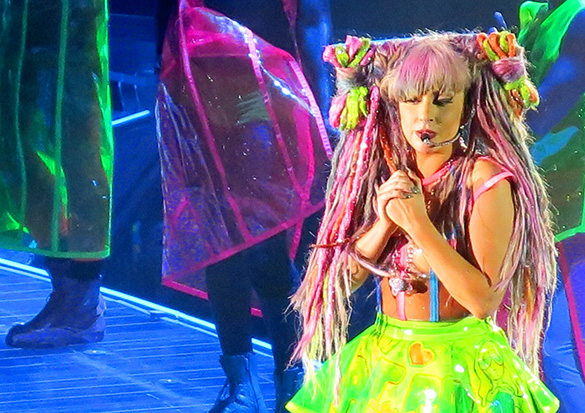 Our lead black metal reporter, Andy Santiago, took in Lady Gaga’s show in Manchester last night. Check out his words about the show and some stunning photos from Melanie Smith, below.

As a fan of quality pop music as well as the filthiest of Black Metal, when I was invited to attend the Manchester instalment of Lady Gaga’s seemingly never ending world tour, I was more than up for it and gratefully accepted. If you’re gonna go outside of your normal gig comfort zone of ‘the metalz’ it might as well be for arguably one of the most famous female pop stars on the planet right?

So, laughing in the face of almost certain death (well, the tail end of a hurricane apparently) and with little regard for our own safety, across the storm-battered Pennines we did journey to make merry in the court of Ms. Gaga.

After the usual rigmarole of finding some form of car parking we stepped out onto the rain-lashed and absolutely bloody freezing streets of Manchester and made our way to the cavernous, corporate hell hole that is the Manchester Arena and stepped inside to what had been transformed into a surreal world just for one night.

Gaga doesn’t fuck about when it comes to production at her shows. She’s like the female Rammstein, providing visual overload in a live environment and it was hard not to be impressed by the maze of ramps, walkways and mini stages that extended far out from the main part of the stage and into the standing area of the arena floor. Most certainly a promising start to the evening.

As we took our seats, the evenings support act was mid set. Now, I may have missed the point here but my idea of a support is not a middle-aged woman with what appeared to be a couple of miniature ironing boards on one of the walkways, twitching violently as banging techno and dubstep thundered around the venue. The last time I saw Gaga we had Lowestoft’s finest cat suit botherers The Darkness and in the US on this current tour, they had the very much talked about Baby Metal as support. Ever get the feeling you’ve been cheated?

I’m not sure if it was the horrific weather conditions outside or the fact the show was on a Tuesday that was putting a slight dampener on the almost feverish sense of anticipation that preceded the last time I was there for a Gaga, but the crowd seemed slightly subdued. This changed almost immediately as the house lights went out and the massive shiny pink curtain that covered the main stage dropped. Mother Monster was among us! 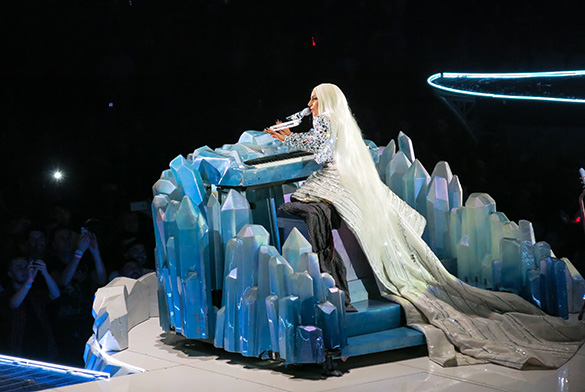 For some unknown reason, I haven’t actually heard her latest album and so the first part of the set was pretty much all new to me. It sounded all good, and if pushed to describe it I would have said it was “very Gaga”.

As before, she had masses of obnoxiously good looking dancers and a full, head to foot in white, 6 piece band. A special mention to the drummer here who was quite magnificent.

Eventually the familiar sounds of ‘Just Dance’ came and a shortened version slid straight into one of the greatest pop songs ever, ‘Poker Face’. This utter classic was also in an abridged format and slid into yet another trimmed-back airing of mega hit ‘Telephone’. Three of her biggest hits chopped back into the duration of just one of them. A confident and brave move to just toss away such well known songs or an act of ego? The jury is still out on that one.

As the stage sprouted inflatable flowers and there was confetti cannons going off all over the place, Gaga returned from one of several costume changes and launched into a stunning ‘Paparazzi’ that was a perfect showcase for her quite simply phenomenal voice. Anyone who questions her vocal prowess is just plain delusional.

Gaga takes her place in the middle of the crowd at her piano and summons her two guitarists and bass player for the almost Kid Rock-esque ‘Yoü and I’ and falls to the floor at the end of the song, one of her heels becoming trapped in her latex leotard. “Don’t you just hate it when that happen?” she asks.

She calls two gay guys onto the stage and one of the lads proposes to his fella. He accepts, the crowd goes wild and Gaga plays a stripped down ‘Born This Way’ with only piano. It works supremely well in this form and the anthemic song takes on a new persona. Once again, her incredible vocal range driving it on. 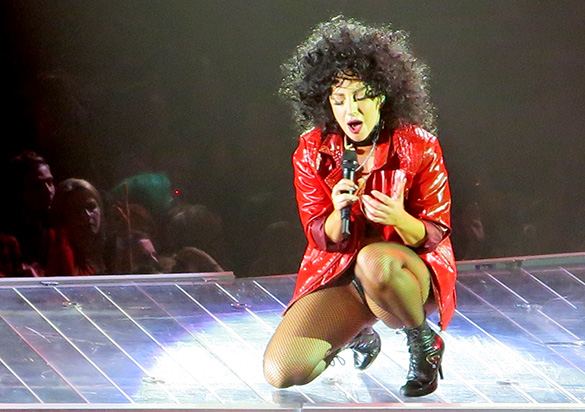 More costume changes, more dancers flailing about and a couple more hits like ‘Judas’ and ‘Alejandro’ follow and then she disappears briefly and returns with an ill-advised, massive Cher-type wig perched on her head and proceeds to tell us she started out as a jazz singer. A cover of ‘Bang Bang (I shot you down)’ is next and the delightfully foul-mouthed Gaga screams something about how she “Still likes to fuck shit up” and sprints to the middle of the stage for yet another costume change before hammering out ‘Bad Romance’. In full, not a shortened version.

The show is rapidly drawing to a conclusion and we’ve had it all. Marriage proposals, fan letters from Kazakhstan thrown onto the stage and read out, constant speeches on self-belief and overwhelming gushes to “All the fans without whom she’d be nothing” and how “We are all the same” and so on. Blah, Blah Blah. Heard it all before last time around and this tsunami of sincerity causes me to scowl and shake my head a little. I’m sure it was all with the utmost of best intentions but I hate all that preachy shit from pop stars. Probably just me then!

Suddenly all is forgiven when she does a song called ‘Swine’ and her dancers are wearing pig masks that spray blood! All we need now is some reckless application of pyro and the job’s a good ‘un! This part of the show clearly triggers something in the well dressed young lad seated in front of me and he springs into action, giving it some serious ‘Vogue’ and busting the sort of dance moves that even Louie Spence would be too shy to consider. Go on son, live the dream!

As the last notes of the set closer ‘Gypsy’ ring out Gaga bids us all farewell and the artRAVE is over. Not quite the euphoric rush the ‘Born this Way Ball’ was but she’s still the greatest living female pop star on the planet and puts on a hell of a show.

As we are climbing the almost sheer wall towards the exit, I look over my shoulder to see one of her vast road crew walking around the ramps and catwalks with a miniature leaf blower, removing all traces of confetti and generally having a good tidy up. Now THAT people, is Rock ‘n’ Roll personified. 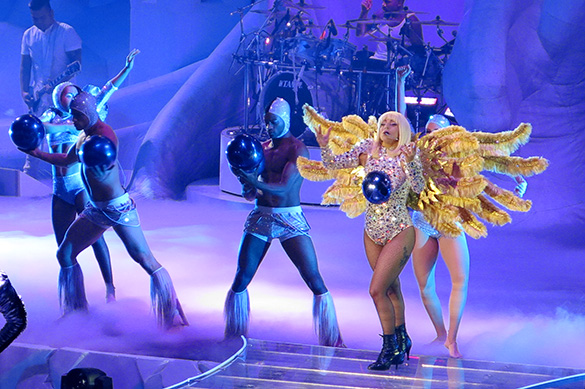 All words by Andy Santiago, all photo’s copyright Melanie Smith. Check out more of Andy’s writing at his author’s archive and more photo’s by Melanie can be found at her website: mudkissphotography.co.uk.