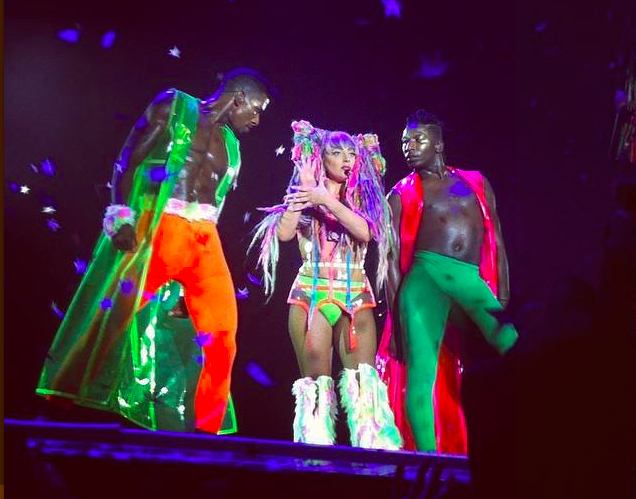 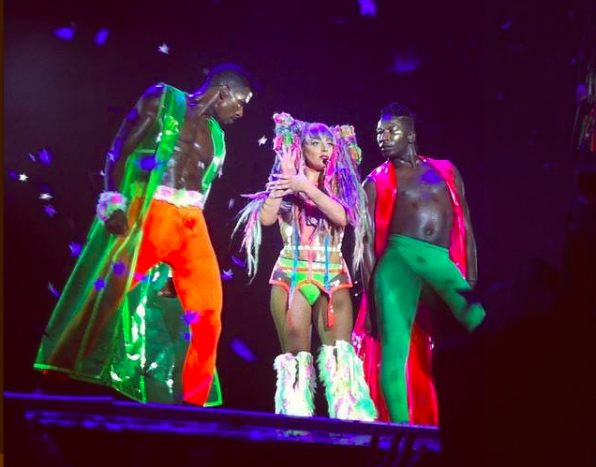 Lady Gaga thundered into Berlin with her artRAVE: The ARTPOP Ball and left an entire arena of spectators in no doubt as to her commitment to music, her appreciation of her fans and her skill as a passionate and accomplished live performer. For Louder Than War, Fat Gay Vegan reviews.

Let’s start with a full disclaimer. I am a Little Monster, as in a rabid devotee of the artist formerly known as Stefani Germanotta. My love for all things Mother Monster has found me in concert venues in Barcelona, Sydney, Brisbane, London and Los Angeles. By the time you read this, I will probably have just arrived home from a trip to Glasgow for a Gaga show.

That said, I know how to be critical of my idol when warranted. I’ve witnessed the wheels coming off the Born This Way Ball world tour across multiple locations and feared the worst. One gig I attended in Barcelona featured Gaga vomiting on stage mid song, while a London stadium version of the extravaganza was riddled with late starts, missing songs and rambling monologues.

As a vegan, I am confronted by her choice to wear and defend wearing animals. I find the gap between her compassion for humans and non-humans problematic and upsetting. If Gaga could extend an ounce of the care to food and clothing choices that she does for caring for her followers, she would be doing a hell of a lot of good for animals.

Rant over. Back to Berlin.

Grasping my loving yet capable-of-critiquing hat firmly in hand, I entered a packed German arena for probably the finest show by the pop star I have witnessed. From the opening, Gaga was front and centre of a somewhat minimalist stage design and the attendees had very little razzle dazzle to distract them from her talent.

Casual fans not in love with latest long player ARTPOP had to wait until song number six before Gaga dipped into her earlier catalogue. The performer, her band and her dancers tore through ARTPOP, G.U.Y., Donatella, Venus and MANiCURE before exploring early megahits Just Dance, Poker Face and Telephone.

Even Gaga detractors hold their hands up to the performer being a gifted musician and vocalist, so it should come as no surprise that some of the highlights of this Berlin pit stop came from the performer stripping the show back to her voice and her fingers on a keyboard. It was a marvellous sight to behold as more than 15,000 concert goers fell into reverential silence to allow Lady Gaga the space and time to belt out emotional tracks such as Dope and Born This Way.

Two moments of the concert deserving special mention were actually unscripted and probably the most talked about in the days following the show.

Gaga stopped proceedings momentarily to read a letter from a front row fan, detailing how the singer’s music and positive messages of self-empowerment helped him through the hardship of losing his mother to cancer. Grown people all around me were openly crying as the pop star performed an impromptu version of Marry The Night directly to the fan. This heart-on-her-sleeve approach to propping up her fans rubs many people up the wrong way, but it is undeniably moving to be surrounded by young people (often outsiders) who feel they have a voice in the shape of Lady Gaga. The singer screamed at her Little Monsters to, “Get out of your own fucking way and run to the stars in freedom!”. It sure beats Katy Perry telling them to feel a bit cheeky for kissing girls or Robin Thicke being a completely vile fuckhead about women.

Surprise number two came in the form of a very Cher-like Gaga in curly black wig and very little else stunning the crowd with a jazz version of the 1966 Sonny Bono penned Bang Bang (My Baby Shot Me Down), a version of which can be found on the Tony Bennett and Lady Gaga duet collection released recently. This was the first time Gaga had performed the song throughout the current tour, so it was special treat for diehard fans and casual listeners alike.

The finale of the Berlin show was a fitting statement from a performer almost suffocating under the weight of pop star comparisons, record company expectations and a run of hit singles most singers only dream about.

Lady Gaga strutted onto a bare stage and performed the ARTPOP track Gypsy, first alone at the piano and then accompanied by her live band. The dancers were nowhere to be seen. The effects were minimal. The audience was left with the clear and distinct voice of Lady Gaga ringing in their ears, imploring them to understand how this shared adventure is just one of many crazy, confused, entertaining and authentic experiences she has in store for them.

As I walked into the Berlin rain as the house lights came on behind me, I felt energised and satisfied in the knowledge that quality pop music is not dead. Lady Gaga is a commanding live performer and an artist with as many thrilling musical possibilities ahead of her as she has outrageous costumes in her past.