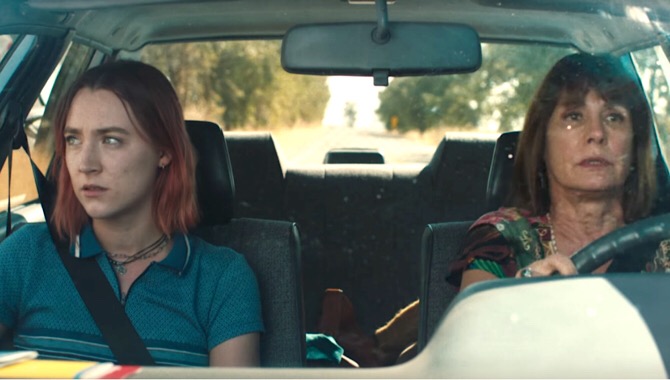 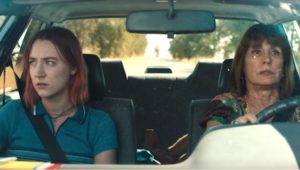 Screening at Home, Manchester and on general release.

Wake up. Argue. Stumble. Fall.
Wake up. Argue. Stumble. Fall.
As a routine. As a habit. As a trap, a prison, a fortress from which escape is not even something you can begin to conceive. As a protracted physical reality when Lady Bird, infuriated by her mother’s very existence, makes an almighty mark on the argument by preferring to exit the moving car from the passenger seat and onto the asphalt. During this opening scene, Lady Bird has no wings or at least they’re clamped shut, unused, virginal and gossamer in their carapace.

Wake up. Argue. Stumble. Fall.
Wake up. Argue. Stumble. Fall.
The definitive adolescent curse. Induction into the adult world will break you beyond recognition. Gregor Samsa reborn in Sacramento circa early to mid 80’s. It’s 2002 (a palindrome too), and Christine (Saoirse Ronan)has transformed into a gigantic insect. As with Kafka’s famous story, we arrive mid-narrative, the transformation, at least nominally has already taken place. The viewer is presented with a case study of how the rest of Lady Bird reconfigures, consigns childhood to the past and orients herself in this new terrain, internally and externally.

The poet Simon Armitage, reflecting on the inhabitants of the Pennine Way after walking it and partaking of their hospitality, claimed that strikingly, many were refugees from the rat race, often wounded by their former lives. With typical sensitivity he contemplated the deforming nature of work, often underestimated as a transformative force upon one’s character. I see it in those wind ripped trees in the Pennines and the Peaks, both tree-less deserts for the most part, where such isolated figures cast long, dark shadows.

As deforming and transformative as work may be, physically, psychologically and emotionally… nothing rearranges the essence of every cell like adolescence. Hijacked by desires and every morning a morning with waking hangover regret… identity shifts by the second, from unshakable certainty of maddening impulse to the heat of shame and disbelief that sets your face on fire and ostracises you forever.