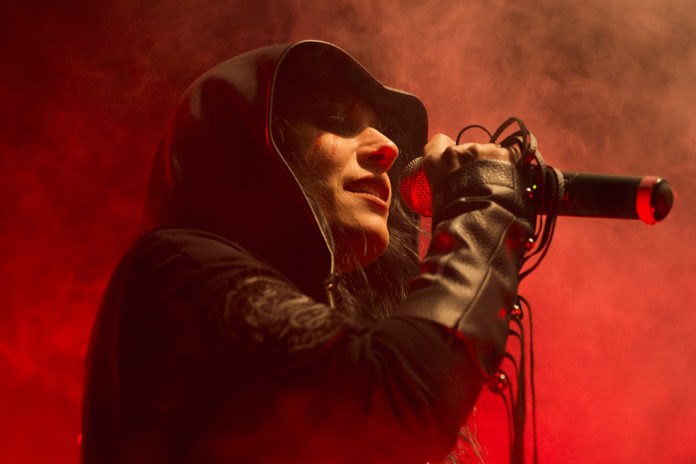 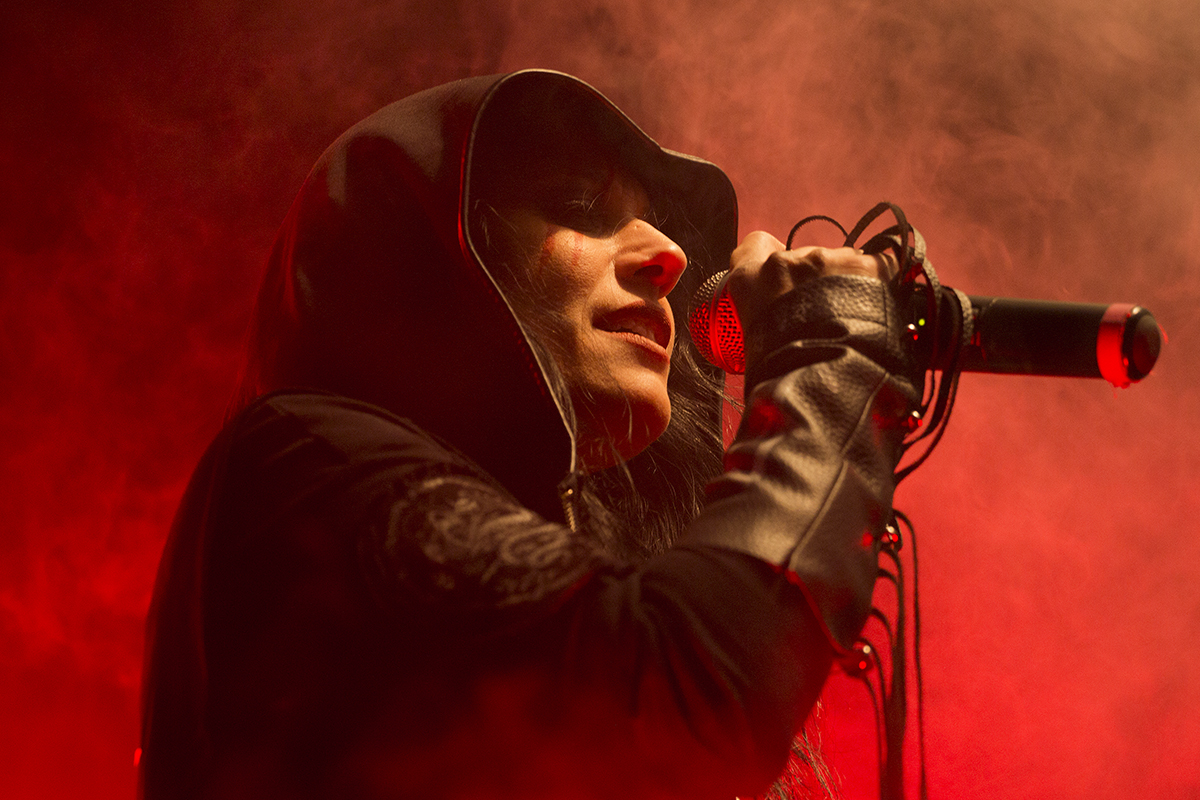 Elliot Simpson reviews Lacuna Coil at SWX for Louder Than War, with photography by Michael Brumby.

Lacuna Coil are grizzled veterans of the metal scene, since their formation 25 years ago, the Italian band have been a consistent force, tweaking their sound here and there just enough to keep things fresh. Maintaining a huge fanbase for that long is no easy task, but their career-spanning show at SWX in Bristol goes a long way to explaining why they’re still so beloved.

The show kicks off early with a set from Moldovan nu-metal band Infected Rain. Frontwoman Elena Kataraga commands the audience with ease – and the occasional scream – frequently ordering them to sing along and even calling for a circle pit towards the end of the set. The band’s sound is fast and explosive, threatening to give the crowd’s more enthusiastic headbangers whiplash, and does well to set the tone for the night.

Eluveitie, the night’s second support, are a lot harder to pin down. The Swiss band fuse a classic metal sound with traditional folk music, with their nine-piece band featuring flutes, a violin and even a hurdy-gurdy. Frontman Chrigel Glanzmann stalks around the stage, dressed bard-like, dishing out death growls and the occasional flute solo.

After the initial surprise of the band’s sound and appearance, there was plenty to enjoy about them. Part of this is because the band refused to take themselves too seriously, indulging in a playful spoken-word Celtic introduction and bringing out a set of bagpipes for the final song. And despite the group’s vast number of members, everyone got a chance to shine. Female vocalist Fabienne Erni was given a chance to sing acapella, drummer Alain Ackermann indulged in a fantastic solo and yes, even hurdy-gurdy player Michalina Malisz was given her time in the spotlight. 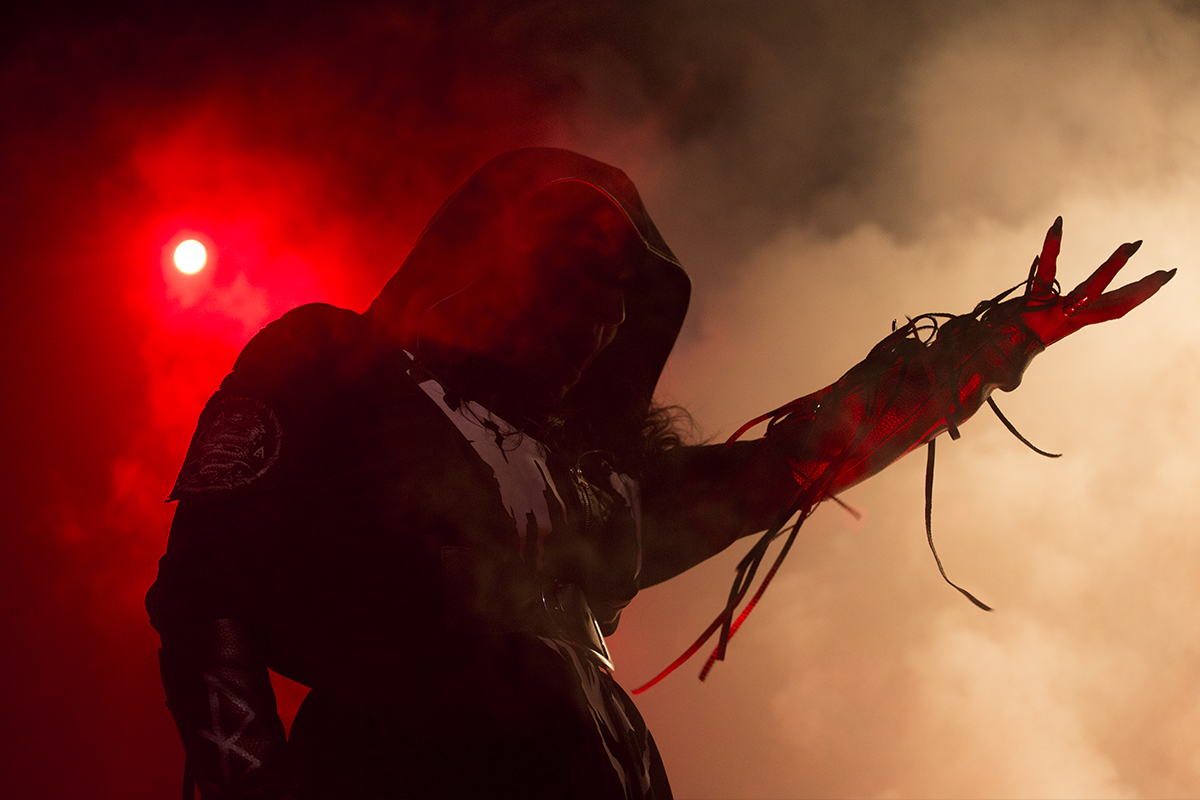 After a brief interlude, it was Lacuna Coil’s turn. Drummer Richard Meiz arrived on stage first to hype up the crowd, demanding their applause to conjure up the rest of the band. Thankfully, they soon appeared and dived straight into ‘Blood, Tears, Dust’, a propulsive whirlwind of crushing drums and dirty guitar tones. Andrea Ferro’s roaring vocals led the charge, with Christina Scabbia’s softer ones acting as a counterbalance on the choruses.

They quickly followed this up with ‘Trip the Darkness’, featuring one of the band’s stickiest vocal hooks. “Are you guys having a good time?” Scabbia calls out to the audience after the song finishes. “Because that’s what we’re here for.” The sea of hands raised in the sign of the horns is more than enough assurance for her that everyone’s enjoying themselves.

There’s a certain theatricality to Lacuna Coil’s live shows that makes them so compelling to watch. The faces of the band’s guitarist Diego Cavalotti and bassist Marco Coti Zelati are decorated with black and white face paint in gothic designs, while Ferro and Scabbia wear vampirish outfits. As neither of them play instruments during the show, they’re able to jump around the stage and beckon to each other and the crowd. It all adds to Lacuna Coil’s larger-than-life personality.

Expectedly, the band pull out a number of songs from their most recent album Black Anima. Arguably their heaviest in over a decade, cuts like ‘Sword of Anger’ and ‘Layers of Time’ hit the audience with a cacophony of crushing sounds, acting as fuel for the mosh pit at the front. Other songs, like the catchy ‘Reckless’, show that Lacuna Coil still haven’t lost their knack for writing an earworm of a vocal hook. 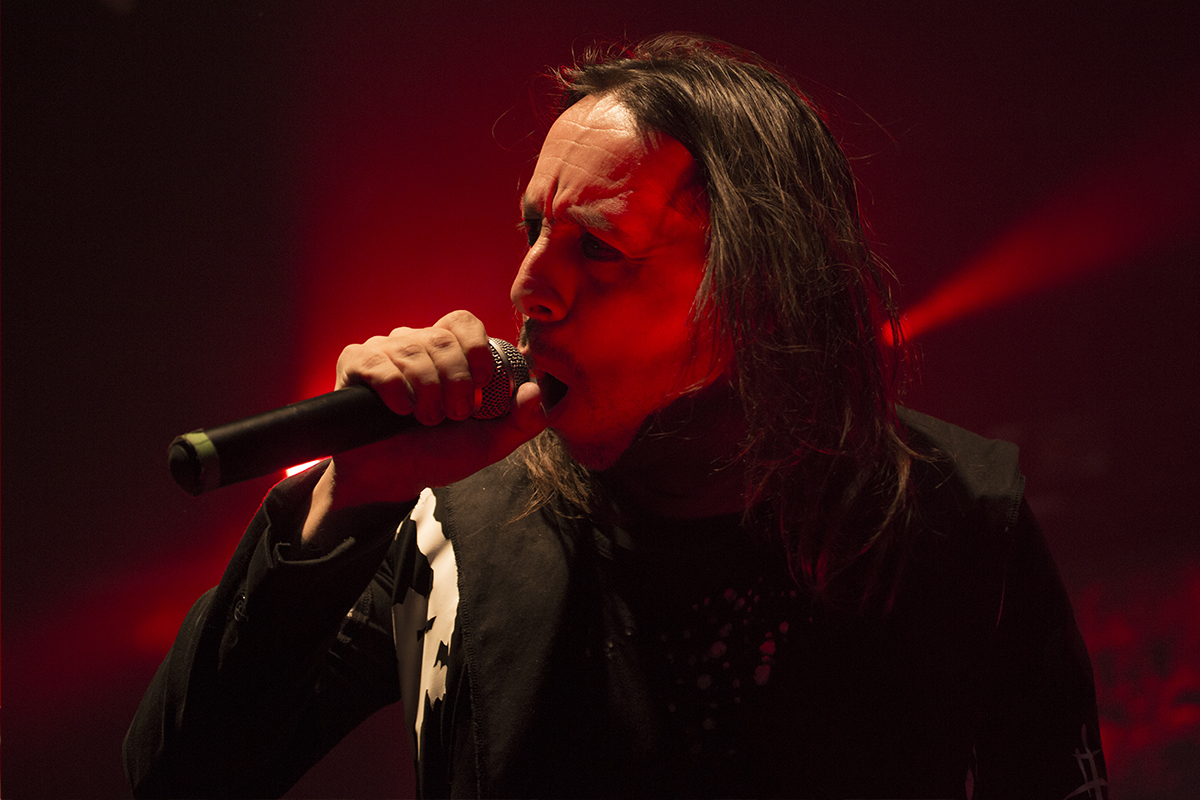 I want you all to sing along on this next one,” says Scabbia towards the end of their set. “All of you know it.” She’s right. The band burst into a cover of Depeche Mode’s ‘Enjoy the Silence’, offering a heavier spin on the 90s classic. Lacuna Coil do a great job of teasing out the original’s unsettling mood into a full-on rocker. Towards the end, they indulge in an acapella rendition of the chorus, giving the whole audience a chance to join in.

Following a brief encore break, the band return to the stage to deliver a few more cuts from their back catalogue. They kick things off with their 2016 festival single ‘Naughty Christmas’. Even if you’re one of those people who believes Christmas celebrations should be restricted to December – like this writer – it was hard not to smile during the performance. The song opened with a wash of tinkling sleigh bells and strings before the pounding drums reminded the audience who was playing. With its playful Jingle Bells-like vocal melody, the song made for a silly standout moment.

Finally, the band closed the show out with the undeniably anthemic ‘Nothing Stands in Our Way’. As the final note rang out, there was no doubting that Lacuna Coil still has it. Here’s to the next 25 years.

Words by Elliot Simpson, this is his first piece of writing for Louder Than War.
Photos by Michael Brumby