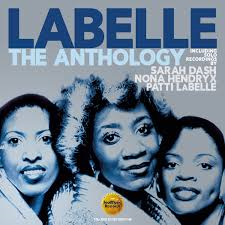 2CD collection of the ’70s soul/funk trio best known for the 1974 US chart-topper Lady Marmalade, which also delves into their respective solo careers. Ian Canty looks at the disco divas who were much more than that.

Although Labelle came to prominence at the dawning of the disco era in 1974 with their massive US hit Lady Marmalade , they were a much grittier proposition than one might think at first sight and far from an overnight success.

Patti Holt (nee Labelle) had began singing in the late ’50s and the original trio first crossed paths when Sarah Dash and Nona Hendryx joined her group of the time the Ordettes. Cindy Birdsong came on-board a little latter and with the name of the group amended to Patti Labelle And The Blue Bells (to differentiate between another band called the Blue Bells years in advance of the Glasgow act of the ’80s) they hit the famous R&B “chitlin’ circuit”. It didn’t take them long to carve out a big reputation for themselves and they became known as “The Sweethearts Of The Apollo” due to the rapturous reception they received at Harlem’s hallow venue.

Opportunity was knocking. They supported the Rolling Stones on a 1965 tour and signed to Atlantic in the same year. As the years went by they racked up a number of US R&B and Billboard chart hits, but by 1967 they were entering a spell in the doldrums with Birdsong decamping to the Supremes to take over from Florence Ballard. Let go by Atlantic, they were persuaded to shorten their name to just Labelle and base themselves in the UK by new manager Vicki Wickham (who was once a scribe for an early ’60s magazine Mod Monthly and also produced the TV series Ready Steady Go).

Though Patti Labelle herself was unwilling for the band to desert their US fanbase, this move would give the threesome a vital second wind. Despite being away from America, they embraced the trend towards afros and space style accoutrements that was rife on the US Funk scene at the time. The more ‘street’ style was reflected in a tougher musical approach too, with the band cutting some great funk and even pile-driving rockers. They imbued their songs with the kind of “don’t mess with us” aura that was a breath of fresh air in the early ’70s. Laura Nyro sought them out to contribute to her successful Gonna Take A Miracle (they were always in demand as backing/co vocalists) and in 1974 they made their breakthrough with Lady Marmalade, but after further single and album success in the states they split in 1976. All three embarked on solo careers and they would an occasion reassemble, the last time resulting in the 2008 LP Back For Now, the title giving a clue to the transitory nature of the reformation.

What this new anthology does is draw together the hits and best album tracks, but also look at the early years of each of the trio’s solo careers. The first 10 track are the only pure Labelle recordings and while they’re great stuff and demonstrate different facets of the group, I can’t help but feel I would love to hear more. I suppose though that is not the purpose of this collection and for another day. Their segue of Thunderclap Newman’s Something In the Air and Gil Scott Heron’s The Revolution Will Not Be Televised is inspired – after the hope of the former song they ratchet up the tension and take Scott Heron’s classic back to the street, full of atmosphere and intensely funky. Lady Marmalade itself might have been subjected to over-exposure on many a ’70s throwback disco (after being pretty much ignored for 20 years until the ’90s), but it’s a far more Funky and tough affair than the standard swish Disco and Labelle are full of attitude on this ode to a New Orleans working girl.

The rollicking Who’s Watching The Watcher proves these formidable women could rock with the best of them in the mid-’70s and they punch out some JBs style funk on Are You Lonely. You guess is as good as mine as to why Messing With My Mind wasn’t a big or bigger hit than Maramalade – it has everything going for it with tight playing, the mandatory excellent singing and a cool and original structure. The ten tracks before we dive into the solo offerings show what a great band Labelle were and how they could handle virtually anything – Rock, Soul, Jazz-Funk, ballads – and turn them into gold.

Sarah Dash probably had the lowest profile of the members of Labelle after they split, her work as an in-demand session singer taking up a lot of her time. She did however score a sizeable dance floor hit with Sinner Man in 1978, a stylish piece of Soul with some male vocal input in the Barry White mode. Perhaps her strength lay in expansive ballads, her spirited vocals creating magic on touching I Can’t Believe (Someone Like You Could Really Love Me), though she did also try her hand at sparky 80s Pop with 1983’s Leaving Again. All three feature here and serve her vocal obvious talent well.

Out of the three the solo career of Nona Hendryx the most adventurous – she sang vocals with the Talking Heads on Remain In Light and even had her own No Wave combo Zero Cool. Perhaps her biggest success was on the monster “Bustin’ Out” with Bill Laswell Punk-Funk band Material (who also backed her on the hit Nona album in 82) – her vocals on it a masterclass in attitude and cool. She sounds like she’s going to bust straight through the speakers and tear you a new one! All to a thumping and highly addictive Punk Disco beat. Unfortunately that is not included her as it falls outside of this anthology’s remit, but what is here provides ample evidence of her uncanny knack for putting a new slant on things.

Though we don’t have anything from her self-titled and hard rocking debut LP, we do have three tracks recorded in 1979 as part of an unreleased platter. From these sessions You’re The One I need marries a jerky Blues rhythm to a ’60s style R&B strut and some proto-Prince-style guitar soloing breaks up the smooth ballad Casanova. B-Boys from 1983 shows she had her ear to the ground with regard to Hip Hop, producing a great bit of danceable Soul in the process. Transformation is a brilliant piece of Electropop Soul, showing that she wasn’t happy to rest on her laurels, always pushing further for something new and interesting. Nona’s work was obviously characterised by her big voice but she proved open to new ideas and going on through the mid-’80s, as documented here, she kept her musicial outlook fresh, addictive and thoroughly modern. Great stuff.

Patti Labelle clocked up many hits during her solo career (climaxing with 1986’s US/UK smash one On My Own with Michael McDonald) and even went onto host her own television show in 1985. However here we concentrate on the years between 1977 and 1980 when she signed to Epic Records where, although she scored many R&B and Disco chart hits, mainstream success eluded her. Though what Patti recorded during this timespan was very commercial and some of them must have gone down reasonably well on the dancefloor, it’s not quite as inventive as Nona being for the large part well-sung Soul ballads. One these the Gospel-tinged You Are My Friend is probably the best, it is lovely. There’s a nice Bossa Nova influence on the catchy Teach Me Tonight and Release (The Tension) is a gutsy fire-cracker, but though what Patti turned out in that three year period was solid enough those are the tracks that stand out, which is probably why she struggled in vain to reach the US charts.

All in all this is another little gem from the SoulMusic archive showing that Labelle were great as a unified force but each of their solo careers were interesting and diverse too. This collection works as a great primer for the work of the band and also an interesting look at what followed. They were far more than just one hit Disco wonders as the Labelle material featured all still sounds fresh and vibrant. With all three members possessing great talent as singers the solo tracks are no slouches and in particular it was a joy to hear Nona Hendryx’s as she was pretty much unique, sassy and cool. Labelle might have only had a fleeting chart presence but their value gets a handy restatement here.