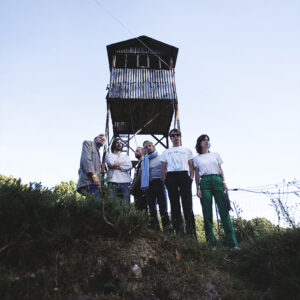 La Route Du Rock in Saint Malo has been going for 26 years now, and in that time little has changed. The independently-minded ethos to offer the finest in alternative music while uncovering the best new bands has never faltered, meaning LRDR has gained a similar cultural caché to the UK’s ATP in France, without the financial meltdowns or unreliability. The team behind the festival operate with the kind of prudence that allows British punters to come for around £150, ferry across the channel and camping included, and while there are no real bona fide superstar draws this year, it’s a wholly consistent and lovingly assembled programme as ever.

One new and unexpected addition to proceedings is a large army presence around the perimeter. At first it’s startling seeing camouflaged soldiers stood around with massive guns, but ultimately it’s reassuring, and without being too pessimistic, it may be a sight we all have to get used to in the coming years right across Europe.

Out of the main headliners, Savages are the most rousing, though having covered them twice already this year, I couldn’t possibly write another word (here’s a report from their show in Slovakia I did for The Quietus if you’re feeling hard done by).

Just as thrilling in a different way are Biarritz’s finest, La Femme, who preside over an unholy alliance of krautrock and French yé-yé, a surprisingly glorious and, at times, hypnotic combination. La Femme shows are usually characterised by their busyness, so it’s unusual to witness them pared down for a change, even if the music remains at all times rumbustious. There are no gimmicks, and no other girls; Clara Luciani is presumably off pursuing her solo career, so lead singer Clémence Quélennec is the lone femme tonight, in keeping with the titular promise for once. With just five of them on stage, with no dancers or surfboards or any other frills, it’s a bravura display, full of energy and confidence and great new songs, with ‘Sphinx’ the creme of the crop. If you’ve not had the pleasure then cherchez La Femme.

Perhaps the most recognisable band on the bill is Belle and Sebastian, the Scottish indie rockers who despite being around for 20 years, continue to peddle their inimitable brand of twee infantilization. Fans are sated with old favourites like ‘I’m A Cuckoo’, ‘Funny Little Frog’ and ‘The Boy With The Arab Strap’, but only ‘Step Into My Office, Baby’ really has any bite.

Bite is not what you go looking for if you’re at a Tindersticks gig, but they manage to retain the attention of much of the audience, despite being of a more gentle disposition. Stuart Staples’ tortured bleating is for hours after dark in close confinement, preferably indoors and with hard liquor, though they make a decent fist of it nonetheless.

Further down the bill, and the Lush renaissance continues unabated. Miki Berenyi apologises for Brexit, and for her French pronunciation on ‘Desire Lines’. She also tells the crowd she’ll be pleased when the show’s over so she can go and get pissed, like an Arabella Weir character from The Fast Show. The between song banter is painfully amusing, the sound from the band – with the help of Justin Welch on drums – is as enchantingly, hauntingly gothic as their 1989 mini-album debut Scar, if you can remember that far back.

The Fat White Family are a handful on stage as ever, and they provide a fine sideshow too, with their new drummer scratching around backstage trying to cadge a lift to Paris; new, but apparently old as well – he was in the first incarnation of the band, having then been thrown out until recently. How long he’ll last this time is anyone’s guess. ‘I Am Mark E Smith’ sings Lias Saoudi, and with the constant revolving door of musicians in and out, you wonder if he is indeed the rightful successor to the bellicose Fall frontman. That said, Saoudi has a surprising amount of stagecraft for a nihilist, with the crowd exactly where he wants them on classics like ‘Touch The Leather’ and ‘Whitest Boy On The Beach’ (the latter would be a hard one to call if one was to flâner along the Saint Malo promenade in the day time).

Minor Victories retain some of the dynamism of Stuart Braithwaite’s other band, Mogwai, though with Rachel Goswell of Slowdive on vocals, it’s a surprisingly far poppier proposition than the usual output of either. Supergroups are often vanity projects, and are – for want of a better expression – invariably shite, but there’s something organic and cohesive about Minor Victories that makes them feel like a proper band. And a good one too.

Finally, Julia Holter plays her second ever La Route Du Rock set on Sunday in the sunshine. Hidden behind dark shades, she produces a set of luminescence nevertheless. The focus naturally is on last year’s well received Have You In My Wilderness (aside from her Dionne Warwick cover ‘Don’t Make Me Over’), and while ‘Sea Calls Me Home’ is conspicuously missing the sax break from the record, the performance itself loses none of the song’s quirky majesty.