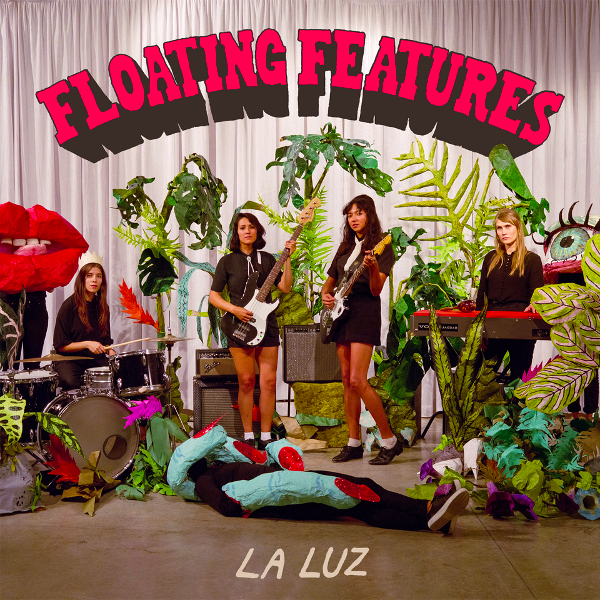 Third album from Surf-noir quartet and possibly the one which sees them break through into the mainstream.  Hopefully not says Ged Babey who likes to keep the very best bands a ‘secret that only cool people know’.

If you only buy one album this summer, then this is the one. It is absolutely perfect in every way. (Well, if you like a cocktail of Dream-pop & Surf-punk, shaken but not stirred,,,).

If you have listened to BBC Radio 6-Music at all in April then you won’t have escaped the sound of La Luz.  (a variety of pronunciations La Looth or La Looz …)

They are a ‘buzz band’ according to Chris ‘the Hawk’ Hawkins – a radio presenter with no discernible personality. A music bluffer whose knowledge is so limited he talks pure regurgitated PR BS… A man who has turned insincerity and babbling repetition into an art-form.  A DJ so loathed by his fellow DJ Shaun Keaveney that their hand-overs are the stuff of legend.  (They pretend it’s ‘an act’ but I’m totally convinced Shaun effin hates him as much as I do!)  A man who genuinely thinks that Public Service Broadcasting and Slow Readers Club are “cutting edge”….  Anyway I’m getting off the point…. but he’s the human pimple on 6-Musics otherwise spotless face…  (Enough -LTW Libel Lawyers)

La Luz were the best kept secret in rock’n’roll.  Now the cat is out of the bag.  They are gonna be massive. as big as Pixies. (With whom they share a Hispanic kinship). I hope not though.  They are too good, too cool, too perfect to be Joe Publics Flava of the Month and then cast aside.  La Luz are for Life, not just for Summer 2018.

La Luz are mesmerizing.  Surf -Noir.  Doo-wop Shoegaze. They sound like Dick Dale jamming with the early line-up of Lush.  Or Julee Cruise singing with the Pixies on Shangri-la’s numbers…. for a Tarantino spoof of Twin Peaks… kinda. (These are a few of my favourite cliches, whiskers on kittens style.)

La Luz combine two of my favourite musics from different kitchens (other than punk rock): the spine-tingling reverb of Surf, and the sassiness, sulk and melancholy of Girl-Group, with a bit of Lynchian weirdness (This decades “On Acid” LOL) .

Of course its Verboten to mention La Luz in terms of gender in this post #metoo era. But fuck me, they’re a chick band as good, if not better than any cock-band who can play cool surf with jazz and prog-time-signatures and maintain a straight-face when they are obviously aware that they are a supremely great band.  It is their femininity and gender which is part and parcel of what makes them extra special.  It’s the essence of their song-stories.  Girl-meets-Boy,  Girl-battles-supernatural-demon, Love-and-monsters.   They have a cool uncontrived geek-girl look  and you can tell they are more into their cult movie, literature and TV than gender politics and they have fun in their videos, as you can see….

The Creature is my favourite track. (A spiritual transatlantic cousin to the Only Ones The Beast perhaps?)  But the whole album is a joy. Perfect in every way, from every angle, at any time of day, rain or shine, but possibly at its best speeding down a highway at night, high as a kite, heartbroken into little pieces, being chased by nightmarish creatures with the body of a lizard and the head of your ex.

The label the band are on, Hardly Art,  celebrated ten years in the biz last year and they seem to be bringing out some magical music;  Chastity Belt, Shannon and the Clams among others. I confess I didn’t know that it is the sister-label to Sub-Pop – which explains a lot, in that I should’ve known that as well as a label of quality & distinction, its run by cool people with a history of great taste.

La Luz deserve success and as great as I’m sure they are live, what will cement it is getting on the soundtrack to the right movie or TV series.  They will then become the natural successors to the Dick Dale & the Del-Tones, those Myrmidons Of Melodrama the Shangri-La’s and of course the Pixies (when they were in their prime) and Mazzy Star.

Floating Features is the album which heralds the Summer of 2018. Phantasmagorical and just plain fantastic.

Opinions expressed in this review about BBC 6-Music DJ Chris Hawkins are solely the opinion of the author and not necessarily shared by others at Louder Than War.