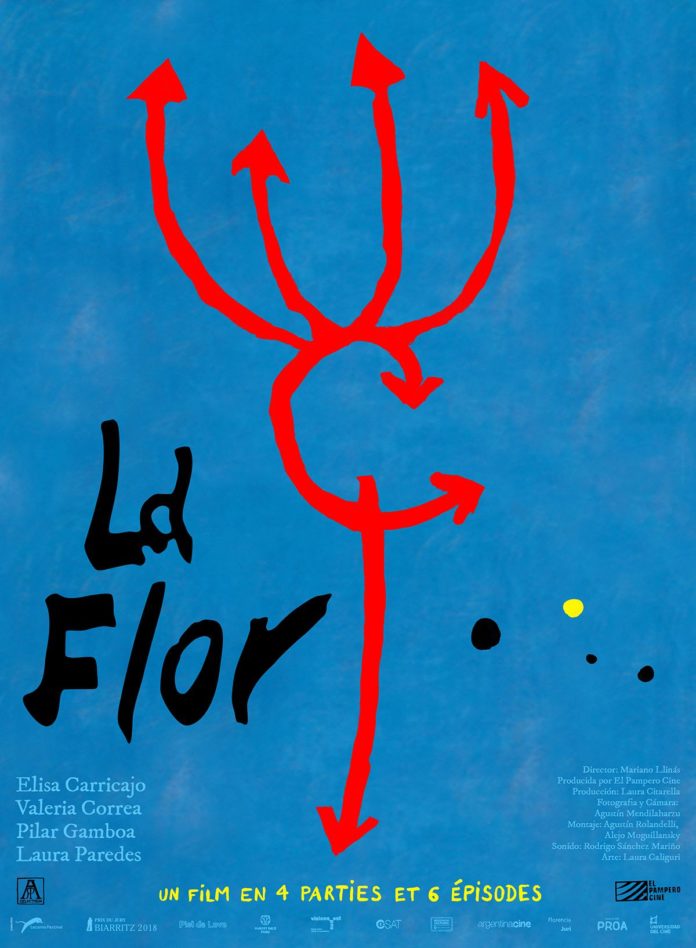 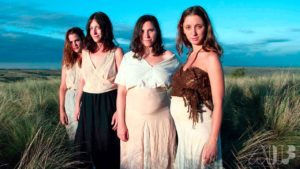 Jonathan Bradshaw straps in for a trip that is gargantuan in length and ideas, with four actresses acting as an anchor in a narrative that transcends time and genre to deliver a truly unique cinematic experience.

With an extraordinary run time (intermissions included), trying to condense La Flor into something sizeable to read and digest is a challenge in itself. There’s so much going on within the film that I could get carried away and ramble on, as this film does in places.

Just before the odyssey begins viewers are greeted by director Mariano Llinás seated by a quaint parkland table. He then proceeds to give you an overview of how the film works; the film is comprised of 6 episodes. The first four have a beginning but no conclusion. Episode 5 has a beginning, middle and end. Episode 6 has just the conclusion. This makes up the titular ‘flower’, which forms the film’s structure.

Llinás states that each episode is self-contained and has its own genre. The only connection they have are the same four female actresses who inhabit wildly different roles each episode. They work as anchors for the viewer within La Flor but as each episode progresses, their presence and role gradually decreases. 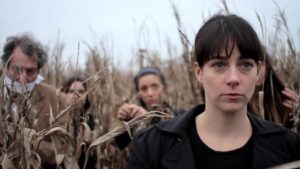 With the film being 10 years in the making it becomes obvious that certain episodes are better crafted than others. This is no doubt due to better shooting equipment being made available. I feel that Llinás is demonstrating to us how certain genres are considered ‘better’ than others.

This is a monster B-movie and contains a grainy look accompanied by shaky cinematography. The narrative is also shaky as it involves an unearthed mummy which may have caused a mysterious illness to fall on the base. There are some tense beats with loud dramatic music as befitting the genre. Ultimately though, this episode shows its age but is relatively entertaining.

This takes the form of a melodramatic musical in which two former lovers are in conflict. Their feelings towards each other are encapsulated by a song they struggle to finish. This episode is slightly more polished as it looks at the idea of two sides to each story, as we flit back and forth between the couple. It asks the audience to make up their own judgements on the conflict. A side-plot involving a doomsday cult builds up tension but cuts just as it reaches a crescendo.

A plot spanning the globe and involving international assassins and spies, this episode pays homage to 1970/80s spy movies. I feel that this is the weakest of the episodes as the length results in a bloated narrative, particularly in the flashback sequences. There’s some questionable voice dubbing and a lot of exposition through voiceover which eventually becomes distracting. A worthy attempt but it ultimately falls flat.

By far the strongest, with a meta narrative about a director with an elaborate film he is struggling to complete. The 4 actresses become muses who present conflict for the director. It’s humorous in places as it showcases the absurdity of filmmaking with the crew attempting to set up a shot. A mid-film strand about Casanova has hints of Barry Lyndon, which fits right in with the slow pacing.

The film begins to take a different approach going into Episode 5. It’s a remake of Jean Renoir’s Partie de Champagne but mostly silent with some musical notes. There is some good cinematography of an air show as well as the field scenes. However I feel that viewers unaware of Partie de Champagne will lose interest pretty quickly, as I did.

The shortest but visually interesting, this episode is presented like a moving watercolour painting. The four actresses become mere shivers on the horizon as we follow their escape across a desert.  There is a sense of detachment with this episode, but I feel that Llinás is stating that the journey is over and it’s time to watch the credits. 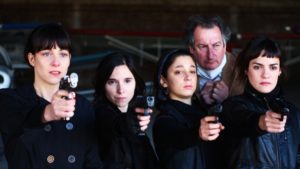 As the final episode ticked over I left the dark surroundings of the cinema. On final reflection I simply wouldn’t say La Flor is ‘good’ or ‘bad’ as these would be too simple as labels for a film this big. I admire Llinás for this crusade, as it really takes apart the medium of film and shows us the potential directions it can go in.

As to the final result, I feel that some elements work more than others and suffice to say, the film contains more moments which don’t work than moments that do. You’ll be amazed and frustrated, but that’s to be expected. For the hardcore cinephiles though, I recommend it as it’s a truly unique slice of cinema, one not to be repeated anytime soon.