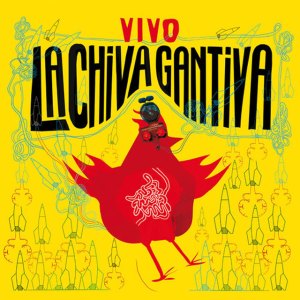 I like a bit of Afrobeat. I find it an incredibly underrated musical genre, full of life and passion that you rarely seem to get in any other musical source. What is quite astonishing is its influence on other types of music right down to mainstream stuff pumping out on your radio on an hourly basis. What is particularly intriguing is when it appears on albums like the new one by La Chiva Gantiva.

Originally three Columbians based in Brussels, they now have members from Belgium, France and Vietnam completing the line-up and the end result is something rather special. I’ve rarely heard such an explosive album since the release of the amazing Fly On It by The Apples where carnival punk meets funk meets Latin meets rock, etc..etc..etc..

Frenetic percussion blends with traditional Caribbean instruments and vocals which somehow manage to keep from tangling themselves together. Influences from Fela Kuti to Red Hot Chili Peppers, from James Brown to Rage Against The Machine are all too evident. It’s a bewildering prospect but one that really works.

Title track Vivo gives you a taste of what’s on offer. Less than three minutes long but packed with power and passion and some quite amazing instrumentation.

French spoken track Pigeon has some ripping guitars and lyrically tries to break down European stereotypes between themselves and their Latino counterparts. Funky party time with El Pollo (avian obsessed?!) where a heavily percussive track with added saxophone and clarinet tells of a man always complaining but never changing.

Aside from some cracking rhythms, there are also clearly some well worked lyrics here, albeit the majority are in Spanish, but the whole feel of the album is quite superb. Not only a feel good album but also one of twelve brilliant tracks just bursting out waiting to be heard.