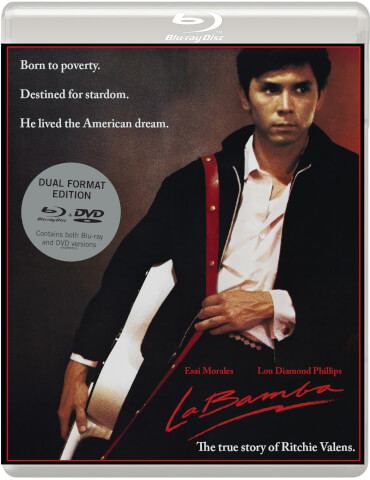 Jamie Havlin takes a look at the 30th anniversary re-release of the fondly remembered biopic of Ritchie Valens.

Named after the much loved rock and roll single by Ritchie Valens, La Bamba traces the short life of the Californian born singer, the son of impoverished Mexican immigrants and one of the first Hispanic rock ‘n’ roll stars.

Shot in slow motion and in washed out colours, the movie begins with some kids playing basketball in a school playground while above in a pure blue sky, two planes move towards each other. Then collide.

Is this a flashback to a childhood memory or prophetic nightmare? This question will be answered in time.

It’s the summer of 1957 and the boy who will become Ritchie Valens (Lou Diamond Phillips) is living in a campsite with his family and earning a few bucks picking and packing fruit.

It’s clearly energy sapping work in sweltering West Coast heat but Ritchie makes the most of it and entertains his fellow workers around a campfire at night with his guitar.

Valens, as portrayed here, is an almost fanatically focused teenager and when he isn’t strumming his instrument in his spare time it tends to be slung over his shoulder. He even claims to sleep with it. ‘My dreams are pure rock and
roll,’ he explains to his half-brother, Bob (Esai Morales).

Riding around on a chopper and dealing weed, Bob is the black sheep of the family, the polar opposite of his younger brother. While Ritchie is polite and relentlessly positive, Bob is belligerent and a bully.

He’s hardly out of jail when he steals Ritchie’s girlfriend albeit this brings him little happiness. ‘I almost have to rape her just to have sex,’ he complains to Ritchie as if to invite sympathy, and his relationship with his sibling is complex, consisting of support and resentment in roughly equal measures. 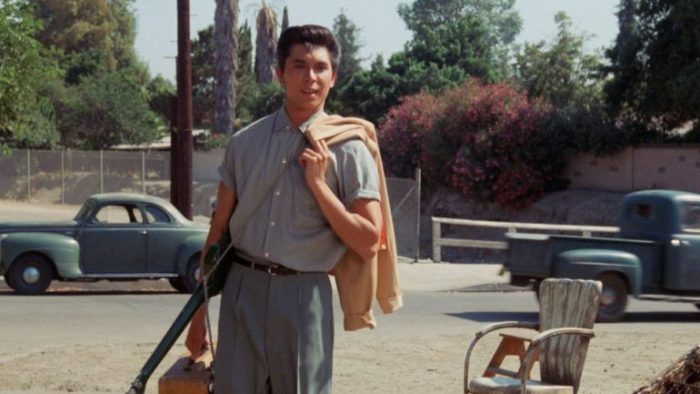 From guitarist in a two-bit local outfit, Ritchie rockets to next big thing status, helped along the way by record producer and label owner Bob Keane (Joe Pantoliano). He records and scores a hit with his debut single and two more quickly follow – one dedicated to girlfriend Donna (Danielle von Zerneck), a saccharine blonde, whose WASP father predictably isn’t keen on Mexicans which at least adds some much needed conflict.

Soon the latest musical sensation will be touring the States with fellow stars Buddy Holly and The Big Bopper.

You very likely know how that tour ended.

If I was to draw up a list of my favourite films, I doubt any rock biopic would make it into my top one hundred.

Yes, I have enjoyed a number of them from The Buddy Holly Story to Control but most are flawed, sometimes fatally so. The ones I have most enjoyed most, such as the two mentioned, have featured vocals by the actors themselves: Gary Busey imitating Buddy’s vocal hiccups and Sam Riley channelling the Joy Division singer’s baritone. Here, as Ritchie auditions for a local garage band, it’s immediately clear that the actor is miming (with David Hidalgo of Los Lobos supplying his singing voice) which I did find off-putting.

This heartfelt and affectionate tribute is engaging enough throughout albeit it sometimes veers towards the clichéd. Its central character has no real character arc and problematically too, the scenes he shares with Bob are far more compelling than those with Donna.

Lou Diamond Phillips (Young Guns, Che) will never be one of my favourite actors but this is one of his better roles although Esai Morales impressed me more, excelling in the role of the bad boy.

Also on the plus side, the film features some wonderful music, the highlight being a superb sequence with the young singer joining a bill that includes Eddie Cochran (Brian Setzer), Jackie Wilson (Howard Huntsberry) and Buddy Holly (Marshall Crenshaw). The cameo from Los Lobos in the guise of a Tijuana bar band playingLa Bamba in its traditional Mexican style is also very enjoyable, although maybe not quite as joyous as Ritchie’s inventive version.

Eureka Entertainment presents La Bamba on Blu-ray for the first time in the UK as part of a Dual Format edition.