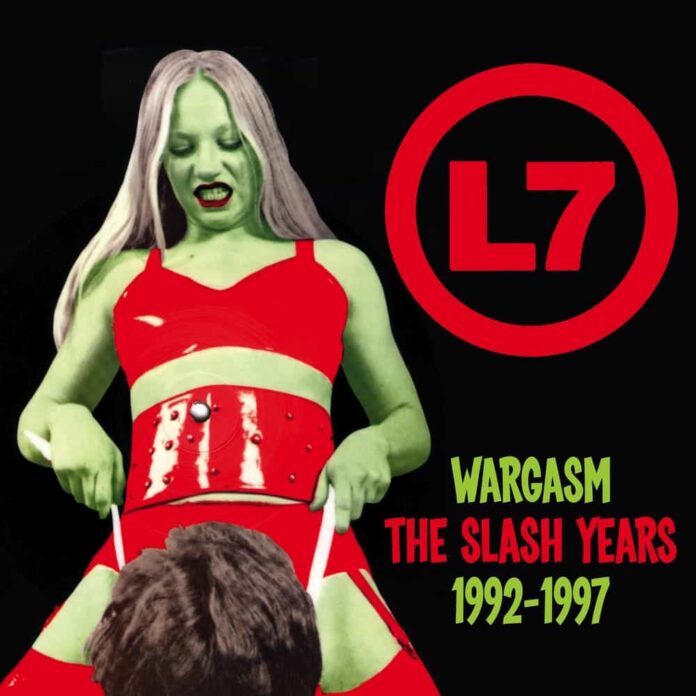 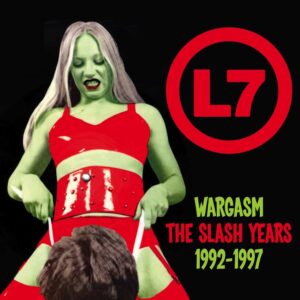 The bands best three albums: Bricks Are Heavy, Hungry For Stink and The Beauty Process: Triple Platinum plus b-sides, boxed up and a thing of beauty. Probably the most under-rated rock band of their era and beyond, says Ged Babey.

L7 were.. “On a par with the twin-godheads of Ramones and Motorhead and should be mentioned in the same breath as part of an Unholy Trinity of great, no-nonsense rock bands” say I.

The fact L7 were all-female (like the Runaways, the Go-Go’s, Slits, Fanny, Girlschool, Goldie and the Gingerbreads…) means both everything and nothing. The existed as a unit who made the music they wanted and didn’t give a shit. They were “all-girl” but more importantly all-attitude and pro-fun as well as pro-Choice.

The infamous trouser-dropping on the Word and tampon-flinging at Reading Festival were not to ‘court controversy’ but because they simply weren’t going to moderate their behaviour for anyone.  Reframing it as feminist activism with socio-political intent is perhaps wrong, yet at the same time understandable and totally righteous.

Brought together and played back-to-back these albums are flawless. As the sleeves notes say: A punk attitude, hard rock aptitude and a grunge mentality combined to create their own vision and style.

If you haven’t seen the superb docu-history Pretend We’re Dead – it is on Youtube before you buy a copy.  If you are reading this then chances are you know these albums inside out -and love them as much as I do – but if you don’t here are the Top Ten L7 Highlights from the Slash Years.

Pretend We’re Dead  The big hit single and built on a pure Joan Jett/Runaways style chassis with that cheese-wire hook that burns through it and Dee Plakas, ‘the Goddess of Thunder’ at her best on drums.

Questioning my Sanity. ‘I’m saving my piss in a jar / this depression has gone too far..‘ is a great opening gambit. The live performance of this on French TV remains a one-woman ballet of chaos and destruction as Jennifer Finch turns loosing-it into an art-form.

Fuel My Fire – as covered by the Prodigy no-less on Fat of the Land.

Wargasm  “Wargasm, wargasm  1-2-3 / tie a yellow ribbon round the amputee”

Shirley  A one song history lesson in feminism in action. Best use of samples in a rock-song ever. Arguably the very pinnacle of L7’s output.

Drama. The biggest fuck-you to cock-rock guitar-heroics in a song where the solo is played on one of those kids electronic toy keytars which emulate ‘Metal’.

The Masses Are Asses  just a great big grungy shout-a-long – pure pop yet pissed-off . Poetry’s in motion but not in my mind / Poetic justice will come in time.

Used To Love Him  (B-Side Guns’n’Roses cover) One of G’n’R’s most misogynistic songs – I used to love her / but I had to kill her.  Even though she’s six foot under / I can still hear her complain. The genders reversed and its him that’s pushing up the daisies.

Interview (b-side). The most excruciating interview with a female band ever – conducted by an uber-fan geek with no radio experience and a procession of insane callers phoning-in. A mom, a Pearl Jam fan, a dude and a psychopath ‘on crank’.  Both hilarious and jaw-dropping.

As the press release says: L7 would record one more album during the 1990s before calling it a day in 2001. They would reform in 2014, touring extensively, and enjoying a creative renaissance, releasing their seventh album “Scatter The Rats” in 2019.

Slap-Happy and Scatter The Rats both have some great moments but the Slash Years were them at the top of their game: indisputably the most rockin’ all-female band of their day.   Babes in Toyland were darker and stranger,  Hole were more ego-driven and commercially-minded. But L7 were a gang. They had each others backs. They were all as important as each other.  And they had great songs.  Simple, direct songs that were clever, funny, catchy, heavy and rocked.

Basically, there are only two other three-consecutive-album sets as good as this: Bomber / Overkill / Ace of Spades and Ramones / Leave Home / Rocket To Russia.  And that’s all you need to know.