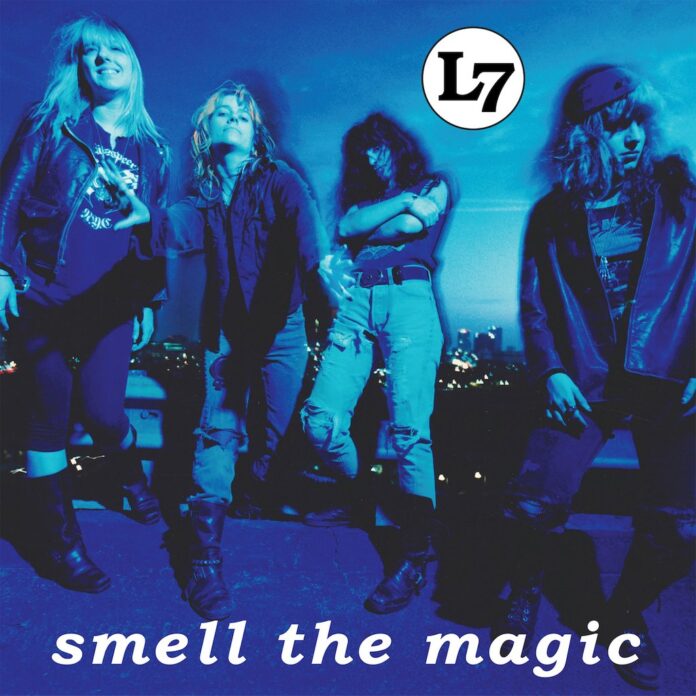 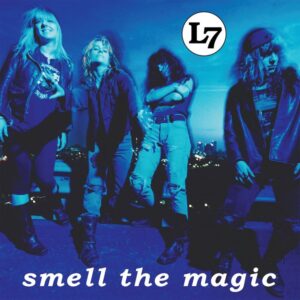 30th Anniversary Edition of the fiery, American grunge pioneers second album remastered and on vinyl for the first time ever!  Most under-rated band of the era – says Ged Babey.

For me, personally, L7 were THE band of THEIR era. The ‘Grunge Years’ for want of a better name.  And if ever there was a guitar-sound that was truly ‘grunge-y’ it was L7’s.

I think they pissed all over Nirvana (metaphorically).

I’m not courting controv. I mean it.  But then I always preferred Hole to Kurt & Co as well. I rated Babes In Toyland as being far more interesting than Mudhoney or Tad or any of the male acts.

It could be put down to the fact they had a male drummer but more likely is it was a rushed-job by a band who weren’t ready and hadn’t written a decent song yet.  It was two years later that Smell the Magic appeared and they were metaphorically and literally ready-to-rock.  As the press release says…

A multitude of rock music scenes populated the expanse of Los Angeles in 1989: hardcore punk, industrial goth, roots rock, and Sunset Strip hair metal, to name a few. L7 fit into none of them, creating their own unique blend of punk and hard, hooky rock loaded with humour and cultural commentary.

A sizeable proportion of punks always had a fondness for old-school metal and the then-newer sleaze-metal, which meant L7 couldn’t lose as far as attracting a broader range of fans from all camps was concerned.  They had the smart-but-dumb appeal of the Ramones and the hard and heavy ethos of Motorhead all tied in with Spinal Tap as guidebook humour and punk-rock-feminism bedrock.

The memorable career-highlights of trouser-dropping on the Word and tampon-flinging at Reading Festival will forever be the first thing that comes to mind when they are mentioned – but they were a musical force of nature.  Naturals. Unfettered rock’n’roll. On a par with the twin-godheads of Ramones and Motorhead. L7 should be mentioned in the same breath as part of an Unholy Trinity of great, no-nonsense rock bands.

To tag them as Grunge with such overblown dullards as Pearl Jam and Soundgarden is plain wrong  (As ever, I view things from a punk-rock viewpoint, and when you get to the crux of it, the Trinity were punks.)

Originally released in 1990, Smell the Magic is a landmark of ’90s feminist rock. Says the Press release – and although they were feminists (doing Pro-Choice benefits and the like) songs like Fast and Frightening are just sheer biker-rock rebel-pop with a cartoonish glee.

What follows is part of a syndicated interview where the band talk about the album track by track: After telling us where the album title came from…

Donita: We, along with most other bands at that time were constantly referencing This Is Spinal Tap. I’m sure that got into our psyche. But the title “Smell the Magic” actually came from an overnight drive on tour through an industrial part of the U.S. I was sitting shotgun, and Suzi was driving the van. We were both laughing because it smelled so bad. And she said, “Oh god, smell the magic.”

Donita.  “Fast and Frightening” is an homage to a strong female fantasy-cartoon person, a little bit of Becky Wreck from the Lunachicks, who had a motorcycle. “Poppin’ wheelies on her motor bike, Straight girls wish they were dykes”—that’s where that line comes from.

And talking about opening track, released as a single. Shove…

Jack Endino, our producer, was playing a reel to reel tape that Mudhoney had previously recorded a jam session on. We were like, “Let’s start our single with that!” We cut into Mudhoney’s jam session at the very beginning of “Shove” just before the signature riff kicks in. To this day, I don’t think Mudhoney is aware of this…

… we decided on a Fiends cover, “Packin’ a Rod” for the B Side. We thought that song was funny and base, but with a female singing… it took on a whole new meaning.

Suzi: My brother had a girlfriend who was in prison. She told me she was reading a lot of paperback novels there, so I just kind of built “Broomstick” around that. It’s about being left in the dirt. She died in that prison. That song is very emotional for me.

Jennifer: Thematically, as a writer, I’m always about being overwhelmed. “(Right On) Thru” is about that. Windows are broken in the apartment. They’re broken in the car. You can’t keep anything out. You just have to let it flow.

Donita: “Deathwish” is kind of about how we’ve all been worried about each other. Because at one point or another one of us was doing too many drugs or drinking. This band has been both off the wagon, and on the wagon—but not ever all of us at the same time.

The guitar lead I did on “Deathwish” is one of my proudest moments. Sometimes I can come up with a lead that’s tasty and good. But as far as channeling a lead in real time? That has very rarely happened to me. That’s the longest lead I think I’ve ever played. Jack just let the tape roll.

Suzi: “Till The Wheels Fall Off” is also about doing it to the extreme. There isn’t a big story there. It’s just about trying to stay together.

Dee: The album holds up for what we’re known for: We’re a heavy rock band, but you can always sing the songs. How you present yourself, what you say—that’s your politics right there.

Donita: You know that line from Fast and Frightening “Got so much clit she don’t need no balls” … that about sums it up.

Only nine songs but all killer no filler. L7 had arrived. The later albums were even better… but for now… take a deep breath, inhale a lungful and Smell The Magic!  On vinyl at last.