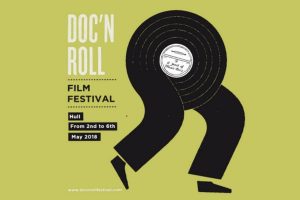 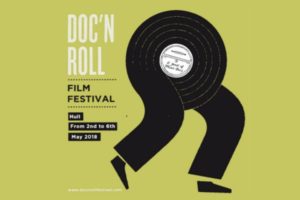 After shooting hours of on the road footage to stop them going mad, Sarah Price makes it into L7: Pretend We’re Dead. L7 is bebop slang for a square. Flailing around like a punch drunk Mailer with Korsakoff’s is a Steve John intent on proving he ain’t but can he survive a Bank Holiday in Hull?

In practise, putting yourself in the capable hands of the people from Hull Independent Cinema and the Doc’n Roll crew from London complimented it perfectly. Post pint in the sun and pre arrival at the two up two down Adelphi, I will admit to a little uncertainty about how a documentary would translate into the legendary venue. Or were we going upstairs to watch it on the owner’s sofa?

Thankfully the fact that the film ran like a gig made it perfect for something as impactful as many a good live show. L7 reunited in 2014 after a kick-start from Dave Grohl when they didn’t feature in his Sound City documentary and a Kickstarter campaign raised money for Pretend We’re Dead. The Director is gracious enough to describe it as made by the band on the basis of putting it together after being given over 140 hours of tape and a hair colour guide to identify the year from. Life is cruel because while she describes herself as a massive fan who had never seen them live I only thought they were good and spent the early nineties not being able to avoid them.

The film follows the fairly traditional band gets together, does well, splits up and reforms trajectory but goes stratospheric thanks to a pedal to the metal reflection of L7s approach to life. From the opening Fast and Frightening’s coupling of gonzo Motorhead with “got so much clit she don’t need no balls” the pace is virtually unrelenting and objections inaudible or dismissed with cracking one liners. Handling all this brilliantly on the Lollapalooza tour is Nick Cave cast as the willing fall guy in their slapstick punk world. If you have ever wanted to see Nick the Stripper rugby tackled to the ground by a woman on roller skates then this is the one for you.

Doing less well as Nirvana toured just before they released Nevermind was yours truly sat at the bottom of the stairs that led down into what was then Leeds Polytechnic auditorium with a particularly nasty case of man flu. I was soon terrorised by a member of L7 who I seem to remember was bassist Jennifer Finch sliding down the flat surface that ran alongside the stairs and under the school chair like contraption I was sat on. After enduring a couple of descents to show I was in on the joke I slunk off to find my own safe space and snot all down the back of somebody’s flannel shirt.

Behind the goofing around is a fierce intellect and some sort of lineage is revealed by the band calling on prospective drummer Demetra Plakas when she was listening to Patti Smith’s Radio Ethiopia. An anecdote which almost sounds too good to be true but who cares. I’m not sure where we’re at with the referring to of a bands gender but can see the problem. It would be ridiculous to prefix Nirvana with male band but ignoring that L7 are women would be as pointless so I won’t.

There is no ducking the tampon chucking at Reading Festival but it was the appearance on post piss up The Word that provoked the most prurient interest. Admittedly not usually on TV but men from Iggy to Lux Interior had given it all an airing since time began, but much like that Slits cover this wasn’t how women were supposed to get naked. You won’t be looking long as despite the single Pretend We’re Dead charting on both sides of the Atlantic it’s tellingly the first thing that comes up on an L7 internet search. For anyone other than the most repressed Daily Express reader the mischievous glint in vocalist and guitarist Donita Sparks eyes just before or the drum kit demolition straight after will be of more note.

Last year War On Women highlighted the old boys network that is the Warped tour so it is sad to note that L7 were doing this in the last century. If they do release a new album though I wouldn’t be expecting a workbook as L7 seemed less about academic feminism than demonstrating there was nothing peculiarly male about over the top rock. Working with the wonderful John Waters on Serial Mom and being told he didn’t care what they did as long as it was called Gas Chamber appealing to Sparks’ Rock ‘n’ Roll Swindle school of provocation no end. Freaking out Tommy Lee in ’93 by responding to Motley Crue’s centre fold obsession with a revolving tape of erect penises in their next door studio. When a promoter groped Sparks their direct action meant peeing in his hat.

There is some serious shade to go with the light towards the end of the film as the lifestyle catches up with a roadie who dies and a band who collapse under the weight of industry pressure. Ultimately then they might not have blown the bloody doors off patriarchy but they certainly wedged a Doc Marten in it. The bonus of blokes releasing their stranglehold for ambient remixes and long lens fiddling making it even more apparent at the likes of Great Escape how many women were able to fuck guitar shit up the best. For a high octane hour and a half hours of pretty much everything that matters Pretend We’re Dead is second to none. The comeback and single Dispatch from Mar-a-Lago released after the election of Agent Orange to the White House could not be more timely. Have you seen him wearing a hat recently?