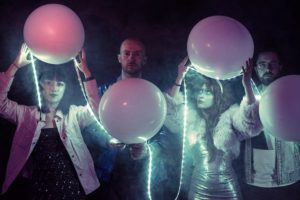 The enduring gift of Air’s critically acclaimed debut album Moon Safari in 1998 was the wave of subtle dream-pop bands which emanated from the French duo’s quintessential electronic prototype. Twenty years later and that preliminary mirage has become a palpable verity in the electronic gospel concocted by Central Scotland four-piece L-space (short for Library-space).

Barely yet band-toddlers, the 2-boy/2-girl makeup have already had their debut EP Sol 0 rated among the very best EPs of 2017, and signed with nascent record label Last Night from Glasgow (LNfG) who expect to release their debut album in September 2018. Premiering what can be expected, the opening single Suneaters homogenizes silken organs, engaging synths, and the fragile but elegant vocals of front-woman Lily Higham, generously propelled by guitarist Gordon Johnstone. Only the primitive beat tempo skimming beneath the song appears superfluous as Dickson Telfer’s scuzz-bass and Maura Keane’s synthesised echoes are enough sorcery for a truly enchanting piece of work.

Comprising of a poet, a literary editor and an author within their ranks, L-space will unquestionably have a lot to say over the coming months and years ahead. This isn’t to say that there is a highbrow tact being adopted by the band, but rather that sentiment and opinion are welcoming features of a group who have already proven ebullient and fun as a live spectacle with their illuminated umbrellas, face-glitter, and bubble wands. All this would be facetious if the group never had the songs to back the playfulness, but with an apparent substantial musicianship, defined ambition, and a capacity to enjoy the moment, what follows in 2018 may well plant an L-space flag on that moon which Air were so eager to visit two decades previously.

Suneaters will be the first L-space single released by Last Night from Glasgow on 2 March 2018. The band will be performing alongside label mates and Britpop-cult favourites Bis at LNFG’s Bigger Birthday Bash in Stereo, Glasgow on 31 March 2018. The single was premiered on Vic Galloway’s show on BBC Radio Scotland on 12 February 2018 and for the first opportunity to view the video for the single, watch  below.

L-space band can be found at their website here