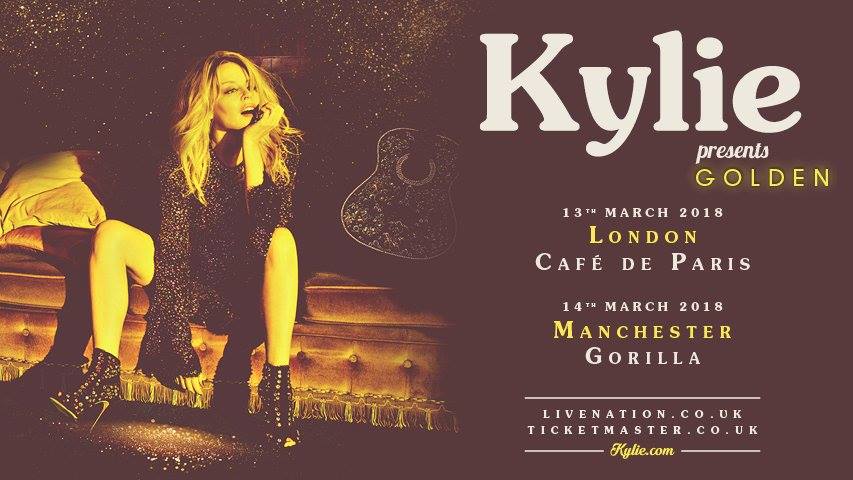 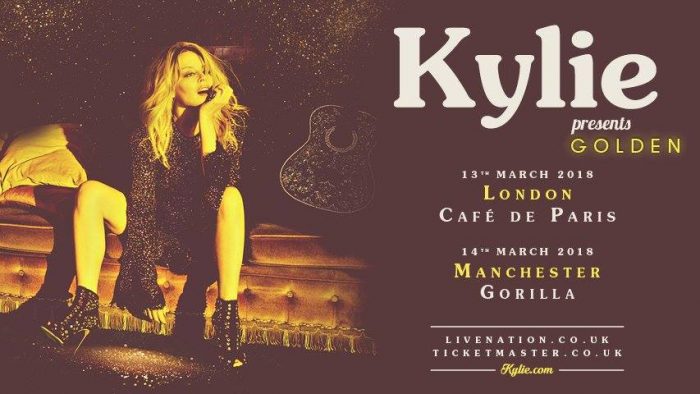 Kylie Minogue Superfan Martin Mathews was one of just 550 lucky enough to attend an intimate live show at Manchester’s Gorilla. It’s safe to say that for Martin the 14th March 2018 was better than Christmas Day! The experience left him speechless, but he did manage to write the following review for Louder Than War…

It’s no secret that I am a huge Kylie fan and have been for 30 years. During that time we have witnessed Kylie evolve from the squeaky clean girl next door soap star, then morph into a bubblegum pop star, onto sex kitten, dance diva and indie kid, before returning to her pop roots. 2018 sees yet another incarnation as Kylie prepares to release her 14th studio album “Golden”. The album was written and recorded by Kylie in Nashville and much has been made of her going country, (it has also divided some fans with her change of direction). Kylie describes the music as “Dolly Parton on the dance floor”. The album is due for release on 6th April and Kylie is playing 5 intimate dates in the UK and Europe to promote her new tunes.

As someone who is used to seeing Kylie play arenas with all the accompanying glitz and razzamatazz the chance to be attending her intimate stripped back showcase  of the new album was not to be missed. From my arrival at the venue early doors it was apparent that this was indeed something quite special, the queuing fans were all waiting excitedly to be let in when the doors opened at 7.30pm, one fan had been queueing since 10am.

Inside the venue, the stage was dressed with a red velvet curtain, a giant love heart and an illuminated K,  just after 9pm the show commenced as 5 piece band and two backing vocalists took to the stage. “Golden” the title track of the new album opened the show to the most incredible roar of approval from the audience as Kylie in double denim, took to the stage. The song sounds like it’s a future Kylie classic, very much pop as you would expect, but heavily country influenced. “One Last Kiss” and “Raining Glitter” followed in a similar vein, before Kylie took some time to address the audience telling them “I always try to prepare myself for Manchester, but I just can’t you are amazing”. She went on to say that in addition to the new songs she wanted to perform some fan favourites that aren’t normally included on her tours. At this point someone shouted from the audience and Kylie launched into an impromptu rendition of “Especially For You” with the crowd all singing along. “Breathe” and “Put Yourself in My Place” from her 1997 and 1994 albums followed before another new song “Shelby ‘68” which she dedicated to her Father.

The new songs are all written by Kylie, very personal with a lyrical depth not always associated with her music and she seemed to be really enjoying sharing these with us. Referencing Nashville Kylie and her guitarist Big Luke then covered “Islands in the Stream” which was again met with a huge roar of approval. 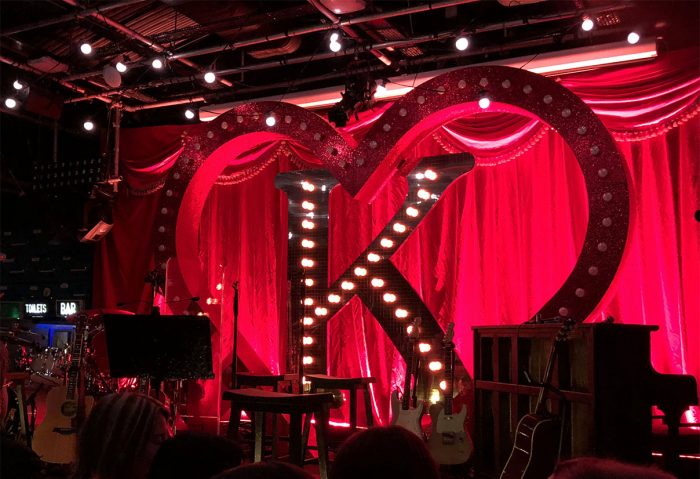 Classic songs from her back catalogue “The One”, “Hand on Your Heart” and “All the Lovers” were performed before she told us that the night was coming to an end, the audience responded to this with playful booing. The current single “Stop Me From Falling” followed with the audience again singing along before Kylie left the stage briefly. Returning moments later in a denim jacket with a big sparkly golden K on the back there was a further two songs from the new album “Sincerely Yours” which was dedicated to the fans and the lead single from the album “Dancing” which closed the show.

The atmosphere in the venue was electric and most of the audience like me were clearly hard core long time fans, eager to hear Kylie’s new music. For me this new direction is very welcome and from what I heard tonight I would say that this is a career defining album. There were no dancers, no elaborate costumes, (although there was still plenty of glitter) this was Kylie stripped back and intimate but being true to herself and her fans, vocally flawless and clearly loving every moment of this show just as much as the fans were.