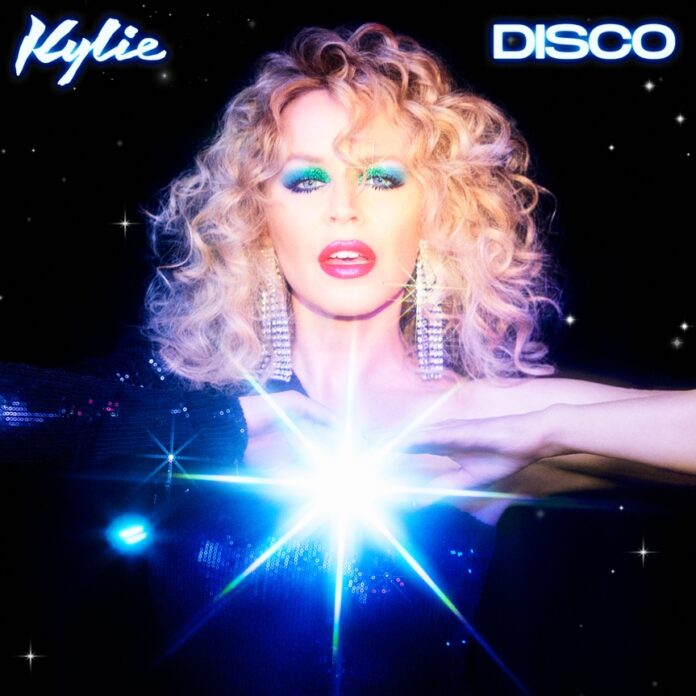 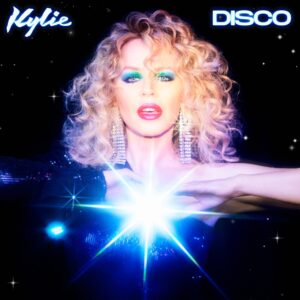 It’s no secret since 1987 I have been a huge Kylie fan. Therefore, I consider myself to be lucky, lucky, lucky to be reviewing her forthcoming, much anticipated 15th studio album ‘DISCO’ ahead of its worldwide release on 6th November 2020.

Much has been said about the recording of this album which is the follow up to her 2018 number one country-influenced album ‘Golden’. A lot of this album was written and recorded during Lockdown with Kylie creating a recording studio in the lounge of her London home, as well as utilising video calls to learn how to record and master her vocals, so much so that she not only has writing credits on all the tracks on this album she also has an engineers credit too. I was overjoyed when it was announced that Kylie would be releasing a new album this year and being called ‘DISCO’ it seemed that Kylie was coming to save us from 2020.

The first single from the album ‘Say Something’ was released in July with a premiere on Radio 2’s breakfast show. An obvious choice for a lead single due to the lyrical content of the song, which was written last year before the pandemic took hold, but seems perfectly appropriate as Kylie sings “love is love, it never ends can we all be as one again”. 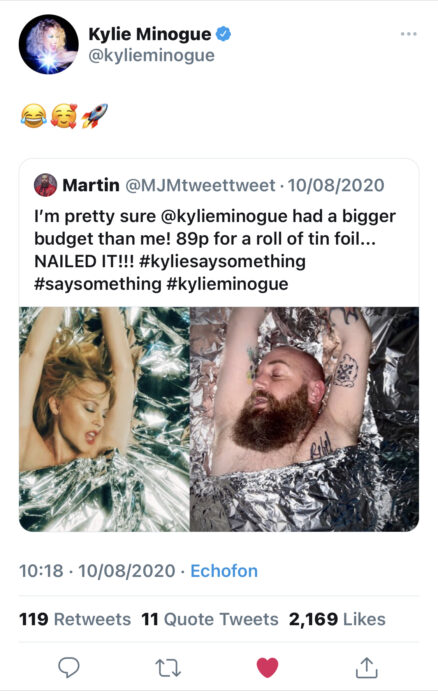 This song as described by Kylie herself as “galactic disco” is a pulsating electro-pop dance song with soaring vocals, emotive lyrics and a choir. The accompanying video directed by Sophie Muller sees Kylie riding a giant golden horse in a nod to Bianca Jagger famously arriving at the legendary disco club Studio 54 on horseback back in the 1970s. Kylie said in 1998 at the time of her ‘Intimate and Live’ tour “if in doubt apply more glitter” clearly this concept was applied to the spectacular video. A photograph of me (see here) recreating a scene from this video was retweeted by Kylie herself!

The second single released ‘Magic’ the album’s opening track, is a more traditional disco sounding song, more in line with what people were expecting Kylie’s version of disco to be, it is a funky and uptempo song, which instantly reminds me of both ‘Cherish’ by Kool and the gang, as well as the theme music from ‘Hill Street Blues’ this is classic Kylie with her practically purring “Do you believe in magic”. Another dazzling video directed by Sophie Muller.

To give everyone a further taste of what to expect from ‘DISCO’ Kylie released a third song ‘I love it’ ahead of the album’s release, as well as teasing fans by revealing the tracklist on social media, including sending song titles by direct message to some fans – sadly I wasn’t one of those lucky fans!

So, what can we expect from ‘DISCO’? Well, its clear from the singles that this is not just a paint by numbers disco pastiche, there is a lot of influence from the classic disco sounds of the 70s and 80s as well as current music, this is Kylie’s interpretation of disco. The influences I hear include Giorgio Moroder, Nile Rodgers, ABBA, The Jackson’s and Donna Summer, as well as a nod to fellow Australian Olivia Newton-John.

‘Magic’ – the second single a great opener to the album, welcome to Kylie’s disco…’Miss A Thing’ – is a more sultry and slinky groove with lower, breathy vocals and double handclaps galore “dance, dance, dance like no one is watching” this is a call to the dance floor for anyone not already there. ‘Real Groove’ – rumoured to be the next single, showing the album’s diversity, sexy and sassy with a slightly funky R ‘n’ B feel, more handclaps and vocoder backing vocals. Lyrically this is Kylie saying “look at what you could have won” to some foolish fella who let her go.

‘Monday Blues’ – my least favourite on the album, its an uptempo poppy song celebrating the weekend, it’s not terrible, I just don’t love it. ‘Supernova’ – now we are really getting going, this is one of the album’s standout tracks. A thoroughly modern-sounding dance song with strong confident vocals and galactic lyrics as the title suggests, with a reference to her 2000 album ‘Light Years’, this is I am sure a future Kylie classic and destined to be a fan favourite. ‘Say Something’ – as discussed above the first single from the album, is one of my favourite Kylie singles, classic Kylie.

‘Last Chance’- one of the songs that I instantly loved on hearing it, reminding me of ABBA’s ‘Voulez Vous’ a very strong, very danceable disco song. Could anyone other than Mary Poppins and Kylie use superfragicalalistic in a song? ‘I Love It’ melancholy lyrics set to a catchy dance backing track with great horns, easy to understand why this track was released to showcase ‘DISCO’ it’s not the best track on the album, but still a great song. ‘Where Does the DJ Go?’ starts slowly like a Donna Summer song, this soon literally explodes, this is Kylie at her best with a ridiculously catchy chorus, that I literally can’t get out of my head! There is also a nice lyrical reference to ‘I will survive’.

‘Dance Floor Darling’ – my absolute favourite song on the album, another thoroughly modern-sounding song, more great vocals building to a great big chorus, before Kylie asks “what you waiting for?” before the tempo shifts and the song goes off like a box of frogs, this song left me a sweaty mess, I love it! ‘Unstoppable’ – if this isn’t a single then there is no justice in the world. Reminiscent of The Jacksons this is just a great song.

‘Celebrate You’ – a fitting end to the album. The perfect end of the night song, a slower tempo with a big rousing chorus, if I ever get married (open to offers if anyone is interested…) this would be a song I’d want played. I admit I shed a tear listening to this, I imagine this will be a highlight of future Kylie live shows, it is, in essence, a love song, but to me sounds like a love song from Kylie to her fans similar to ‘Sincerely yours’ from the ‘Golden’ album.

So in conclusion, ‘DISCO’ is exactly what the world needs from Kylie in 2020, pure escapism and joy. Don’t be expecting it to be a personal or deep album it is very upbeat, very disco. I haven’t stopped dancing or smiling since listening to it, this is the Kylie album that will make her fans very happy. Kylie sounds better than ever on this album, the songs are all very well produced and sound fresh and familiar at the same time. And yes I am a huge fan of Kylie but I don’t just blindly love everything she does I am critical when I needs to be, after all, we’ve grown up together, but I don’t have anything negative to say about ‘DISCO’. On ‘Where does the DJ go’ – Kylie sings “The world’s trying to break me I need you to save me” a lyric that sums up exactly how I feel.

Kylie is releasing ‘DISCO’ on CD, Deluxe CD with four bonus tracks, cassette and four different coloured vinyls, as well as digitally. If ‘DISCO’ makes it to number one, which it deserves to, it will mean Kylie has had number one albums in five consecutive decades, no mean feat for someone who was initially dismissed as a one-hit wonder back in the ’80s.

Whilst discos around the world remain closed due to the ongoing pandemic this album will enable us all to have our very own disco at home, be that in the kitchen or lounge or wherever, push the furniture out of the way dust off the mirrorball grab a glass of Kylie’s own range of wine and “dance, dance, dance like no one is watching”.

December 4, 2020 0
The Music Managers Forum (MMF) and Featured Artists Coalition (FAC) have written to PRS for Music, the UK performance rights organisation, to protest a proposed new tariff for livestreamed concerts, which the associations criticise as “unworkable” and punitive to artists.
Read more