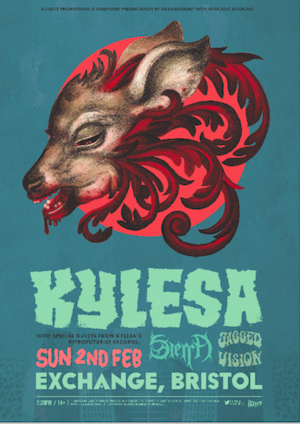 Last year saw the release of Kylesa’s sixth album, Ultraviolet. The album gained very favorable reviews in the press, displaying a band well into their stride and unafraid to explore whatever genre they feel will allow them growth. The range of their stylistic influences has been impressive and bold, traversing Hardcore, Punk and Doom Metal with lashings of Psychedelia as their album before last, Spiral Shadow so artfully displayed.

Tonight we find Kylesa deep into a month long European tour and with a full house at the Exchange, the crowd is excited. When we see drummers Carl McGinley & Eric Hernandez limbering up the powerful rhythm section that adds such ferociousness to the music it’s hard to keep my heart from jumping out my chest.

New tracks like Unspoken with its melodic hooks and soaring chorus sit well beside older favourites; the decidedly punk rock slabs Scapegoat and Hollow Severer. It’s a damn shame that the mosh pits of old seem to be no more, as the vibe in the room is incredible as they play one of the tightest, most dynamic sets I have seen them play. We, as an audience have  lost the art of abandon, in favor of the visual stimulus, instead of a visceral one that means getting down and smelly with each other’s sweat.

Nonetheless, everyone does seem enthralled by the music Kylesa produce so distinctively. Tired Climb and Bottom Line thrash to and fro, taking us down the darker, more hardcore alleys of this set. Upping the intensity comes with the territory with these guys. Guitarists, Laura Pleasants’ and Philip Cope’s consummate riffing and Chase Rudeseal’s foundational bass playing are awesome, not to mention that they fracture my eardrums in the process. This band’s heaviness is only matched by their desire to inject more accessibility into their music, and they are unstoppable.

New track Long Gone sounds epic, an exceptional addition to their repertoire and a diversion from their solid heavy roots and pedigree but We’re Taking This confirms their dedication to their original sound with it’s heavier than heavy riffing. They are one exceptional band with an extraordinary range of abilities. Yes, it seems they are an unstoppable force.