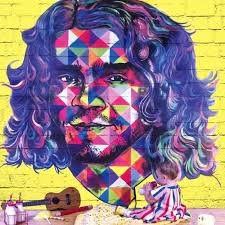 After spending time in rehab in Thailand and embracing fatherhood, The View frontman returns in good form with a summery pop vibe on his debut album.

A raw and brutally honest collection of songs, much of ‘No Thank You’ finds Falconer exploring a tumultuous time in his life. The majority of the songs cover a period which commenced when he entered rehab in the summer of 2016, right through to the present day where he’s now embracing a new life and outlook as a father. The album title was allegedly gonna be nicked by Liam Gallagher when they were both listening to an early mix when they met in Phuket during his rehab times.

This album to me comes across as a folk pop concept album as the lyrics describe a journey through rehab, coming out through the other end and the trials and tribulations of being a father, and where he’s at now with his head cleared after the wild years. Poor Me has traces of Jake Bugg in there and has a anthemic chorus which lifts the mantra from Alcoholics Anonymous meetings ‘Poor me, poor me, pour me another drink’ to great effect. Kelly is a lovely mellow number and a well written kind of love song.  Avalanche is well executed and that familiar Scottish brogue we all know oozes out from him. The Therapist continues with his story of rehab as does Japanese Girl which is possibly an ode to his rehab team. Confusion could have written by Rod Stewart and the strings go well with Falconers melodies. Family Tree is probably the poppiest thing on here and a surefire hit in the right hands with it’s addictive chorus. Jekyll Down Your Hyde is the closest thing to The View you’re gonna here, but this is about Falconer not the band and there’s bound to be some of that old band stuff still lurking in his head. Stand Out Track for me is Madonna’s Makeup which has excellent tinges of Idlewild / Roddy Woomble going on and lyrics which I interpret to be a party up in heaven with Marilyn, Michael, and Brando teaching our host in the arts of their talents. The ending tracks Lily Anne and Last Bus Home bring out his love of The Eagles and Bonnie Raitt as he goes all country on us to close the album.

This is a very well written debut by Falconer and well worth a listen as he is telling an autobiographal tale set to a soundtrack he’s written and recorded himself (except drums) and should be a winner.