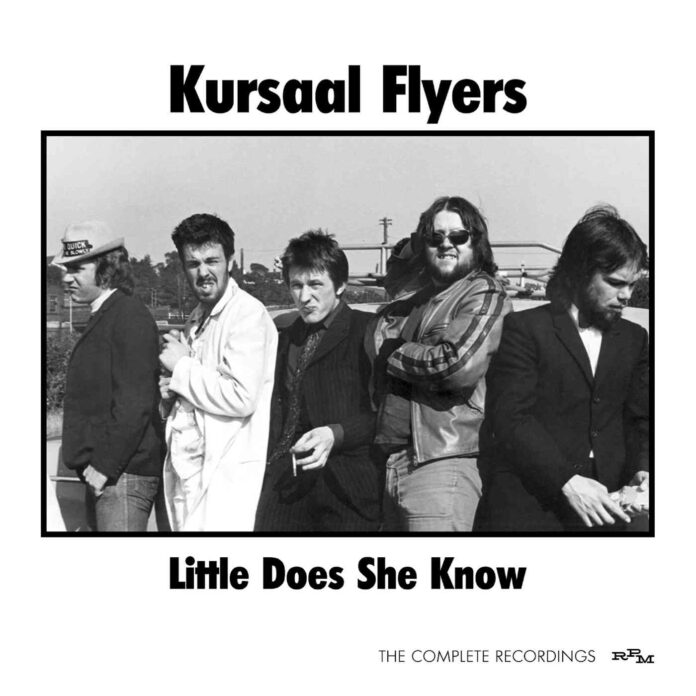 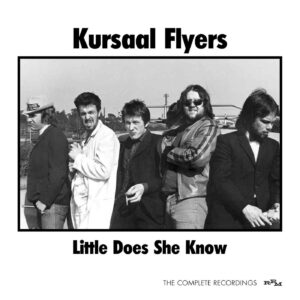 Kursaal Flyers: Little Does She Know

Long overdue compedium of seventies one hit wonders shows that their albums are ripe for rediscovery. Louder Than War’s Craig Chaligne reviews.

Benifiting from their association with Dr Feelgood, Kursaal Flyers appeared on the London pub-rock scene in 1974. The band quickly built a reputation as a colourful live act and were quickly snapped by pop mogul Jonathan King (who had also discovered 10CC) who signed them to his label UK Records for which they recorded their two albums “Chocs Away !” and “The Great Artiste”. In the liner notes, drummer and lyricist (and now renowned rock writer) Will Birch says that the band’s performances on their debut album suffered from their lack of studio experience but this doesn’t particularly jump out when you listen to it, the songs are well performed with good harmonies and good playing and Paul Shuttleworth already proves he is great at many vocal styles. “Pocket Money” and “Hit Records”, both catchy songs start the proceedings on an upbeat note with a groovy soulful mood. The band’s goofy side comes to the fore on “Kung Fu” while “Tennessee” and the hoedown instrumental “Chocs Away” see them wearing their country influences on their sleeves. Graeme Douglas really outdoes himself on the tuneful “Brakeman” with some excellent guitar parts, a feat which he repeats on the outro to “Speedway”. The tearjerker “Now I’m Back” and the country shuffle “Yellow Sox” might be a little formulaic but the ballad “Silver Wings” with Vic Collins in full Red Rhodes mode and a spirited take on Legend’s “Cross Country” close off this spirited debut in style.

On “The Great Artiste” also released in 1975 like its predecessor, the band refines their sound and their approach. The excellent “Ugly Guys” where Paul Shuttleworth pulls one of his many great vocal performances is followed by the tongue in cheek “The Great Artiste”. “Fall Like The Rain” sees them enhancing their sound with some horns and the intro to “Cruisin’ For Love” cleverly puts together banjo and synthesizer. If the band covered Legend with gusto on “Chocs Away”, here they manage to pen what could easily pass for a Jupp original with the rocking “Back To The Book”. The latino send-up “Palais de Danse” is a pleasant ditty which sounds a bit funny sandwiched between two of the albums rockier tracks (“Back To The Book” and “Pain and Misery”). The gloomy “Hypocondriac” is a distant cousin to Elvis Costello’s “Watching The Detectives” and is funnily followed by a composition by the man who would produce Costello’s masterpiece :”Television” by Nick Lowe. Another shift in style for the coda is the finger snapping “Drinking Alone” complete with nightclub ambiance sound effects.

After being let go by UK records, the band signed with CBS and started recording a new LP with Mike Batt. The record would turn out to be their fullest sounding yet but clashes between Mike Batt and Graeme Douglas during the recording would ultimately lead to Douglas’s departure in early 1977. When looking at the writing credits, you can spot that the Birch/Douglas axis that provided most of the material on the first two albums was now being seriously challenged by Paul Shuttleworth and Vic Collins. The album favours a poppier approach and puts Shuttleworth front and center in the mix. The album starts with THE hit, “Little Does She Know” where Batt’s skills as an arranger certainly are put to good use with swooping strings, horns and even gun shots (he certainly followed the brief described by Will Birch in the liner notes !), a deserved hit for the band but a song that wasn’t very representative of their other work. We are back in more familiar territory with “One Arm Bandit” which rocks with aplomb and puts to good use the duelling guitar/pedal steel of Graeme Douglas and Vic Collins. The bluesy “Drinking Socially” is a clever answer to “Drinking Alone” and the melodic “Two Left Feet” could have been another single but might have been a bit too similar in style to “Little Does She Know”. On “Modern Lovers”, the band moves into more classic guitar pop (a direction that Birch would follow in his post Kursaals outfit The Records) with a song displaying a really catchy chorus. “Street Of The Music” sees horns put to good use again with some female backing vocals enhancing an already great vocal performance by Paul Shuttleworth and the anthemic “Radio Romance” proves to be one of the album’s highlights. The bluesy “When The Band’s On The Stand” meanders a little but the sprightly “Detroit Tin” is a quality track. The two last songs (“Third Finger Left Hand” and “Ready To Go”) see them return to their country roots with success. An excellent album with lots of different musical styles. Some great bonus tracks complete the original LP, the catchy “Girl Talk”, the B-side to “Little Does She Know” and an unreleased track called “The Questionnaire” which another fine string arrangement. Of particular interest is “Revolver” that definetely sees them head in a harder direction not too dissimilar to the one ploughed by their mentors Dr Feelgood, a fine B-side to the melodic “The Sky’s Falling In Our Love”.

After Graeme Douglas left to join Eddie and the Hot Rods, he was replaced by fellow Southend musician Barry Martin. The tour following the release of “Golden Mile” was captured by the legendary producer Vic Maille at London’s Marquee and remains an excellent memento of the band’s high energy live act. They manage to transpose the “wall of sound” of their hit in a live setting but mostly avoid their latest LP. Starting with a blistering new song titled “Original Model” written by Will Birch. The album closes off on a blistering beat medley mixing Mike Berry’s “On My Mind”, Arthur Alexander’s “Anna (Go To Him)” and The Easybeats’s “Friday On My Mind”. The bonus tracks include four unreleased songs for the aborted “Mods and Rockers” albums which show the band trying (and succeeding) in coming up with a harder sound. Unfortunately the departure of Vic Collins (to perfect his pedal steel playing) and Paul Shuttleworth (to record a solo record)  put an end to the proceedings.

The general feeling amongst the ranks was that they had had a good run and they all moved to greener pastures. Several line reunions occured over the years and in 1987 the original line-up reunited to record a new album “A Former Tour de Force Is Forced to Tour”. A different kind of beast from their three previous studio efforts, it is a suprisingly commercial collection of songs that avoids the sonic trappings of the time (no echoey drums, no cheesy synths). The Birch/Douglas axis is back on force with eight songs out of the ten credited to them. The songs have a harder rocking edge but the country rock heart of the band stills beats strong as proved by the gentle “Tonight Before Tonight” and the title track. The great opening track “If You Only Talk To Me (Like You Talk To The Dog)” and the catchy “Luxury Lane” are both great songs. If people like the sound of that album, they would be highly advised to check out the Ugly Guys, the band where Vic Collins and Paul Shuttleworth currently play. A further round of bonuses complete the original LP including two takes of a countryfied version of “Route 66”.

More info on Kursaal Flyers can be found at their official Facebook page.