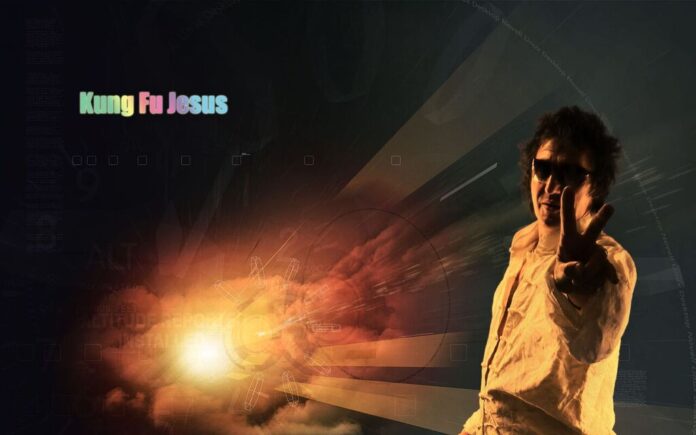 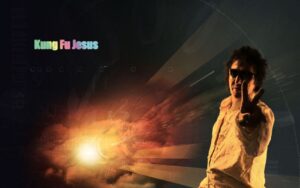 Originating from The Shire in Scotland, self named Kung Fu Jesus is probably one of the strangest, yet  wisest musical prophets I have ever interviewed. His songs are fun, with tricky, courageous lyrics, spiritual effects, and eclectic messages. Having been featured in Emmy winning documentaries and radio play on the BBC, Kung Fu Jesus is well on his way to making an impact on today’s pop scene.

Louder Than War: I feel like you create visions and revelations. Can you talk about your inspirations and motivations in writing the songs: “God of Thunder”, “Rainbow Road”, and “Fenris Wolf”?

Kung Fu Jesus: The 3 songs are linked in inspiration. It all started after a holiday with Keiran Allan. After a day he started going a bit mental and channelling all this information of his spiritual self being a wolf who had been trapped on the moon watching the atrocities on planet Earth for at least a couple of thousand years. He said this was his first time on Earth and he had used the Celestial Gold symbol to get himself here. something to do with using the light to get here. He explained the symbol and said I was the blue jewel(little boy blue and the man on the moon lol). The universe then started to show me signs of who I was, my suitcase had the word ‘revelations’ on it and the microwave in the apartment was made by a company called “Thor” haha. I couldn’t believe it, here was Keiran Allan saying he was The Fenris Wolf talking about biting the head off of Odin The All Father(Satan), the universe telling me I was Thor the God of Thunder through a microwave and a suitcase and all this crazy info about the war between light and dark through Keirans constant channeling. When I got home I had a bit of a breakdown and climbed the local mountain Tinto shouting for God back. When I returned to my abode God appeared in the clouds(oor da Ra) along with Bruce Lee and a couple of others and I began my relationship with God and was led on the path of the “Rainbow Road”.

I admire your courage in writing “Kurt Cobain”, what kind of feedback have you gotten from that?

Kung Fu Jesus: People who have commented on the track have really liked “Kurt Cobain”. To be fair the song isn’t anti-Kurt Cobain in the slightest, the guy was a musical genius and missed by the music world, the songs more an anti-suicide song, why kill yourself especially when you’re Kurt Cobain and writing some awesome songs! After watching a recent documentary however I’m really starting to question if he killed himself at all.

From first hearing your name Kung Fu Jesus, I originally thought you wrote religious songs….why did you select that name…actually it was an act of genius …

Kung Fu Jesus? haha. Well I wear Kung Fu suits and look like Jesus haha. Not that I know what he looked like, just the typical depiction of him. The name means more to me now though. My songs are spiritual and I’ve met God, not that you believe me or not but who would? It’s a bold claim. What I can tell you now is God is Love, I believe there’s some truth in religion but ultimately used to control and segregate man and always used as an excuse to go to war. God doesn’t want us to kill each other, end of. But he does want us to stand up against tyrants. I suppose the real Kung Fu Jesus is Bruce Lee, the Kung Fu enlightened one who used it to bring man together.

Are you or do you intend to tour in support of “Celestial Gold”?

Kung Fu Jesus: Yes I do intend to tour in support of Celestial Gold. I hope to reach the shores of America this coming summer and will be touring before hand in Europe.

Your style and genre seems to change with each song on the album. Do
you have a favorite type of music ?

Kung Fu Jesus: I love all types of music, really like my reggae and African music at the moment. The people who have the least seem to write the happiest music and they’ve definitely got the rhythm!!! I love world music in general and love to blend world music together.

What were your musical influences growing up?

Kung Fu Jesus: My musical influences as a youngster started with Oasis which got me into guitar music, their 1st 2 albums were good but lost faith in them after that. But they opened the door to old bands like Pink Floyd, The Doors, The Beach Boys, The Beatles, The Kinks, The Who, 13th Floor Elevators, King Crimson, Simon and Garfunkel, The Stone Roses, Joy Division. I really liked Kula Shaker in the early days, Blur and a few other Brit pop bands.

Is there any song on the album that has a particular message that you wish to talk about?

Kung Fu Jesus: I’d like to talk about “Rainbow Road”. The basic message is follow your heart, don’t let fear influence your destiny, follow the light down the Rainbow Road and find Celestial Gold(love) at the end of the Rainbow.

Can you explain ” St. Nicholas”, another act of song writing bravery I believe.

Kung Fu Jesus: Saint Nik is again linked to my meeting with God. I’ve also met Satan who can move from body to body. This started in 2012 when I went to a channeller with my ex-wife in Taiwan who said he was the red dragon (channeling his personality) and told me of a meeting I had with one of his spirits, a native american at Amsterdam train station who I believed to be Don Juan Matus from the Carlos Casteneda books. The channeller told me I was one of 5 dragons, he was the leader and my reason for being there was to meet him. Another body he channels through is somebody I know and yet another one is Aaron Bruno of Awolnation who writes songs from the perspective of Satan. This song is a response to “Hollow Moon Bad Wolf” which freaked me out when I heard it as it made way too much sense after what I had recently experienced, some of which I haven’t shared with you. The song is a message telling Satan to stop what he’s doing, God loves him and wants him to come home. The games over, we’re all sick of the pain and suffering now.

Do you have any future projects on the horizon?

Kung Fu Jesus: I am currently finishing my 2nd album with Rubber Taxi Records called “Smoke and Mirrors” which they hope to release late summer 2016. “Rainbow Road” is also going to be used for web TV show “We Don’t Hate Here” in the near future which should be good exposure for the song.

Kung Fu Jesus: In 10 years the Celestial Gold project will be in full effect changing the world for the better and everything will be in its right place, Bruce Lee will be back and Ra will be walking among us, the darkness will be defeated and it’ll be heaven on Earth.

Kung Fu Jesus is on the internet here.  He is also on Facebook and Tweets as @craigdoomsday