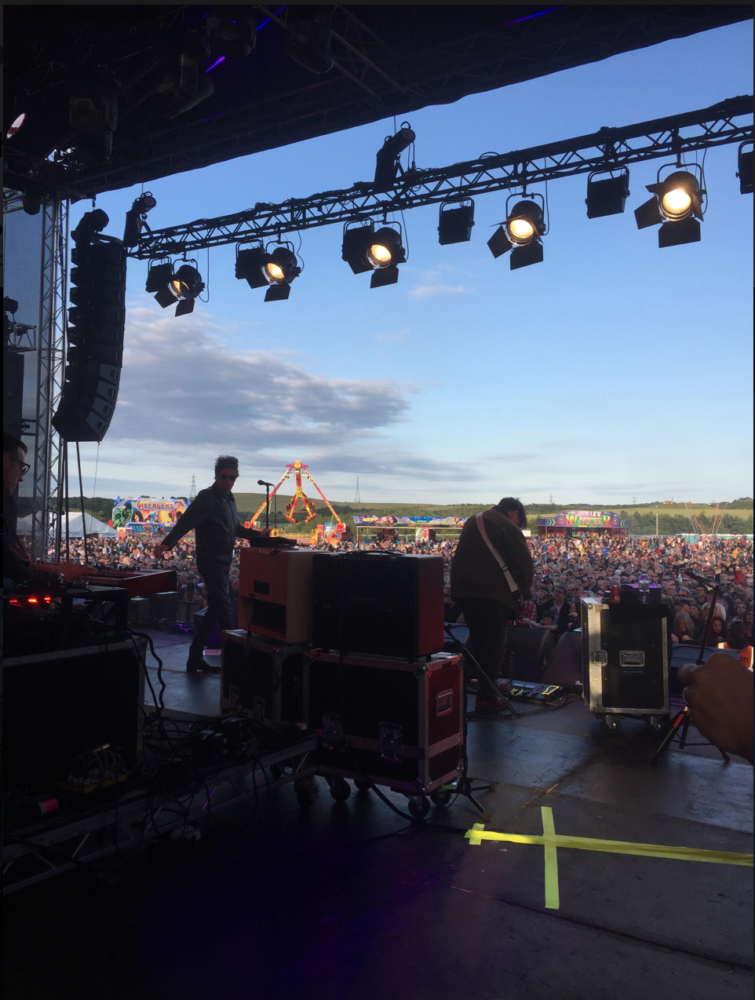 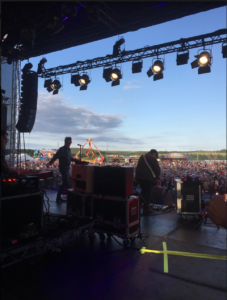 In its second year, Kubix festival held near Sunderland is booming.

9000 people came to the sold-out event that was built around a bill of post-punk survivors who have somehow endured the decades and are playing at the top of their various games. The backstage was a who’s who from the fallout of the punk wars and full of maverick bands who have defied the years and retained the cutting edge zing that makes this event really work.

Opening to an already packed field at midday, Big Country opened the affair with a perfect replication of the band’s patented bagpipe guitar sound. It’s the widescreen sound that made them one of the big players in the big landscape era of rock that saw U2 become the biggest band in the world.  Now built around key guitar player an co-writer of many of the band’s songs, Bruce Watson, they some summoned up the chiming twin guitar workouts to pay a perfect homage to the brilliance of the late bandleader Stuart Adamson.

The Alarm were also from the same era of huge widescreen songs that reached out from the claustrophobic British towns and somehow made sense in the wide landscapes of the USA. Frontman Mike Peters has been through the mill with his battles against cancer but his sheer optimism in the face of this imbues him with prime survival power and also fires his songs that are still brimful of innocence, belief and melody as prowls the stage like a busker with a huge PA and a heart of gold and a drummer, the legendary Pablo who played with Joe Strummer, providing an addictive rumble as the backdrop. Cast are the eternal ebullient Liverpool songsters who sprung out of the legendary La’s and in the height of Britpop sold a million records. Frontman John Power has been gifted with that Mersey talent off melody that rings through each song and you forget just how many melodies they were gifted with at their peak and they deliver a set full of hits with an effervescent energy.

Black Grape add a mutant funk bounce to the proceedings with an energised Kermit rapping at his buddy in crime and generational icon, Shaun Ryder, who defies his hip operation to deliver a tight and energetic set full of eccentricity and lyrical smarts. There is something genius about this band as they hit their wonk grooves and the musicians are killer – locking into gonzoid grooves with there bass pulling just about every booty swinging funk trick in the book.

Embrace have quietly remained hugely popular and their people’s anthems are, er, embraced by the thousands at the front. The melancholic big songs are put into a different context today with them sharing the stage with some of the widescreen bands of the past that opened the day.

The evening is ended by three bands who have each taken on some of the dark DNA of the Doors and created their own trips from the genetic information. Peter Hook and the Light thunder through their Joy Division and New Order set. Of course the JD songs sound magnificent and are all brooding and stripped to their core with the twin bass assault of Hooky and Yves Altona doing these classics justice. Hooky obviously has the perennial bass player problem of being able to sing and play the mighty 4 string at the same time and leaves Altona to hold the classic bass lines like the high neck curling brilliance of She’s Lost Control down whilst adding his bass weight when needed. It’s oddly effective and does these dark energy classics a real justice. Having seen Joy Division playback in 1979 it’s hard to imagine just how huge they have become, in the 21st century they are a ghost-like stadium band presence glowering over the heart and soul of rock music and their songs have become a massive part of our culture and soundtrack.

Echo And The Bunnymen shimmer with their quicksilver classics, the contrast between Ian McCulloch’s assured swagger Will Seargent’s withdrawn brilliance is the core of the band. As ever Mac is on great voice whilst the guitar player filled the songs with those pentatonic hooks that are the perfect embellishments. Killing Moon is always a golden card to play and its spectral beauty hangs in the festival air with Will’s perfect guitar line decorating Mac’s lush melodies.

The vocalist as ever on great form with his voice filling the field with its mournful classic beauty that defies gravity and lifestyle. The young bucks in the band knit together tightly to provide the perfect backdrop to the two post-punk vets creativity and the bands wistful and beautiful songs are given a juggernaut power that makes that hang in the evening air perfectly.

The Stranglers headline with a solid gold set of those strange yet brilliant singles and songs that dominated the punk era and made them, arguably, the most influential band of the period musically. This is a greatest hits set from the Stranglers which showcases their knack of never doing the same thing twice from the zigzag Egyptian reggae of Nice n Sleazy with what is perhaps the greats bass line of all time top the off-kilter waltz of Golden Brown to their eccentric bludgeoning brilliance of Walk On By to the anthemic No More Heroes – it’s always a joy to behold. The powerful songs pour out from the golden era but with an added vigour provided by the youthful Jim Macauley on drums who has added a pace and power the band. The new heavier Stranglers sees the classic bass ramped up and the set is a reminder of just inventive and brilliant this band was and still is with newer songs like Relentless and Unbroken slotting perfectly into the set. We were hoping for as the yet unrecorded Water to slip into there set but it was rested and ready to join the five new songs that have been demoed and the talk in the camp is about recording the new album. There is much life left in the band who are defying age creatively and physically as Alan McGee, who I’m sharing this gig with in the middle of the field agrees.