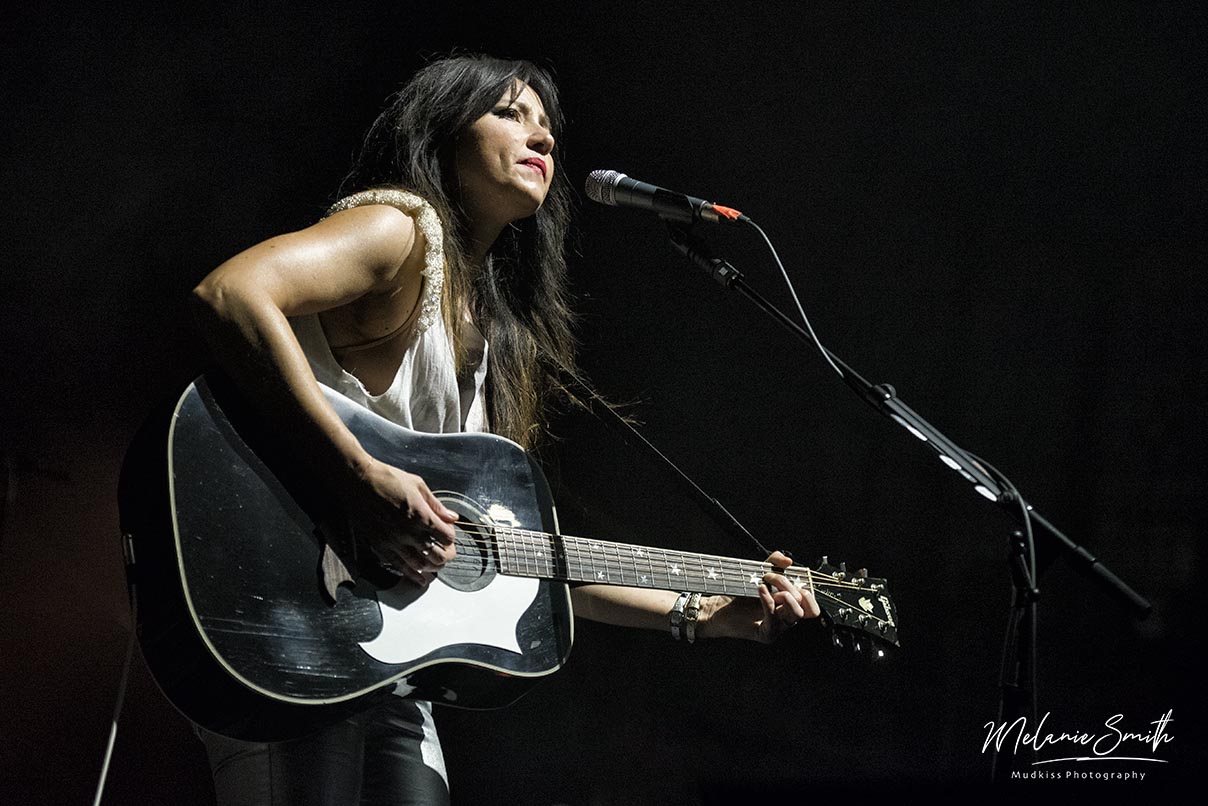 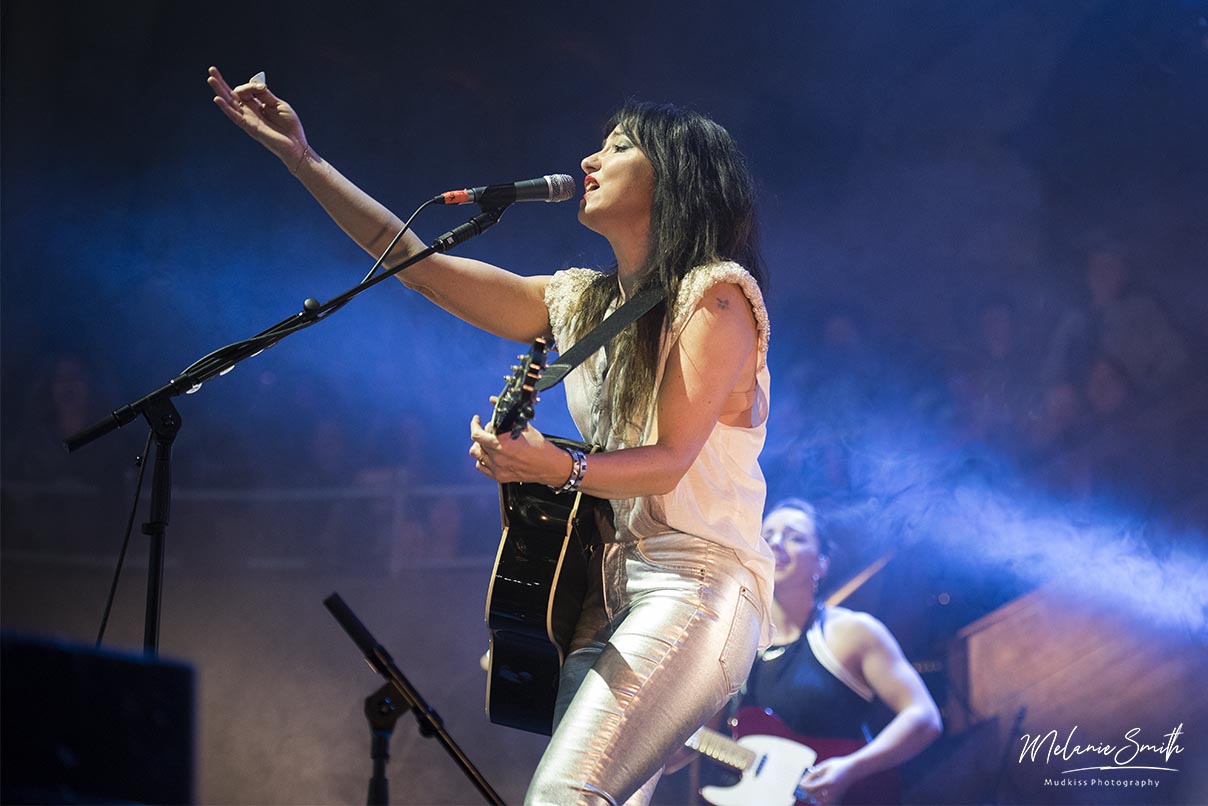 KT Tunstall rocked London with a heavier sound and one extra bollock. Louder Than War’s Andy Duke was there to take in the noise as the Grammy Award winning performer brought her Wax Tour to the capital.

“It’s like the new record has an extra ball”, says KT Tunstall before a capacity crowd at The Roundhouse in London. Referring to her formidable backing band and the sound of her latest release, Wax, Tunstall’s sonic onslaught certainly has more bollocks to it live. Or, at the very least, an extra bollock. But, thankfully, it’s not at the expense of melody.

Arriving onstage to the sounds of Toni Basil’s earworm Oh, Mickey, Tunstall asks if the audience are “ready to kick Monday up the arse” before starting her set with an incendiary version of In This Body. With her red Supro electric guitar delivering a crunchy yet percussive attack, Tunstall is well and truly summoning her inner rock chick with this opening number off her latest album. And it works. Thanks to her effortlessly powerful voice, the song’s catchy top line melody cuts through the bombastic band like a knife through haggis. And what a great backing band it is. But, for whatever it’s worth, I’m not going to ‘go there’ and address the gender make-up of the group. It’s 2019. The genitals of these fine musicians need not be a concern for anybody. Suffice it say that the band rocks and succeeds in delivering the boot to the very day of the week that The Bangles had an aversion to. 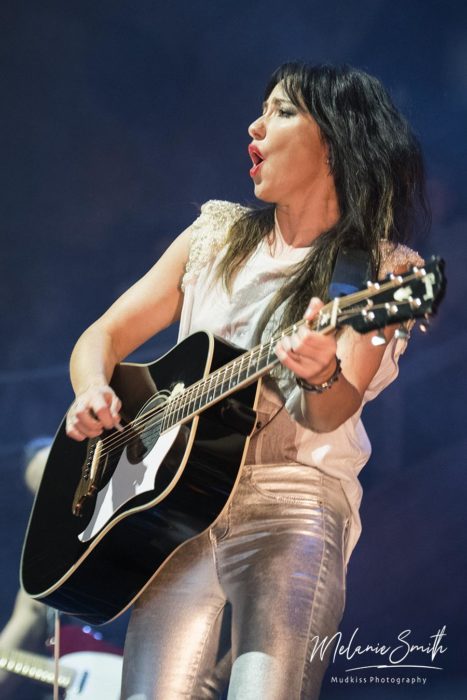 Switching to an acoustic guitar and dialling back the heaviness for Other Side Of The World, Tunstall manages to get virtually every member of the audience to dig out their phones and activate their torches in a modern reprise of the classic “swing your lighters” moment. And swing it they do. To say that the Scottish singer knows how to work a crowd would be an understatement. In fact, had her tremendous musical talent been overlooked by the industry – comedy is something that Tunstall could easily have fallen into as an alternative. From discussing the subtleties of dealing with jobbies on the tour bus to giving slice-of-life anecdotes about her travels that recalls Billy Connolly at his best, the diminutive singer is big on the laughs and humorous charm. VH1’s Storytellers should come out of hibernation if only to get Tunstall chatting and playing. Describing what a song is about is often awash with cheesy clichés at best and, more often than not, pretentiousness at worst. Tunstall bypasses these pitfalls by either keeping it simple or being funnily heartfelt. From describing Backlash & Vinegar as “a song about someone trying to keep you down” to asking the crowd if they’ve ever shagged someone who lives far away before comparing the fragility of long-distance relationships to a big ball of yarn in Red Thread – Tunstall is banter master. She even attempts to guess the names of audience members who shout out their love for her. “You must be Sarah!”. The shouty person wasn’t Sarah but kudos to Tunstall for the effort.

Having been a one-woman band for many years, KT Tunstall’s keen understanding of dynamics extends to her song’s arrangements within a full band setting. Hard Girls is a case in point. Featuring a sparse ‘drums and acoustic’ intro, the track eventually builds up into a feel that recalls a musical meeting between Joan Armatrading and Tom Petty. By the time the track reaches its apex, bassist Mandy Clarke (from Scottish ska band Bombskare) is hopping around the stage like a punk rocker just prior to drummer Cat Myers punctuating the dropdown with deftly delivered drums.

In addition to the tightly honed playing, there’s a sense of fun onstage that is absolutely contagious. There’s a lot of eye contact between Tunstall and her musical partners in crime throughout the set and even the band’s tech, named Devo, gets referenced onstage as the invaluable “stage janitor”. This sense of musical family is felt the most during the band’s excellent ‘unplugged’ portion of the show which also features a happy birthday sing-a-long for the ensemble’s bassist – complete with whiskeys being hand-delivered by Devo to the entire gang. The acoustic set ends with Ashes featuring the keyboard player on Melodica and, as it’s nearly Easter, donning pink bunny ears. For those gear geeks out there reading this review, I also feel duty bound to point out guitarist Hattie Moran’s impressive use of an E-Bow on her acoustic guitar during this stripped-down bit of the gig. Normally reserved for electric guitars, this handheld, battery powered device is used to generate infinite sustain reminiscent of a violin bow. In Moran’s hands, it provides subtle textures with a wee bit of a nod to the didgeridoo. 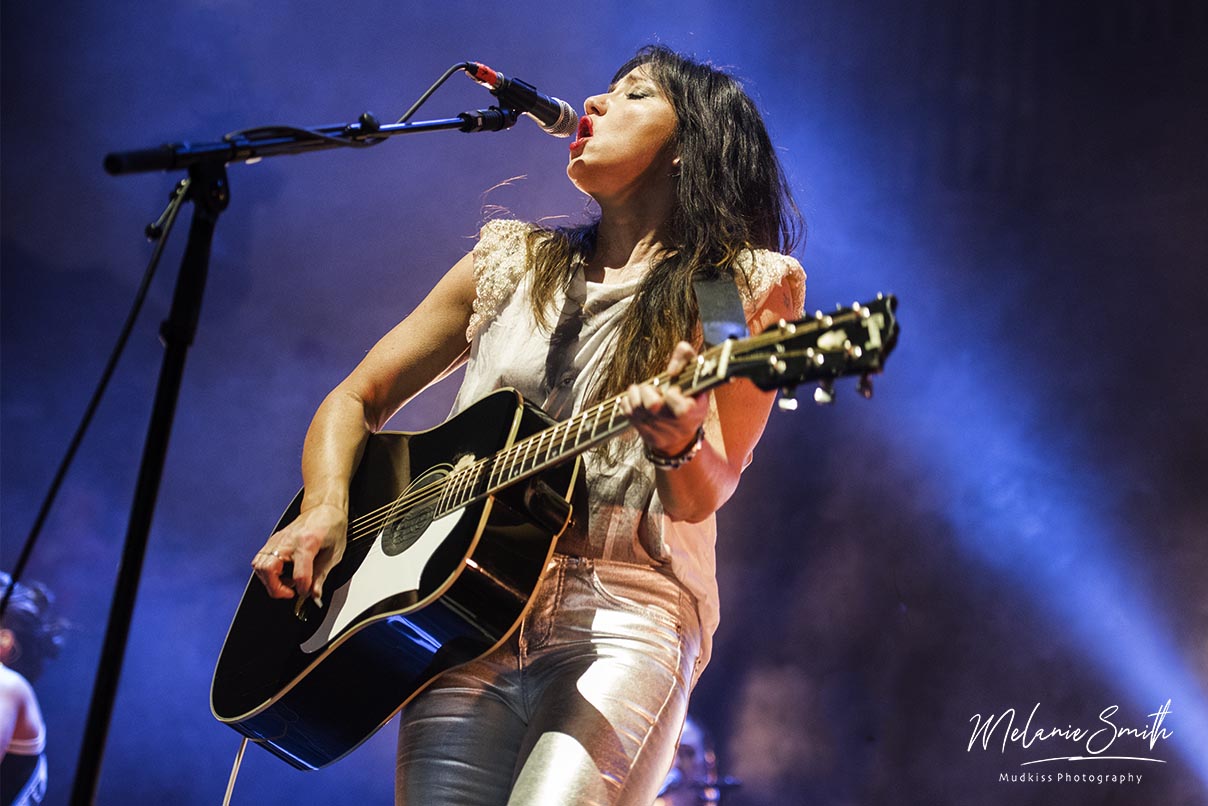 While her new material goes down incredibly well with the audience, the reaction to Black Horse And The Cherry Tree is met with almost deafening cheers. Describing the tune as a “big Jazzercise hit”, the singer initially struggles to get the first ‘banging her acoustic to make it sound like a kick drum’ sound working on her loop station. But Tunstall laughs off the initial misfire by saying “you can tell this is live!” before starting the track over again. The band eventually joins in on the number and the song is transformed into a bluesy mashup with the Edinburgh-born singer showcasing some impressive harmonica solos.

Highlights of the set include The River, anchored by Clarke’s prominent and tighter-than-cramp bass lines and Human Being with features some impressive fret frottaging from Moran on her candy apple red Telecaster. In addition, the emotive The Night That Bowie Died is a standout live offering from the new album.

The quintet end their set with The Healer. If the aforementioned ‘extra ball’ is a part of her band’s sound, this last track unapologetically is balls-to-the-wall from Tunstall and the gang. With Myers’ rapid fire floor tom hits and raunchy guitars aplenty, it’s no wonder that this energetic song has been used to finish KT Tunstall’s sets at festival gigs. The encore features a clever interpretation of Belinda Carlisle’s Heaven Is A Place On Earth that the former Go Go would be proud of before Tunstall rounds off the evening with Suddenly I See. 1700 fans immediately join in like Scots enthusiastically belting out Auld Lang Syne on New Year’s Eve.

Although now based in LA, the Grammy and Ivor Novello Award winning Tunstall remains a British institution and a force of nature as a live performer. In addition to being great musicians, Tunstall’s band have a great chemistry together and fill out the sound beautifully with strong backing vocals throughout the concert. Nearly half of tonight’s set came from Tunstall’s latest album, Wax, and it’s a testament to the strength of this release that the performance went down so well with the crowd.

KT Tunstall’s Wax album is out now. Click your way to iTunes to get a copy now.