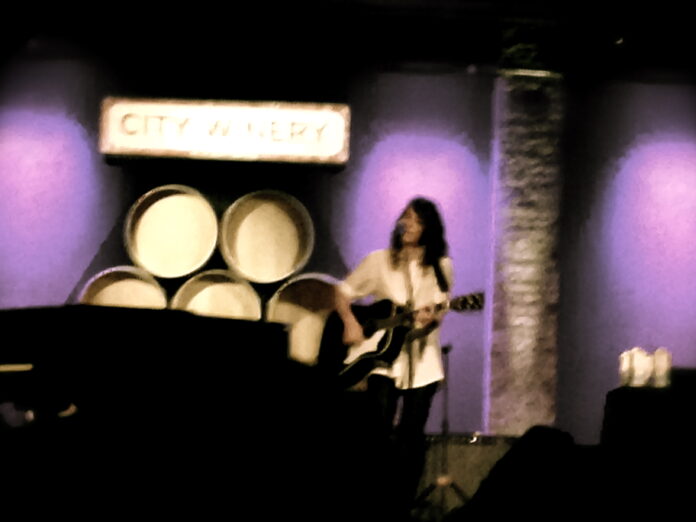 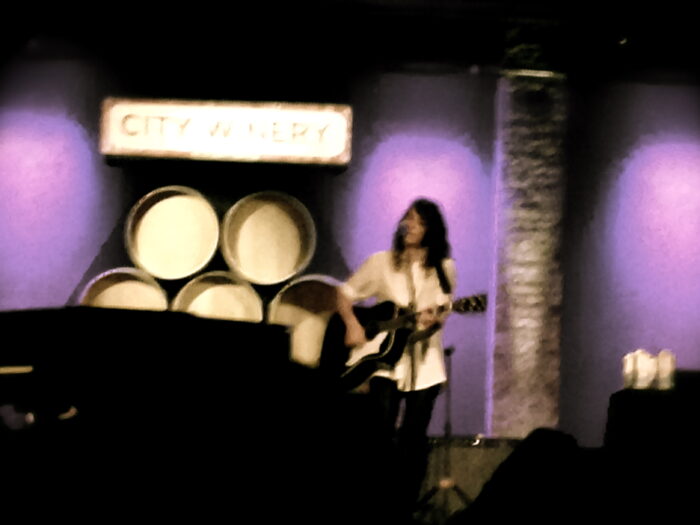 Our favourite Scottish songwriter has been snapped up by America’s City Winery chain to embark on a mini-tour of their hideouts. Louder Than War’s Clive K Hammond checked out her first night of the sold-out tour in the heart of New York’s Greenwich district.

Everybody has conventionally perceived Scottish born musician KT Tunstall to be a songwriter more aligned within the pop pin-up arena; a notion that once was perhaps fair. During her early career in 2004 it was difficult to move between radio stations without her hook laced, folk driven numbers filtering through; from Radio 1 to XFM, the world had become embroiled with her tender and private poetry and deep acoustic strumming.

Before we became infatuated with another singer-songwriter akin to building up a collage of sound through the use of cycling loop pedals and impromptu percussive tones in the form of Ed Sheeran, Tunstall had already made this format her own – a performance on ‘Later With Jools Holland’ showed it. There was an instinctive way in which Tunstall built her pieces to allow her tracks to blossom into colourful numbers that deflect away from the conceived concept of singer-songwriter. Much like her pieces, her career too moves from the Grammys to grief quickly – and it’s abundantly clear the effect the latter has had on her latest work.

And here before a sold-out City Winery in the heart of New York City Tunstall showcases a feature-length production of her career.

A City Winery is in essence a brand similar to that of Britain’s ‘Piano & Pitcher’. The bars are elegant places where the elite meet to eat, drink and be ripped off. But City Winery’s have a contrastive allure; they place artists in front of their guests whilst the festivities flow. The only way it can be described is as a contemporary jazz lounge, where candles decorate tables and barrels of home-brewed wine line the walls.

‘Invisible Empire’ began. A track that is typical Tunstall, it moves through from polite picking that bodies the platform for a delicate vocal to shine right across it to a hardened bridge where her beaten mind evolves resiliently back. ‘Scarlet Tulip’ was broken with subtly darkened imagery, it continued Tunstall’s evolution.

The way the room is set, the ambience should feel constricted. People occasionally muttering towards one another; the waiters clattering drinks over to your table; the jolting door allowing smokers to return and withdraw at will – none of this mattered. Tunstall remains as affable whether producing a sanguine, sun-enriched number or a desolate song about forlorn love. ‘Difficulty’ could have the room in tears. Aware, Tunstall recalled jovial memories of New York. Truly a musician for any occasion.

‘Feel It All’ was completely dis-attached from its own recorded version. Enlivening the intimate surroundings it almost became a ‘I Forget Where We Were’ era Ben Howard track – the piercing blues that tore out from her guitar wildly followed by Tunstall’s own whiskey-stained voice created silence whenever it dropped. Taken from her fourth studio album ‘Invisible Empire // Crescent Moon’, it signals a maturation in sound for her and a shift that she has grown along with her audience.

And this is her true power. Growth. ‘Other Side of the World’ – a wistful song about the damages of long distant romance, the crumbling nature of Tunstall’s towering, soul touched voice constantly becomes the crux of this tragic number – ‘Suddenly I See’ – her Ivor Novello winning composition, it’s illustrative of the 37 year old’s past bullish sound, complete with the radio-friendly melodies that are commonplace even now 10 years on – and ‘Black Horse & A Cherry Tree’ – crisply built, Tunstall layered everything from audience handclasps, guitar box beating and shrill backing vocals, she soon launched into a round of The White Stripe’s classic ‘Seven Nation Army’ augmented with an infectious kazoo solo line – are all tracks that formed Tunstall. But with the likes of the moving ‘Made of Glass’ and ‘Through the Dark’ now forming the real heartbeat of her set, venues such as City Winery will now be the requirement to truly allow the heartache and destruction to strike out.

In some circles Tunstall is the forgotten woman of radio. But she doesn’t need that any more. She’s got other more important stories to tell that aren’t as friendly. She’s moved on.

For more information on KT Tunstall visit her Facebook, her official website : kttunstall.com. She tweets at @KTTunstall.