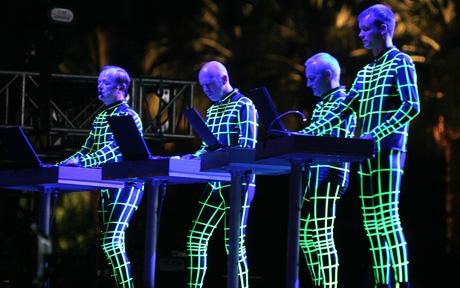 Ralf Hütter turned 74 yesterday. His work with Kraftwerk has had an immeasurable impact on music and culture. I’m no exception, consider him a hero, and 90% of the reason I make electronic music. 100% when you factor in that the other influences wouldn’t exist without Kraftwerk.

They were my first favourite band, when I wasn’t even six years old. A maverick DJ on Chicago’s WLS was playing the radio edit of Autobahn. He often referred to them as “The German Beach Boys,” owing to the “Fahrn Fahrn Fahrn” chorus, which sounded like a Teutonic spin on “Fun Fun Fun.” They are both road songs, right? It’s incredible, though, that the former was released only a decade after the latter. That’s not a long time to invent the future.

Which is precisely what they did. It’s no accident that Chicago House, and Detroit Techno, were developed in the shadow of WLS’s broadcast range. Combined with the influence of New York heroes like Frankie Knuckles, who headed west to spread the gospel of Larry Levan and The Paradise Garage, Detroit’s own Psych Boogie band, P-Funk, and the beloved Motor City DJ, The Electrifying Mojo, Kraftwerk’s vision of a post-race techno world was furthered by a new group of visionaries, before it headed back to Europe. In fact, it started an ongoing conversation, involving artists like Cybotron, Afrika Bambaataa, and Egyptian Lover, to name a select few. Kraftwerk acknowledged this by sanctioning an Underground Resistance remix of Expo 2000. Drexciya’s concept of a post-slave trade underwater utopia, with its Aquabahn, is clearly connected. Chicago’s own purveyor of noise rock, Steve Albini, has mentioned countless times that Kraftwerk is a lifetime favourite. His band, Big Black, even covered The Model in their inimitable style. Throbbing Gristle and their many industrial children, Gary Numan, New Order, Devo, Public Image Ltd, Aphex Twin, Wilco, Daft Punk, Coldplay, Air, Factory Records, Mute Records, Ghostly, hfn, Warp – the list is endless, endless.

Giorgio Moroder and Donna Summers’ classic I Feel Love is absolutely a fusion of Kraftwerk and early disco. Same goes for Britain’s ‘80s synth explosion, itself an extension of something David Bowie, a fan and friend of the band, had started. All electronic pop and dance music owes some sort of a debt to our kids from Düsseldorf. Credit where it’s due to Derbyshire, Oram, Subotnick, Ciani, and Carlos, but they weren’t making what you might call “catchy” tunes on their devices. With so much modern music incorporating synths, robotic vocal treatments, and electronic percussion, it’s hard to avoid Kraftwerk’s DNA in, well, anything.

Coming of age in postwar Deutschland, Ralf Hütter and Florian Schneider were privileged enough to go to art school. They were enamoured of perhaps the only German composer who wasn’t verboten in those years, Karlheinz Stockhausen, and started playing music together. As the nascent, diverse motorik scene (lazily referred to as “krautrock” by the British press) was taking off, they and their peers tapped into the ambient sounds of a rebuilding Germany, incorporating its influence into their music. After a few shaky starts, they began to break away from that movement, but some of the key elements remained. Which is to say that a loose collective of lefty art students, with a penchant for prog rock, trying to work outside of the construct of a stale formula, gave birth to the second most influential band in history.

Most people think of Hütter as the only member to be in every iteration of the band, and indeed he’s been on all of the recordings, but there was a period where he took a hiatus to finish school. In his stead were Michael Rother and Klaus Dinger, who would go on to form massively important groups like Neu!, Cluster, and La Düsseldorf.

These days the band is down to just Hütter and three others, two of whom have been in the group longer than the classic lineup (Hütter, Schneider, Karl Bartos, and Wolfgang Flür) existed. Schneider left a decade ago, and passed away last year. Kraftwerk has always been a finicky endeavour in many ways. They are never out of character, to an almost comical extent, and Hütter will issue a C&D to anyone even looking at their songs the wrong way, but their perfectionism has meant there has been no shoddy output. Electric Cafe, aka Techno Pop, may be fans’ least favourite in many cases, yet it’s still super.

I first saw Kraftwerk on the Tour De France Soundtracks tour. My electronic genius pal, Mike Walters, and I drove five hours from Chapel Hill North Carolina to Washington D.C. What would have normally been a hard slog, driving back in the middle of the night, was a piece of cake because we were brimming with energy, having fulfilled a lifelong dream. They don’t often play in the U.S., and they were getting older then, so we had no idea if that would be the first and last time. Luckily I’ve caught many more shows, three of them kind of… all at once. Moogfest is the type of event where bands do something unique. Gary Numan famously played his first three albums in a row at it, one per night, in 2016. In 2014 Kraftwerk played three sets over two evenings. I was at all of them. By the third show, most people who wanted to see them had, so I was able to stand about 15 feet from Ralf and watch everything up close. Fan or not, I had always figured the live presentation was mostly a push-the-start-button-and-go affair, but I learned that wasn’t the case at all. Over the three performances I realised they can do longer or shorter versions of songs, go into a “jam” section, the length of which isn’t predetermined, and the set list varies per show. Hütter was clearly skippering the ship, but those robots were also exercising quite a lot of autonomy. Moogfest was probably the only control group that could present the opportunity to learn that, and it was myth-destroying in the most positive sense.

It seems impossible that over three quarters of a century one musikarbeiter could be instrumental in the creation of multiple forms of dance music; 220 bpm industrial, post punk, power electronics, synth pop, ambient, arguably Bowie’s most daring phase, shoegaze, when you consider how completely inspiring they were to Spacemen 3 and also create the soundtrack that B-Boys to pop and lock to.  As if this weren’t enough, it often works as kids’ music too – I’m living proof of that, and as I grew older I realised Numbers, Pocket Calculator, and The Robots would have been right at home on Sesame Street. We haven’t even got into the non-musical impact…

As other aging artists move from their roles of spearheading to reacting, struggling to remain relevant, Hütter, along with his colleagues, has not only moved into the future, he’s predicted it, time and time again, and will likely continue to do so.